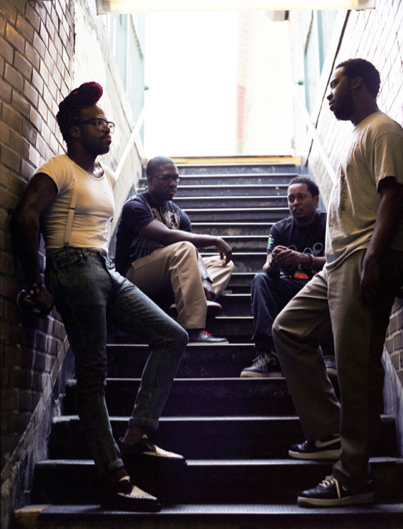 Rating: 5/5 (Disclaimer: I must admit that I have a bias for socially conscious rap and experimental jazz.)

My musical interests vary. From The Gaslamp Killer to Cocorosie, I really do enjoy listening to a coalescence of sound that changes the way I think about music and forces me to stop and consider how its creator meant for it to be experienced. Be it experimental, abstract, or an old jazz standard, if it has that intangible quality of ‘flow’, I’m down for giving it a listen.

With a handful of covers in its track listing, Black Radio is one of those albums not easily absorbed in just one listen. The premise seems simple enough. What remains of a ravaged musical landscape is the substantive essence of music, the soul, that transcends time. In essence, it is reaching out to the sublime; it achieves that enduring artistic quality that touches people no matter the place, no matter the time. Within the context of the album, the sublime takes the form of a black box. Yep. Just like the ones recovered from plane crashes. The jam session embarked upon at the beginning of the album starts out with a mic check that introduces you, like a flight attendant instructing passengers on the proper way to buckle up, how to listen to what you are about to hear.

“Now as we prepare for our lift off, you need only two things to direct your course: your ears and your soul. I bring to you the Robert Glasper Experiment. Experimentation for meditation.”

All said, the album ends with a somewhat eerily improvisatory version of Smells Like Teen Spirit. It must be said, the last track is fairly haunting for an album that deftly weaves interweaves themes of love (Ah Yeah, Consequence of Jealousy, Letter to Hermione) in and out of others themes, such as social justice (Always Shine, Black Radio), music appreciation (Gonna Be Alright (FTB)), and a general sense of camaraderie (Cherish the Day, Why Do We Try) between the artists that collaborate on this album. Despite the initially surprising last track, though,Â Smells Like Teen Spirit is an appropriate end note for a concept that necessitates a crash of sorts to make its point.

I enjoyed the entire album, especially the covers. Glasper has a predilection for Herbie Hancock covers, but there aren’t any on Black Radio. Rather, there’s a fleshed out version of Afro Blue, in which Erykah Badu brings to life Mongo Santamaria’s original instrumental track. There’s Bowie’s Letter to Hermione, fromÂ Space Oddity, which createsÂ a pleasantly smooth progression towards the grand finale in Smells Like Teen Spirit, an odd juxtaposition of automated and distorted vocals and a funky groove that drips with warm. What really ties this track together is the pervading sense that the band is playing in some kind of strange otherworldly pocket*. It just sounds so effortlessly woven together and yet it is really disconcerting at the same time.

I swear from James Mercer’s September to Robert Glasper Experiment’s Ah Yeah, the videos for love songs featuring primarily words and little else are going to do me in this spring if the trend keeps up.

Listen to Black Radio in its entirety at NPR.org.