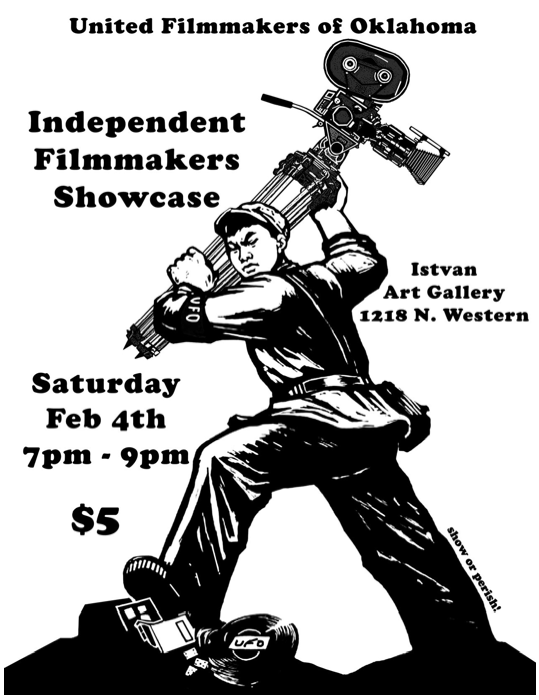 We met members of United Filmmakers of Oklahoma at the 2011 deadCenter Film Festival just as they were getting started. We’re happy to report they’ve made films since last summer and that they will be screening them this Saturday at Istvan Gallery.

If you’re unfamiliar with the United Filmmakers of Oklahoma (UFO), don’t worry. Even though their organization started back in April of 2011, they’ve been tireless in their efforts to build a community of filmmakers here in the Oklahoma City metro. Since their inception, they have been steadily growing in visibility. They have participated in the Plaza District’s “Live on the Plaza” events and did a lot of networking during the deadCenter Film Festival. UFO consists of working filmmakers here in Oklahoma and has collective plans for a variety of diverse film projects. All skill levels are welcome in their group.

To that end, they’ve been making movies on top of building their membership. The “Independent Filmmakers Showcase”Â  will be held on February 4 at Istvan Gallery in Oklahoma City where UFO will screen an eclectic mix of cross-genre short films and music videos.

â€œWe are very excited about this opportunity to present a fun night of exciting and provocative Indie Filmmaking,â€ states UFO Board Member Rachel Fansler.

The “Independent Filmmakers Showcase” will feature UFO produced short films as well the independent work of UFOâ€™s members. The cost for admission is $5 and the screening will be hosted by Istvan Gallery at 1218 North Western in Oklahoma City. Refreshments will also be provided. This is an all ages show, but there will be adult content, so please be advised if you plan to bring children to the screening.

UFO describes themselves as: “an ever expanding group of directors, writers, actors, artists, producers, crew people and volunteers in the Oklahoma City and surrounding areas that come together for the sole purpose of creating independent films.”

You can find them at their website: United Filmmakers of Oklahoma

There’s also their Facebook group where you can network and find participate in their meetings and projects: Oklahoma Filmmakers Facebook Group.