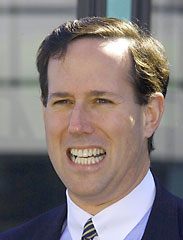 I can always tell, because my email inbox starts to fill up with desperate appeals for cash from various political causes and campaigns. The most entertaining thing about these emails, aside from the fact that I always list my cats when forms ask for my name (â€œMr. Breakfast, do you want to hold Republicans accountable?â€) is the ever present sense of besieged panic, usually accompanied by a youtube clip of some damn fool thing one of the Republican candidates said recently.

After Rick Santorum’s surprisingly good showing in Iowa, I got a few emails rehashing some of Rick’s greatest hits from the past. The most famous one is this:

â€œIn every society, the definition of marriage has not ever to my knowledge included homosexuality. That’s not to pick on homosexuality. It’s not, you know, man on child, man on dog, or whatever the case may be. It is one thing. And when you destroy that you have a dramatic impact on the quality.â€

Anyone else spot the logical fallacies here? This is your classic red herring, with a side of slippery slope. No one is suggesting that marriage should be open to man on dog relationships. I think the vast majority of humans and dogs are pretty satisfied with the status quo on that matter.

I support gay marriage, mainly for economic reasons. If you’ve ever been to a gay neighborhood on Halloween, you know that this is not a community that typically does small, quiet events. The economic impact on the chocolate novelty industry alone would be dramatic. I also support it philosophically. An adult man and an adult woman are both responsible enough to make their own decisions and enter into relationships. An adult man and another adult man or an adult woman and another adult woman are responsible enough make their own decisions and enter into relationships. Since some folks seem to have a really hard time figuring out that consensual gay sex is different from beastiality not only in degree but in kind, here is a brief explanation:

A dog is not competent to make adult decisions. You couldn’t sign a contract with a dog and expect a court to execute it. The same goes for children, house cats, someone in a coma…you can, however, make a legally binding contract with a lesbian, and two lesbians can make legally binding contracts with each other. I don’t think that anyone would argue that dogs have legal standing. You can give away your dog, or sell it, or have it put down. If you are having sex with your dog, you are, in legal terms, having sex with a piece of property.

What Santorum doesn’t say here (but has said elsewhere) is that he feels heterosexual sex is more moral than homosexual sex because only heterosexual sex can result in procreation. That logic would suggest that all contraception and the entire idea of sex for pleasure are inherently immoral. Santorum, ever consistent, thinks states should be able to ban that also. This is my main problem with Rick Santorum, aside from his generally condescending mannerisms. His attitudes towards sex suggest that Rick Santorum believes that it is the role of the government to mold the private behavior of individuals into something more theologically acceptable to Rick Santorum. I don’t think most people want that. I tend to be of the mind that you should be able to do whatever the hell you want, so long as you don’t hurt anyone else in the process.

That raises the question: does the official endorsement/sanctification of gay relationships harm the society? I guess I would have to see evidence of that, and I haven’t seen any. I can’t think of any other allegedly destructive behavior that raises property values quite as consistently as gay people moving into a neighborhood. The majority of the LGBT people I know are far more responsible and pro social than I am; most of them have jobs and everything. I would wager that most gay people are as qualified for marriage, or perhaps far far more so, than I am. If you accept that we live in a secular state, and that there is a rational reason for a secular government to be involved in promoting something like marriage, that rationale should apply equally across the board. The Church may grant marriages because it wants women to drop as many babies as possible, but that’s not why the government grants civil marriage licenses. As I understand it, the argument for civil marriage is that there is a positive interest to the society in promoting stable relationships, because, statistically speaking, people who are married tend to be financially better off, less inclined to engage in dangerous and criminal behavior, have fewer sexual partners and transmit fewer diseases, etc. All of that is also true of gay people in stable relationships, and it is a positive social good in that context as well. You could make a strong argument that the government has no business being involved in promoting what is essentially a religious rite, but so long as marriage is a civil institution, it should be applied equally to all people with legal standing, IE: competent adult humans.

Just remember, guys: get the prenup.