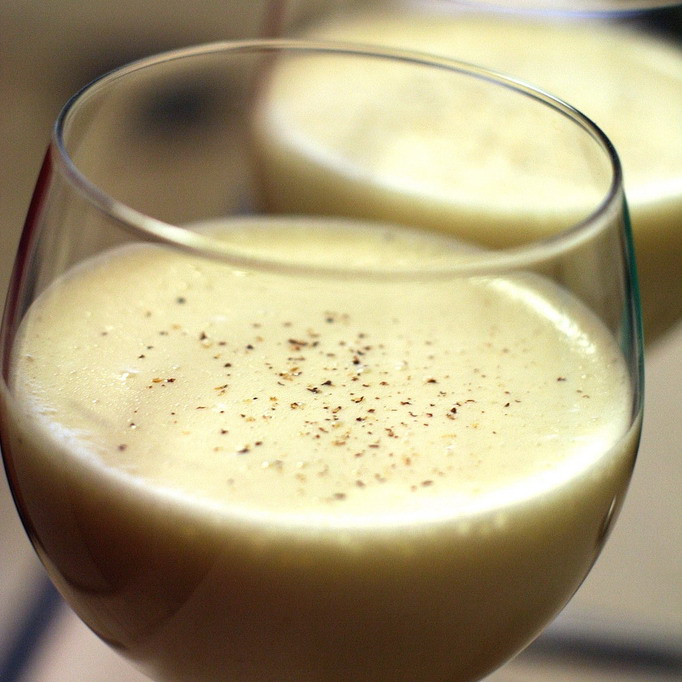 There are so many things that vegans donâ€™t eat, that you wouldnâ€™t think egg nog is that big of a deal. Most people donâ€™t even think about egg nog for most of the year, and can go years without drinking it. But for some, the craving for egg nog hits hard, usually in early December while the halls are being decked, the chestnuts are roasting by an open fire, and the stockings are being hung by the fire with care. What is a vegan with a serious hankering for egg nog to do?

Thankfully, several companies have started making vegan egg nog that you can buy at groceries and natural food stores. For DIY vegans, there are a variety of more or less appetizing homemade recipes on the internet.

Vegan egg nogs are also a great choice for partiers who want to imbibe some holiday cheer, but would like to avoid the obscene amount of fat and calories in traditional egg nogs. The egg nog produced by a certain local dairy distributor who shall not be named, has 420 calories per cup, 22g fat and 8g protein. (Most websites list the calories per Â½ cup, but really, who drinks just Â½ cup of egg nog?) For comparison, most vegan nogs have less than half the calories, and one quarter of the fat of traditional nogs.

Another advantage of vegan nogs is a much-reduced risk of food poisoning. If the idea of a bout of holiday salmonella poisoning leaves you cold, then a pasteurized vegan nog might be just the thing for you. Though there are ways of killing the bacteria in the raw eggs, simply adding lots of booze is unfortunately not one of them.

For your holiday drinking enjoyment, all three commercial varieties, and the best homemade recipe are reviewed below. Happy holidays, and please drink your nog responsibly!

Earth Balance is best known for making â€œbuttery spreadsâ€ but to the delight of vegans everywhere, has recently come out with a holiday soy nog. This nog is your best bet for a rich, thick, egg-nog flavored beverage. It mixes seamlessly with all kinds of liquor, and is delicious straight out of the carton. If you have a burning desire for egg nog, then this beverage will put out the fire. Surprisingly, it also has the lowest amount of fat and calories of all the commercial nogs. Earth Balance Nog can be found at Whole Foods, Sunflower Market and Akins.

So Delicious, which makes a variety of delicious frozen desserts, has now tried its hand at soy nog. Though the coconut milk-based produced has a rich, thick consistency that can really coat a glass, it has little actual egg nog flavor. It has a pleasant coconut taste, and would probably make a good smoothie or piÃ±a colada. Unfortunately, it does not satiate that egg nog longing, even when adulterated with a splash of rum and a generous shake of nutmeg. However, it does mix nicely with alcohol, so if you drink egg nog solely as a vehicle for bourbon or rum, then bottomâ€™s up! So Delicious Coconut Nog can be found at a variety of local health food stores and some Crest Foods locations.

Silk, one of the best-known names in soymilk, has made soy nog for many years. Though it has the most nog-like flavor, it is sadly lacking in the consistency department. The beverage is essentially flavored soymilk, and has the same thickness and soy aftertaste as regular soymilk. The most unfortunate characteristic of Silk Soy Nog is that it curdles when mixed with alcohol. Though still drinkable, a glass of curdled soy milk with bourbon floating on top doesnâ€™t exactly inspire holiday cheer. However, it is the most widely available nog and can be found at Wal-Marts, Homelands, and health food stores in the metro. This product is a good choice for teetotalers and people who canâ€™t get to a specialty food store. FYI, when mixed in equal parts with the So Delicious Coconut Nog, the mixture approximates the same noggy goodness of the Earth Balance beverage.

If youâ€™re going to try one homemade nog recipe this holiday season, then try the Matrioshka Nog from the Post Punk Kitchen Website. This site is run by Isa Chandra Moskowitz who is a vegan goodess and author of seven vegan cookbooks. If anyone is going to publish a drinkable vegan nog recipe, itâ€™s her. The Matrioshka Nog has a pureed avocado, coconut milk and almond milk base, and is pleasantly seasoned with cinnamon, cloves and nutmeg. If you like avocado smoothies then this is the nog for you. Itâ€™s tasty and mixes nicely with alcohol, but it has a slightly pale green color and a distinct avocado flavor. It doesnâ€™t quite taste like egg nog, but if youâ€™re concerned about eating fresh, natural foods, then this drink will suffice for your egg nog needs.

No nutritional information available, but the recipe is full of good fats, and the sweetness can be adjusted as desired.

Whatever youâ€™re drinking this holiday season, I hope it is delicious and nutritious and that it makes your holidays a little brighter!

One comment to “Egg-Not: No Egg, No Cream, No Problem”