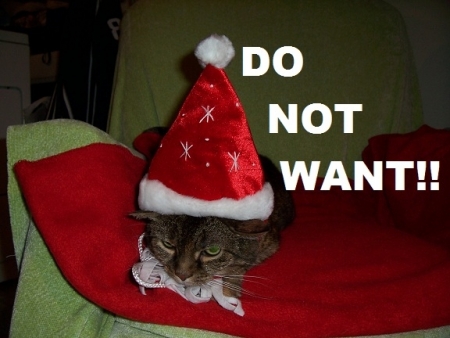 For a long time, I was firmly in the anti-Christmas Music camp. Not by coincidence, this was a time during which I worked at a retail store, in direct contact with holiday shoppers. I have looked into the cold eyes of Black Friday and Christmas Eve shoppers alike, and I have been terrified. The closer I got to the holidays, the more closely I associated colorful decorations and Judy Garlandâ€™s unmistakably sad, clear voice with the jerk in front of my register demanding- with colorfully decorated language- a new cappucino that tastes more like 7-11â€™s.

Letâ€™s say I went on Christmas strike for a while.

Now, with a few years between me and that experience, I still have a strong distaste for runaway consumerism, but Iâ€™m â€œthat personâ€ with decorations up before the turkey leftovers have been formed unholy alliances with whatever else is in the fridge.

What changed? Â Well, a couple of things. First, my job. Honestly, if I was still in retail I might still feel awfully grinchy right now. Second, the ability to put lights on my house. It may sound odd, but there is something about putting up lights that feels like building community: itâ€™s like this tacit agreement with your neighbors to silently celebrate together, and to make your street look a little more beautiful.

Third, Christmas music. I love good Christmas music. I grew up with the classics: Bing Crosby, Ed Ames, Frank Sinatra… and that was about it. Iâ€™ve got great memories of this music, but it wasnâ€™t until I was an adult and someone gave me a mix CD of â€˜grown-upâ€™ Christmas music that I realized there was much more out there.

A misconception is that most Christmas music is impossibly saccharine. Sure, some of it is. That Hippopotamus song makes my eye twitch. But it doesnâ€™t have to be screeching jingle bells all the time, if thatâ€™s not your thing. The best, most consistently resonant seasonal music is full of emotion, and not always joyous. Christmas music can be giddy, soaring, jazzy, dark, solemn, reverent, or irreverent. Many of the songs that we consider standards were written during wartime, and themes of being separated from loved ones pop up often.

Going further, the most well-known and well-loved songs have been covered by many different musicians, so each of the covers hopefully adds a new layer. I say â€œhopefullyâ€ because there are a lot of turkeys out there, treading ground that others have done better. There are also, of course, truly terrible original songs. â€œGrandma Got Run Over By A Reindeer,â€ Iâ€™m looking at you. The enduring popularity of this song makes me weep for humanity.

So you have to sift. Building playlists on sites like Rhapsody or Spotify can be a great way to go through what is out there- it’s a lot.

If youâ€™re still reading this, you may have realized at some point that I think way too much about Christmas music. Luckily for you, you donâ€™t have to: Below are two sample lists.

Music to deck the halls by:
These songs are great for the beginning of the season, before you get sick of the BC Clark jingle. This is music for getting IN the holiday spirit.

Dolly Parton â€œO Little Town of Bethlehem.â€ This woman can still out sing anyone.
Barenaked Ladies and Sarah McLachlan â€œWe Three Kings/ God Bless Ye Merry Gentlemenâ€
Reverend Horton Heat â€œRun Rudolph Runâ€
Bing Crosby â€œItâ€™s Beginning To Look A Lot Like Christmasâ€ You thought I was going to go with White Christmas, didnâ€™t you?
Darlene Love â€œChristmas (Baby Please Come Home)â€ One of my very favorites.
Indigo Girls â€œAngels We Have Heard on Highâ€ Amy and Emilyâ€™s trademark harmonies shine through.
Elvis Presley â€œBlue Christmasâ€ Accept no substitutes- covers of this song tend toward the sappy. Only Elvis makes holiday loneliness sound like fun.
Wham â€œLast Christmasâ€ Is it cheesy fun or cheesy awful? You decide.
Heart â€œAve Mariaâ€
Kay Starr (from the Christmas Remixed 2003 album): â€œIâ€™ve Got My Love To Keep Me Warmâ€ Definitely look for the remixed version.
Ed Ames â€œDo You Hear What I Hear?â€ This song is a story, and Ed Ames delivers it as such.
Josh Groban â€œSilent Nightâ€ Seriously, itâ€™s ridiculous that he sings this well. A bring-you-to-tears beautiful voice.
Sufjan Stevens â€œI Saw Three Shipsâ€ Sufjan has a three-disk holiday set, full of standards and originals.

Bah Humbug mix.
This isnâ€™t really â€˜I hate the holidaysâ€™ music. This is music that you listen to when youâ€™re maybe sick of the usual stuff, are still trying hard to maintain a positive attitude while finishing your Christmas shopping, and then just got flipped off by a terrible driver in a Santa suit.

The Pogues â€œFairytale of New Yorkâ€ includes a lovely, soaring chorus, a distinctly Irish aspect, and the lyrics: â€œHappy Christmas your arse, I pray God itâ€™s our last.â€
The Kinks â€œFather Christmasâ€ I want this one to become a classic.
The Superions â€œFruitcakeâ€ The Superions includes the voice talents of Fred Schneider (formerly of the B-52s). silly, trippy, disco fun.
Aimee Mann â€œYouâ€™re a Mean One, Mr. Grinchâ€ Thatâ€™s right. Aimee Mann has a Christmas album.
Melissa Etheridge â€œMerry Christmas Babyâ€
Cyndi Lauper and The Hives â€œA Christmas Duelâ€ This could be a prequel to The Poguesâ€™ song at the beginning- a lively, danceable melody against bitter, raunchy lyrics
Twisted Sister â€œO Come All Ye Faithfulâ€ Itâ€™s kind of eerie how their delivery of this song mirrors their hit â€œWeâ€™re Not Gonna Take Itâ€
My Chemical Romance â€œAll I Want For Christmasâ€ Yes, this is a cover of Mariah Careyâ€™s song, and yes it rocks.
The Waitresses â€œChristmas Wrappingâ€ This song just sounds like the 1980s. Itâ€™s almost a modern classic.
Vienna Teng â€œThe Atheist Christmas Carolâ€
Dar Williams â€œThe Christians and the Pagansâ€ A sweet song about bridging family differences.
Judy Garland â€œHave Yourself a Merry Little Christmasâ€** Depressing as hell. In a good way.

Those are my lists. They may serve as great jumping off points for you to build your own holiday list, or you may choose only to listen to Mannheim Steamroller for the next month. Whatever jingles your bells.

**Iâ€™d like to end this essay with a public service announcement for anyone recording Christmas music, ever:

PLEASE, FOR THE LOVE OF ALL HOLLY AND JOLLY, YOU DO NOT EVER, EVER, EVER NEED TO COVER â€œHave Yourself A Merry Little Christmas.â€ ITâ€™S BEEN DONE. YOU ARE IN THE CLEAR AND MAY PROCEED DIRECTLY TO ANY OTHER SONG.

A quick search reveals over 200 recorded versions of this song in the past 60 or so years, by such artists as: John Denver, Babyface, Christina Aguilera, John Tesh, Twisted Sister, Toby Keith, Melissa Etheridge, Diana Krall, Ella Fitzgerald, She & Him, Sister Hazel, Luther Vandross, Chicago, Frank Sinatra, Mr. Hankey, and The Chipmunks. To name a very few. You could assemble an entire box set of CDs, consisting of nothing but different recording artists singing or performing (or butchering) this almost ludicrously maudlin song. Some are good, but many are not.

And after all this, Judy Garland’s lovely, moving version remains definitive.

Actually, speaking of its depressing tone, I wouldnâ€™t mind more covers if artists returned to the original, cheery wartime lyrics:

No good times like the olden days, happy golden days of yore,
Faithful friends who were dear to us, will be near to us no more.

But at least we all will be together, if the Fates allow,
From now on we’ll have to muddle through somehow.
So have yourself a merry little Christmas now.

But do any of us need Toby Keith reassuring us that â€œfrom now on, our troubles will be out sightâ€? (presumably because he put a boot in the troublesâ€™ ass, itâ€™s the American way.)

2 comments to “An OKC.NET Christmas Carol”