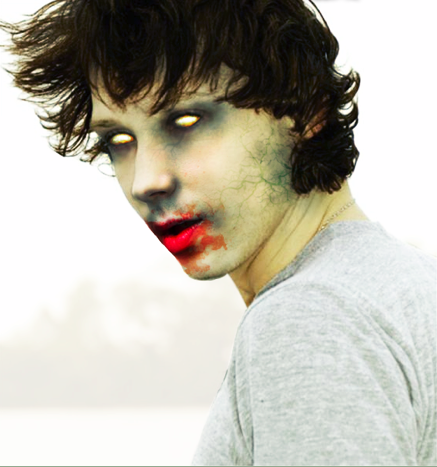 I was making love when the world ended. It was the 23rd. Jill had gotten home late from Christmas shopping, and I’d cooked pasta. I opened a bottle of wine, and one thing led to another. Our sweaty bodies moved in rhythm, set to the sound of David Letterman’s monologue. The television in our bedroom bathed us in its eerie green glow. Jill lay beneath me when they cut to the news report, her short black hair splayed out on the pillow behind her as she wrapped her pale arms around my neck and ran her fingers through my hair. I watched a drop of sweat trickle down her forehead as she bit her lower lip and closed her beautiful green eyes, her back arching. We lay in each others’ arms, bathing in the afterglow of ecstasy when I noticed this wasn’t a normal news report. Jill had drifted off to sleep, but I watched transfixed as the anchors and reporters used words I’d never heard outside of a B movie before: â€œreanimated flesh,â€ â€œvoodoo,â€ and â€œrumors of a government test gone wrong.â€ I woke Jill up, and tears streamed down her face as we watched the blurry news footage of what appeared to be corpses shambling through Manhattan. In typical news fashion, they came up with a politically correct term for them: Walkers.

We lost power yesterday; I guess all this shit finally made it to Denver. Merry Christmas.

It’s been a little over a week since the first news reports, as best as I can tell. It’s close enough to the start of the New Year, at least for the purposes of my journal. Jill and I are setting out tomorrow. I’m not sure where we’re going; maybe the coast; it’d be a week or so at the most to Northern California or Oregon if we stick to the back roads. I think we’d have to stick to the back roads, even if we wanted to get there fast. Initially there were reports of quarantines in Reno and San Francisco, and roadblocks on the major highways. I guess we’ll see. Jill’s scared, and I’m doing my best to be strong, but the truth is I’m scared, too. Forget scared. Scared happened when the power went out. Now I’m fucking terrified.

We saw our first Walker today. It was wearing jeans, a USC Trojans hat, and a ripped white sweatshirt covered in dried blood. We stopped at a supermarket in a small town outside Provo, Utah for supplies. We loaded up our SUV, and were about to pull out of the parking lot when we saw it staggering down the sidewalk across the street. Its jaw was missing, and its skin was tinged with a horrible grey. We kept driving.

Jill and I stocked up on gas today. We don’t have too much further to go, but I’ve still been having nightmares about running out of gas before we get wherever the hell it is we think we’re going. We didn’t really plan this out at all; we just started driving through the Rocky Mountains in the middle of winter and the apocalypse. I guess it’s good it’s just us; I am woefully under-prepared to protect a family. I’m a fucking teacher; I can’t do any shit that’s useful. If our car breaks down, we’re fucked. If we run out of food, I can’t hunt, so we’re probably fucked. I know we can boil water over a fire before we drink it, and that’s about it. If our lives depend on me lecturing about the Lincoln-Douglass debates, we might have a chance. Jill was a girl scout, so maybe she has some survival skills we can use.

Our GPS stopped working sometime today. Now we’re just driving west, with no regard for anything else. Jill’s iPhone had stopped working a few days ago. I guess it really is the end of the world when facebook stops working.

I think today is Valentine’s Day. I’ve been keeping tally marks every day, but I can’t remember if January has 30 days or 31. Iâ€™m far too worried about being attacked by Walkers. It’s rained almost every day since my last entry. We’ve seen a few settlements, sparsely populated camps circled by vehicles. I’ve tried to avoid them, though, so far; maybe I’m being paranoid, but there always seems to be a paramilitary group that wants to trade protection or supplies for…certain things in every zombie movie I’ve seen. I know I’m a little biased, but Jill is gorgeous, and I don’t know what they would do to her.

I killed my first one today. We were at a Target in the middle of nowhere trying to find warmer clothes; the sleet started in, and our coats and shoes got soaked changing a tire. Jill was trying something on, and a rack of shoes fell over; a Walker with an eye hanging out of his socket lunged at me, shoeboxes crunching under his clumsy feet. I pushed the next rack over onto him as he tried to stand up. His arms were trapped under him. Without thinking, I started stomping on his head. It reminded me of a couple of years ago, right after we’d moved into the suburbs, our first house together. Jill and I tried to carve pumpkins for Halloween. We’d gotten sloppy drunk, though, and ended up just smashing them on our porch, and throwing the insides at each other. We couldn’t stop laughing. We took a smelly, pumpkin-y orange shower together, and then made love and went to bed. The next day, we realized we’d forgotten to clean up after ourselves on the porch, and we told our neighbors it must have been high school kids. The neighborhood society started a neighborhood watch because of it.

That’s what it was like as I stomped on the Walker’s head; it was more solid, of course, but once I cracked his skull, it collapsed under my foot, and I felt its brains squishing around my boot, just like the inside of the pumpkins we smashed. Jill came out of the dressing room when she heard the commotion; she found me standing over the Walker’s body, my clothes flecked with blood and dull pink chunks of flesh. We made eye contact and I started sobbing. We didnâ€™t talk about it. We quickly took what we could scavenge and left.

We hit the beach a few days ago; I think we found a more permanent place to stay. We’re somewhere north of San Francisco; we’ve been driving through wine country, I think. The maps we took a few Wal-Marts ago have proved accurate enough so far. We found a little place called Bodega Bay. Jill and I holed up in a beach house here; it’s huge. I never thought I’d see the apocalypse before I lived somewhere with a basement. I guess it’s technically a wine cellar, but still.

I don’t know where these people went, but they left their guns. There’s a shotgun, a rifle, and some sort of pistol. There’s only half a box of ammo for the shotgun, though. We’ve been going to the beach every day. I think it’ll be nice once it warms up a little.

They left their wine, too. We’ve been drinking plenty since we got here; it helps us sleep, and helps us keep from going too hungry; we’re trying to ration our food so it doesn’t run out. Iâ€™m a little worried the people might come back in the middle of the night or that a Walker might find its way in, but I chalk this up to excess paranoia. But then, paranoia might be what keeps us alive.

Last night Jill and I made love for the first time since the apocalypse happened. We broke into a pharmacy in town and found some condoms, some razors, and some shaving cream. I’d tried once or twice before now to initiate something, but Jill wanted to wait until we had some sort of protection. We didn’t talk about it, but I understand why she doesn’t want to get pregnant. People in the movies talk high-minded rhetoric about continuing the human race, but I think we’re past that that point. I don’t want to repopulate the world; at this point, I just want the human race to die with dignity.

Is it bad that we’ve stopped trying to conserve our drinking water, and are using it to shave instead? Does that mean we’ve given up?

Things are bad. There’s no food. I tried to fish with a net we found in the garage after we moved in. I did catch a few things, but stopped several days ago. I pulled the net in, and there were a few fish, a crab or two, and a shoe. It was a child’s size Nike basketball shoe – the kind Lebron James wears. I lifted the shoe up and looked it over. It was heavy when I pulled it out of the net. There was a foot still inside it, with small strings of flesh hanging out of the tattered sock. I wondered what Lebron James was up to, if he was still alive. What do famous people do when the world ends?

Jill has started hunting some; she’s a better shot than I am. She’s killed two rabbits and a few squirrels. Squirrel tastes strange, and sometimes we have to pick pieces of shot out of the meat, because apparently using a 12-gauge shotgun is overkill. I don’t even care. Meat is meat.

Jill and I haven’t talked about what we’ll do when we run out of bullets. I guess we’ll starve. I think the real question, though, is what happens when there’s only one bullet left. It’s hard to think about, but I think I’m selfish. I couldn’t bring myself to hurt Jill, so I think I’d take the bullet, and let her figure the rest out. Maybe we’re already dead, and this is Hell; why else would I have to think about whether I would kill my soul mate or myself?

I want to say I can’t believe she did that to herself, but I can’t bring myself to. Since the food ran out and hunting became scarce, it had come down to a staring contest between us. And she flinched.

I found her in the upstairs bathroom, an empty bottle of wine next to the bathtub. She’d slit her wrists with a butcher knife; I’m not sure how long ago it happened when I found her, but she was still warm. I haven’t buried her yet. I haven’t even been upstairs since then. Shit. I think I might follow suit tomorrow.

I’ve seen more Walkers around lately. Maybe I should just go outside. Maybe that would be enough.

I buried Jill today. It was smelly and terrible and the worst fucking thing I’ve ever had to do. I know I shouldnâ€™t have waited. At least it’s done.

I’m going to wake up and do it tomorrow. I’ve been saying that for a week. There are four shotgun shells left; that would leave three for whoever found me, if I turn into a Walker. They’re everywhere now, even here in Bodega Bay. Where did they all come from?

Today I’m going to find out if what John Lennon says is true. Maybe happiness really is a warm gun.