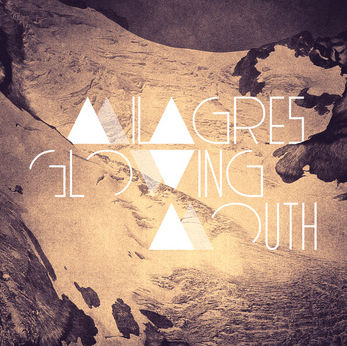 Glowing Mouth is the second album from Brooklyn band Milagres. And if you are unfamiliar with this band here is the rundown: first they were known as The Secret Life of Sophia before changing their name to Milagres, which means â€œmiraclesâ€ in Portuguese. Second, there was a line up change, so now the quintet consists of Kyle Wilson, singer/songwriter, Fraser McCulloch, bass/backing vocals/keys, Eric Schwortz, guitar/backing vocals/percussion, Steven Leventhal, drums/percussion, and Chris Brazee, piano/keys. Third, they re-released the first album Seven Summits when they signed to the Kill Rock Stars label.

The sound on Glowing Mouth is wonderfully atmospheric and easily lends itself to a comparison between The Antlersâ€™ Burst Apart and Washed Outâ€™s Within and Without. Kyle Wilsonâ€™s falsetto never gets as mournful as Peter Silbermanâ€™s spacious whine. Even so, I find it rather amazing no one has yet made the comparison in vocals or instrumentation between these two Brooklyn bands.

Also Milagres keyboard arrangements are not as drenched in 80s synth as Washed Out, although they do share danceable keyboard arrangements. Additionally, you can understand Wilsonâ€™s lyrics whereas Earnest Greenâ€™s lyrics are nearly indistinguishable from all the ambient synth on Within and Without. These distinctions in Wilsonâ€™s lyrical phrasing, when contrasted with layers of sound on the album, make Glowing Mouth really enjoyable.

Still others who are tracking this band make the comparison between Milagres and Grizzly Bear, Beach House, Arcade Fire, Prince, and Radiohead. And if pressed, Iâ€™d say Lost in the Dark, a track on Glowing Mouth, reminds me of early to mid 80s Duran Duran drum machine and synth pop, which is then intensified with the addition of expansive percussive instrumentals that call to mind peppy Vampire Weekend-like beats. Whatever the eclectic resemblance, Glowing Mouth is an album that echoes with catchy, catchy ambiance.

The opening track, Halfway, features dense layers ofÂ  piano, keyboard, and percussion, which are then alternately muted and expanded upon within the various songs on the album. Halfway is a fitting teaser for all that follows.

The melodic elements of the piano and keyboard heard in Halfway are rearranged on Here To Stay, which is slightly faster paced, if not urgent and restless. And from there, the thread of tension is carried into the song Glowing Mouth. For me, this track captures Wilsonâ€™s falsetto at its most voluminous. Although Wilson drops octaves in all the right places in this song too, which is something he does throughout the album. And this play with pitch seems the natural choice for making his lyrics pop and sparkle amid all the dreamy beats and ambient fuzz.

One of my favorite songs on Glowing Mouth is Gentle Beast. It carries the tension from previous tracks with its piano and keyboard arrangements, but thereâ€™s a lyric I just find so catchy that it seems to sum up the entire song: â€œIts like the wolves howl out at the wind/when they know thereâ€™s nothing to kill and no mate to win/And when the snow comes the beast puts himself to bed.â€ And there is definitely a wolf-like whine heard in the instrumentation on Gentle Beast.

As mentioned, Lost in the Dark has a Duran Duran vibe. It starts out with repetitious harmonies and guitars before synth and drum machines start kicking things into gear. But the album shifts in pace again when Fright of Thee opens slowly and Wilsonâ€™s falsetto alternates with a deep, almost Matt Berninger-like, broodiness.

In Moon on the Seaâ€™s Gate the album dives into more classical guitar arrangements. Here Wilson alternates fluidly between airy falsettos and plunging octaves as the song intensifies with the punctuation of pensive strings. It is as if he is mountain high and ocean low all on the same track. And Moon on the Seaâ€™s Gate sets the tone for the second half of Glowing Mouth as desire and longing continue to entwine.

Sonically Gone is a little lighter and upbeat compared to the previous track and it brings back the piano and keyboards, but lyrically it touches upon a love thatâ€™s been lost. So forget happy and content with lyrics like these – â€œLittle spirit of the parking lot/buildings springing up from your heart/When Iâ€™m sad I just wonder where you are/but youâ€™re gone.â€

To Be Imagined takes plucky melodic strings and drowns them in fuzzy guitar dissonance that is additionally layered with steady rhythms and then accentuated by Wilsonâ€™s falsetto. And I think it is probably the fuzziest track on the entire album.

Sonically Doubted is the complete opposite of To Be Imagined, but thematically it is just as sad. And it seems like the most piano driven song on the album. Strings accent tension by underscoring the edgy piano arrangements. And about midway through the song the percussion starts in and slowly builds to a rumbling point, which deepens Doubtedâ€™s conclusion at the close of this album â€“ â€œI donâ€™t read it in the papers/ donâ€™t hear about it on the news/ but now Iâ€™ve felt it in the deepest guts and Iâ€™m just following the feeling/Love was in my nature/ I just had to come to it/ You just had to come to me, now.â€

Itâ€™s a beautiful song that ends one of the most gorgeous albums Iâ€™ve heard all year. And that is saying quite a bit, because I feel The Antlerâ€™s Burst Apart is completely stunning too. The more I listen to Glowing Mouth the more I become hooked. Milagres will be visiting Oklahoma on October 10th when they play the Opolis in Norman. I’m thrilled. If the members of Milagres decide to get indulgent with their instrumentation during a live show, I think itâ€™s safe to say that I will be awash in so much dreamy ambient rock that I wonâ€™t care if their songs keep me out past closing time.