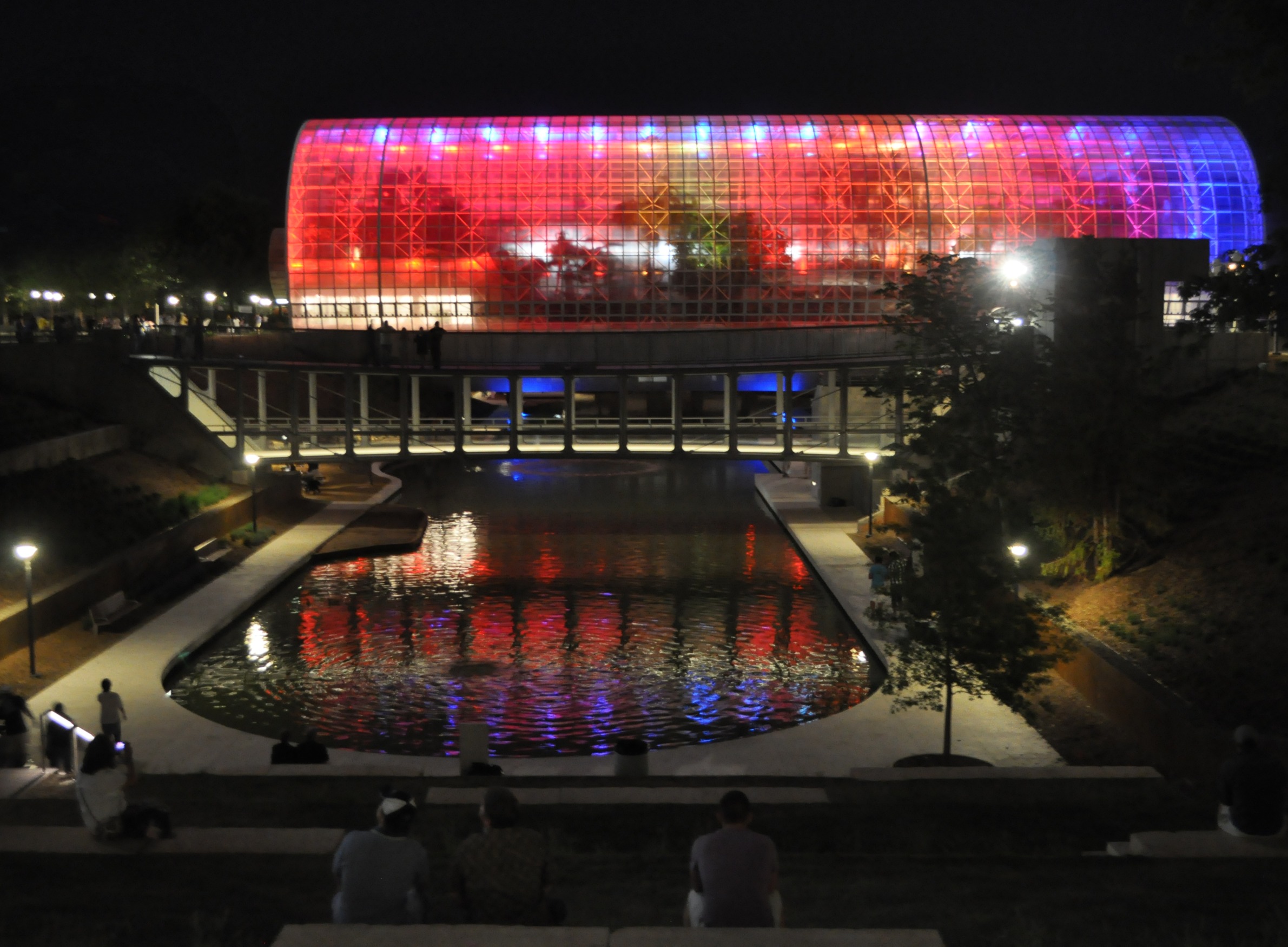 Everywhere I go, people are having the same conversation. Whatâ€™s happening is rather remarkable. Everyone is starting to reflect on Oklahoma City, and not just specific parts of it â€“ theyâ€™re looking at the whole and thinking about it abstractly. When addressing the symbolic Oklahoma City in their imaginations, it becomes clear that the city is changing and progressing. People are getting excited about where they live.

One very relevant conversation is stuck in my brain, even though I had this conversation a few months ago. I was standing outside The Buffalo Loungeâ€™s Pre-Norman Music Festival show in Norman, engaged in a ridiculously exciting conversation with two prominent OKCitians while Jabee roused the audience inside. Our talk was frenetic, words overlapping, with a lot of enthusiastic agreeing, building toward a conclusion.

First, we spoke about the monumental success of The Buffalo Lounge at SXSW, constructed so beautifully by The Idea Collective (David Kittredge and Ginger Roddick, operating out of a gorgeous, ethereal space called â€œ5â€ in Norman). The consensus seemed to be that Oklahoma had accomplished something remarkable in Austin- standing out in the maelstrom of 6th Street on the strength of music and hard work alone. In the gimmick saturated streets of SXSW, the understated class of the Lounge was thrown into sharp relief. I remember during The Pretty Black Chainsâ€™ show at the SXSW showcase, a young Austinite came up to me and said, â€œThis is what Oklahoma music sounds like? I love it! I am moving there!â€ and then she danced away.

What excites me is that I get to be involved with so many people that are not only espousing some really wonderful, game-changing ideas, but that are actually doing something about them! I canâ€™t stand the â€œall-talkâ€ crowd. Iâ€™m restless until I land on a group of people that are actualizing ideas. And Iâ€™m finding these â€œdo-ersâ€ everywhere all of a sudden.

It was not always thus. In New Yorker journalist Mark Singer’s book Funny Money, about the Penn Square Bank collapse, he paints a rather dire portrait of OKC in the mid 1980s. â€œThe road surface evaporates as Downtown presents itself-a canned silhouette of undifferentiated boxes, many of them covered by aluminum or whatever that material is that buildings are wrapped with to divert attention from their missing details. The glare deprives the senses and the whole place seems to evaporate. You look into the foil and try to reassure yourself that you know where you are and that it is someplace.â€

Since those gray days, Oklahoma City has not only become Someplace, but has become a rather successful someplace. This is not booster-ism, this is fact. Oklahoma City has prospered in the past 10 years in ways that most other mid size and large cities have not. There seems to be something more profound at work here than a mere economic boom, however. None of the booms or subsequent busts of the past have resulted in the sort of cultural tipping point that we seem to be experiencing here and now.

As we stood on the sidewalk and talked, the three of us drew closer as we tried to define the essence of the city, comparing it to others (Seattle, Portland, Austin) that have gone from small-market to global-market â€“ which Oklahoma City is on the cusp of doing. Yet, with pride we confessed that there was still some ineffable “something” that sets Oklahoma City apart from others.

A friend of mine said Oklahoma City is great because itâ€™s a blank slate anyone can write anything on. But itâ€™s not that. If Oklahoma City is a slate, itâ€™s not blank at all. In fact, itâ€™s covered in archaic script from years past- Pronouncements and decrees from the Good Families, photos of the old boys at The Club, the codes and protocols of the way things are done here, the way they have always been done. I grew up in that Oklahoma City, but I don’t feel like I live there now. In the last few years, someone slipped us a chisel. Weâ€™re hacking away at all of that, carving out the bass relief of a new city. In this new city, Pho is as ubiquitous as Chicken Fry. In this new city, Charlie Christian and Ralph Waldo Ellison and Wayne Coyne and Bruce Goff are as much a part of the local culture as Barry Switzer and Sam Bradford. We create this new city every morning when we wake up and choose to live in it. The annual young artists exhibition here is called Momentum for a reason. Like it or not, and some people certainly don’t like it, something is happening here, and it’s not possible to stop it, any more than it was possible to start it. With the current critical mass of people working to make this city a better place to live, and all of these same people beginning to talk to each other and collaborate, a fascinating intermodal community is developing. We are in the midst of a city-wide convergence of cultural zeitgeist.

Oklahoma City is peopled by passionate individuals who are stamping their personal vision wherever they can, because they can. Oklahoma City represents a bastion of freedom, a place where ideas can take off, a proving ground for whatever out-there concept you want to try. There are no limitations, only potential.

The Plaza District is proof. A few years ago, no one â€“ save its residents â€“ had heard of this little area of the city. There wasnâ€™t much down there besides Wayne Coyneâ€™s epic house, some spotty grocery stores, gas stations, and a lot of crime. If you head down there for LIVE on the Plaza (and you really should because itâ€™s great fun), youâ€™ll find yourself in the thick of beautifully appointed art galleries, shops, antique stores, tattoo parlors, photo galleries, live music, drum circles, taco trucks, a theater, and a community of bright young things that hum along to the beat of the district. This happened in only a few short years. In that same period of time, a local comedy scene willed itself into existence, 9th street became Eat Street. Some people wanted to go to a film festival, so they started one. Doug Schwartz just had a music festival on his farm because he felt like it. 800 people showed up. This is what Iâ€™m talking about when I say there are no limitations, only potential.

I see this, somewhat, from an outsiderâ€™s perspective. I never wanted to live here and resented for years being called an Okie by my friends, while kicking against the goads of my great geographical misfortune. This can happen when you have a single notion of the city, and you can create a narrative that fits that notion if you try hard enough. How many times have you heard your friends complain, â€œThereâ€™s nothing to do here!â€ One night, a couple of years ago, I was trying to decide between going to a burlesque show, an art gallery opening, a friendâ€™s show at The Opolis and a mystery dinner theater engagement. I was finding it impossible to choose, when it struck me, â€œThereâ€™s too much to do here!â€

Beyond finding a community to be involved in and overbooking my social schedule, I began to ease up on my resentment of the city when I actually started walking around in it. I would traipse all around midtown, the Plaza, the Paseo and downtown and slowly, I started falling in love. There is so much beauty here, and itâ€™s never where you expect it to be. This city urges you to go find its treasures, and it is this searching and this journey in finding them that makes the treasures you find so personal and meaningful. If youâ€™re Indiana Jones, hunting down some rare artifact, itâ€™s far less thrilling to find it right there in the open. The adventure is in the search, and Oklahoma City is brimming with rare artifacts. You donâ€™t even need to know where to find them, just set your compass in one direction and start walking.

At okc.net, weâ€™re part of the thronging voices trying to define this place where we live. You should hear our meetings. All of these writers and editors are tripping over themselves with ideas for stories, boiling over with enthusiasm. Our love of the city is so transparent that often we forgot to have a central thesis to what we do. Iâ€™m seeing that, all over this fair land, individuals are rising up and creating and challenging and changing this place. And I know everyone is feeling the same way we do, even if we arenâ€™t all having the same conversation.

Okc.net reflects the search for an identity, because weâ€™re trying to find one too. As the city changes, so do we. We are a protean community of writers, thinkers, artists, comedians, film makers, critics, journalists, musicians, and music lovers. Everyone brings their unique outlook to the table, and finding a way to make it all fit together is like putting together a puzzle where pieces are missing. We want to be all things to all people, but we also know this is impossible.

What we can do, is grow with the city each step of the way. We are finding our voice, our brand, our identity. We are holding fast to the idea that Oklahoma City is a great place to live, full of promise and potential and integrity. We are trying to provide as much entertainment as we provide insight.

You read us because we live here too. We are your neighbors, your friends, co-workers, family, and fellow citizens. We are your community. We like it here.

5 comments to “Everybody Knows, This Is Somewhere.”