May Day: A Radical Strike into the Belly of the Beast 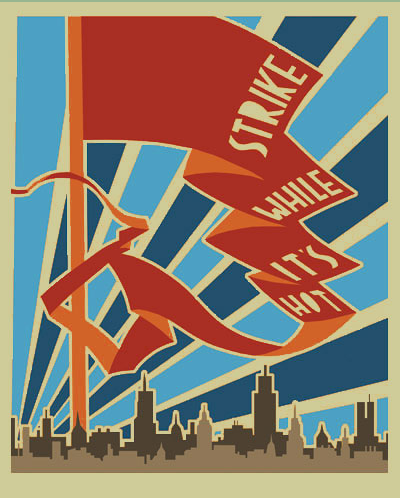 May 1st is recognized worldwide as International Workersâ€™ Day, a holiday originating in response to the Haymarket Massacre of 1886 in Chicago, where workers fought for the establishment of worker protection measures, namely the eight hour workday. However, while the rest of the world marks May Day as a celebration of the working class, the United States is left with Labor Dayâ€”a bankerâ€™s holiday hurriedly passed through Congress by Grover Cleveland in an attempt to appease the outrage generated by the murder of railway workers at the hands of United States Army troops during the Pullman Strike.

May Day, along with notions of radical worker action, has largely been ignored in the United States in recent years. But the time for complacency has passed.

While a worker walk-out may have been born from the secessio plebis of Ancient Rome, English Chartist and radical preacher William Benbow brought to modern times the idea of general strike as a â€œsacred monthâ€ in the first mass working-class labor movement.Â  In 1877, the Great Railroad Strike began the first major labor action in the United States; centered in East Saint Louis, the strike shut down all industrial railway traffic through the National Stockyards, letting only passenger and mail trains through. In 1936, early in Franklin D. Rooseveltâ€™s presidency, a series of strikes spread; half a million textile workers united in states across the country, dock workers and their associates in San Francisco, and radical Teamsters in Minneapolis all fought against the violence of police and armed strikebreakers. These strikes, and the unemployment councils that cropped up to encourage progressive change, pushed Roosevelt to enact bold reforms to the American system.

Over the course of two days in December of 1946, radical action brought City of Oakland to a standstill. The general strike there inspired the anti-labor Taft-Hartley Act that President Truman called a â€œconflict with important principles of our democratic society,â€ even as he used it twelve times over the course of his presidency. The act essentially killed the general strike as a tactic for the labor movement.

The power of the working class, however, is not tied to mainstream organized labor; concessions by the AFL-CIO to the governmentâ€™s National Labor Relations Board have made the organization little more than a special interest group for the Democrats, even as they pass anti-labor and anti-free speech legislation. While the working class needs the strength of militant unionizationâ€”the IWW Food and Retail Workers United union in the Pacific Northwest being a good exampleâ€”the policies of the National Labor Relations Board are decidedly anti-worker. Capitulation of reactionary unions to NLRB demands, and to the Democratic Party, constitutes abandonment of the working class.

Knowing that union leadership would be refused the blessing of their Democratic Party masters, rank-and-file members of labor joined with the Occupy Movement to speak for themselves; in October 2011, the General Assembly of Occupy Oakland voted overwhelmingly to shut down the city on November 2nd in response to the military-style crackdown on demonstrators by eighteen different police agencies, including the critical wounding of Scott Olsen and Kayvan Sabehgi, two veterans of the war in Iraq. The convergence of radical labor and Occupy Oakland made it possible to shut down the Port of Oakland, the fifth-largest container port in the nation, disrupting millions of dollars of capitalist income. This is only the beginning.

“Do not wait to strike till the iron is hot; but make it hot by striking!” -William Butler Yeats

In December of 2011, Occupy Los Angeles called for a general strike on May Day, to â€œrecognize housing, education, and healthcare as human rights.â€ This revival of May Day has been echoed by Occupations from wealthy Wall Street to poverty-stricken Oklahoma. Already, nationwide strikes have rocked other countries hit hard by the capitalist crisis, including Spain, Iceland, Portugal, and Greece. Austerity measures in these countries have been enacted solely to appease unelected European Union technocrats, protecting the interests of wealthy investors and multinational banking cartels. The civil war that capitalism calls â€œpeace” is intensifying universally; the May Day General Strike will be our response to their crisis.

On May 1st, 2012, we will revive the May Day the ruling class has tried to erase; we will celebrate International Workersâ€™ Day in the United States as a political manifestation of class consciousness and international solidarity.

However, our demonstrations on May Day cannot be an exercise in paying homage to the past days of the global justice movement; instead, they must embody concrete preparation for the future. The anarchist concept of prefigurative politics demands that we lay the foundations of future society solidly in the present. By retaking May Day, we stand in solidarity with a legacy of international struggle against neoliberal capitalism and authoritarian control. Values such as classlessness, autonomy, self-management, diversity, and mutual aid preclude borders; the internationalism of May Day is only one step in a long march towards an international solidarity.

The atmosphere across the globe seems pregnant with a revolutionary fervor unseen in recent years. The occupation at New York Cityâ€™s New School in 2008 provided a glimpse into the possibilities of occupation when students seized their school building as a show of solidarity against the policies of a broken administration. The nascent student movement later reclaimed campuses across California, inspiring actions nationwide with the release of an influential text called â€œCommuniquÃ© from an Absent Future.â€ At the same time, organizers linked themselves to demonstrations in Greece over the police murder of a 15-year old anarchist in the neighborhood of Exarcheia.

With the European crisis beginning in late 2010 and Arab Spring blossoming in early 2011, international resistance to gutter government became not only widespread, but populist in nature. In Greece, the â€œI Wonâ€™t Payâ€ movement took shape as normal citizens ignored tolls, transit ticket costs, and bills for healthcare. Governor Scott Walkerâ€™s anti-labor actions designed to eliminate collective bargaining were met with thousands of people descending on the Madison, Wisconsin State Capitol. Later that spring, the May 15th movement known as los Indignados took over public squares in Spain and Greece and demanded a radical change to the political milieu.

Millions of people around the world are waking up to the realization that capitalism is a pyramid scheme.

Our unity with the workers of the world extends beyond May Day. Radical movements must seek more than an end to illegitimate and authoritarian governments; we demand the recognition of universal rights, respect of individual autonomy and local decision-making, and an end to coercive and subordinate relationships in all areas of our lives. As Bob Black writes in The Abolition of Work:

“To demonize state authoritarianism while ignoring identical, albeit contract-consecrated, subservient arrangements in the large-scale corporations which control the world economy is fetishism at its worst … Your supervisor gives you more or-else orders in a week than the police do in a decade.”

Our struggle has to be more than mere conflict with a rigged economic system. Economics do not exist in a vacuum, but at the convergence of complex political, financial, and military interests. Historical, social, and legal dimensions come into play with the understanding that markets perpetrate inequities by favoring those with more power, wealth, and privilege. To avoid essentialism, we must strike hard at the intersections that prop up systemic inequality, even as we focus on unbridled market fundamentalism itself.

One of the most dangerous institutions that undergird capitalist economic structure is the military-industrial complex.

On May 20-21st, tens of thousands will gather in Chicago to demonstrate against the NATO military bloc. Serving as the armed will of the U.S. and Western Europe, NATO accounts for a staggering 70% of the worldâ€™s military spending, money that is used to control strategic resources of the Global South on behalf of a Western capitalist economic minority. While the majority of the planet lives on less than $2 per day, NATO swallows $2 billion per week on a war that nobody seems to want. The reasons are simple: poverty and wealth are functions of politico-economic entanglement; when resources abroad like oil or precious metals are determined to be matters of national security, the politics of who deserves what comes into play.

Contrast the billions spent by countries on weapons and war technology and the amount of money spent on help for the poverty-stricken children, women and men of the Global South. A stark picture is soon painted.

As spokesman for the Coalition Against NATO/G-8 War & Poverty Agenda, Andy Thayer reminds us that Richard Nixon, President of the US in â€˜68, was no friend of the working class. However, even despite being â€œideologically … further to the right of any previous post-WW II president, and a notorious racist and anti-Semite to boot,â€ Nixon enacted a series of measures â€œthat marked him as by far the most â€œprogressiveâ€ president since the Great Depressionâ€”far to the left of, yes, President Obama.â€ Despite his conservative principles, a mass movement of citizen agitation forced Nixon to enact Affirmative Action, the Environmental Protection Agency, the Occupational Safety and Health Administration (OSHA), expand food stamps, nominate a Supreme Court that gave us Roe v. Wade, and finally, a wind-down of the Vietnam War.

Young men and women who join the military, many for an education or a job opportunity, are being slaughtered around the world as the American Empire advances, using poor countries as proxy in many cases. As many soldiers refuse to reenlist, the temptation of tactical nuclear strike grows for the Pentagon. Without an immediate demand for disarmament, a global nuclear war is almost certainly on the horizon; already, we see the case built for attacks on Iran and North Korea. Thayerâ€™s call for continuous and forceful action against warmongering is an urgent one; the opportunity to act against imperial militarism must be seized in Chicago as Obama takes the stage in his effort make the NATO summit the centerpiece of his reelection campaign.

Chicago 1968 marked the beginning of the end for the Vietnam War. Exposing NATOâ€™s military expansionist policies in Chicago 2012 may provide a valuable victory for Occupy Wall Street and for the global justice movement as a whole. War must be understood as a critical underpinning of the capitalist agenda.

The call for a general strike and the mobilization of opposition to NATOâ€™s military stranglehold, however, must only be the beginning of a growing and sustained process of radical organization: of fellow citizens in the workplace, in our neighborhoods, and in our schools. Our movement must include the homeless, the working poor, the uneducated, the societal marginalizedâ€”those most disadvantaged by capitalist exploitation. Radical mo(ve)ments such as these serve as a wake-up call, not only to socio-political elites faced with a critical mass demanding change, but to the entirety of the working class who have realized the power they seek lies in their own direct action. Profound social transformation must be at the root of any economic recovery.

We live in a time when half-hearted notions of â€œreformâ€ are served only as a recuperative mechanism for capitalist greed, where governments pledge that the only escape from financial crisis must come through workers surrendering their rights, where the commons is privatized and the rights of all are turned into a bargaining chip that benefits only a few. Womenâ€™s bodies are turned into battlegrounds as politicians fight for office. Social services, education, and jobs are being slashed in a scorched-earth campaign to preserve power.

Historically, government has failed in its responsibilities, unless forced by direct action: sit-ins and Freedom Rides for the rights of black people, strikes and boycotts for the rights of workers, mutinies and desertions of soldiers in order to stop a war. Today, we can be sure we will not see any change from the status quo … unless popular upsurge demands it. The best way to make our demands known? Hit capitalism in its pocketbook.

Iâ€™ll meet you at the barricades.

Find more about the Central Oklahoma Black/Red Alliance at www.facebook.com/COBRACollective

This article has been republished by PressAction.com, Infoshop.org, Anarkismo.net, and syndicated on the Indymedia newswire.