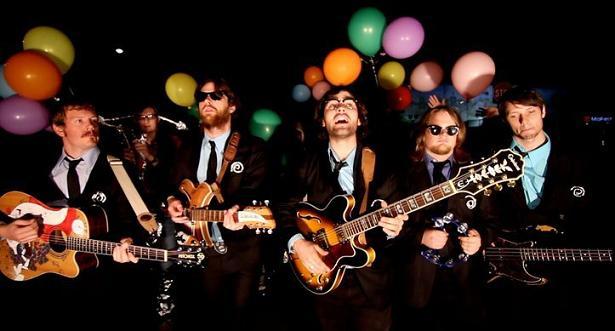 (no bird puns contained within)

Weather reports indicate itâ€™s going to be a warm day today, and weâ€™re hoping it stays that way, because The Wurly Birds are definitely warm weather music. [Which makes it pretty apropos that theyâ€™re playing the Opolis outdoor stage (7:30 pm, April 29th).] Blended harmonies, pop chords and an assortment of instruments from tubas to kazoos lend The Wurly Birds their special, retro, psychedelic rock sound. This hard working band has been busy the past year, cutting a new EP (which will be available for purchase at NMF), shooting music videos, playing gigs and getting down to a sound that is a welcome departure from the lint-collecting, navel-gazing music that sprawls sleepily across the indie scene right now.

â€œI’d say we’re a random collective of fellows who share a common ear for old soul and British invasion. Our independent sounds–psychedelic, alt-country, jazz, and garage rock– serve to keep things interesting. You know, tension, which just adds to the energy.â€

Those influences radiate through their music â€“ and retro influences mean a thread of familiar warmth easily weaves its way into their sound. Listening to The Wurly Birds is like driving around in the back of your parents station wagon as a kid, windows down, radio all tuned to the Oldies station, parents in the front seat humming off-key to a Beach Boys song. That California harmony seeps its way into their music, but other influences are present, like Dr. Dog, The Byrds, Van Morrison, The Kinks, The Animals, and The Cyrkle. â€œPeople hear the Beatles.â€ Lester continued, â€œAs flattering as that is, we’d encourage you to listen a little deeper. We’re all over the place, really, and that’s just where we want to be.â€

The band has big plans for their NMF performance, promising â€œa lot of tambourinesâ€ and a guest appearance by Pilar of The Electric Primadonnas on the keyboard for at least half of their set. When asked what fans should expect at the show, Lester responded, â€œExpect tears of joy, and an overwhelming sense of euphoria. Expect sweaty horns and people fainting in the front row.â€

The Wurly Birds have an incredibly energetic video in the NMF Music Video competition for their new single, â€œAll Right Here.â€ Click on the link below to watch. Youâ€™ll feel like you spent a day at the circus, without ever leaving that custom made you-shaped indention on the couch.

One of the things about music festivals is youâ€™re always missing one band in order to see another play. Then your friends, who inevitably went to see the other band, rub it in later. â€œOh man, I canâ€™t believe you missed the show! It was the most outrageous live performance of ALL TIME! The sky opened up and rained down Hershey kisses on everyone!â€ (the re-telling gets more hyperbolic the more upset you are that you missed the show). In order to retain bragging rights, and a sense of pride, donâ€™t miss The Pretty Black Chains much anticipated Norman Music Festival performance.

This band is playing real rock â€™nâ€™ roll at a time when the audio landscape is riding futuristic sonic waves to a territory run mostly by computers and sweaty-palmed Youtube overlords. Crystal Castles, MGMT, Girl Talk, and El Guincho might make you want to dance your ecstasied ass off, but thereâ€™s not a lot of, um, real music to be found in the mix. If you want to cut loose and indulge in the soporific, dirty, Led Zeppelin-era stylings of the 70s, Pretty Black Chains is your band. Weâ€™re talking big guitar riffs, epic solos, frenetic drumming, all fronted by a leading man whoâ€™s as engaging to watch live as he is a talented vocalist.

Deerpeople (not to be confused with Deer Tick, Deerhunter or Deerhoof) is a Stillwater band that sounds like theyâ€™re creating powerful indie dance rhythms from another dimension. With mad tempo changes, incandescent violin riffs, driven vocals, killer lyrics (â€œMotherfucker, I set my body on fire todayâ€), and a show that is more performance art than rock concert, you can bet that Deerpeople are going to tear it up at the Norman Music Festival.

Deerpeopleâ€™s music builds to a frantic tempo, with violin harmonies and â€œwhooo-ooo-ooosâ€ and double kick drumlines crashing against your eardrums. Even if youâ€™re the stoic type, or youâ€™ve got the music festival blues (born of frustrations like losing your friend in the crowd and they wonâ€™t answer their phones, and itâ€™s muggy, and the crowds meander in your path, and the security guards outside The Sooner Theater harshly herd and harass you like mindless cattle, and youâ€™ve gotta pay five goddamn dollars for a bottle of water), you will wind up losing your mind at the crescendo. Give up and just start dancing. This is shoulder-shaking, hip-bopping music, and everyone around you is going nuts too, so donâ€™t be self-conscious.

Beyond the hyper wall of sound, people flock to Deerpeople shows for the theatrical spectacle. At their SXSW showcase, astonished passers-by remarked, â€œThatâ€™s what Oklahoma is doing now?â€ Weâ€™ve moved beyond Wayne Coyne in a hamster ball to an even more surreal dreamscape where band members from Deerpeople dress in deer heads and wrestle with a giant octopus and dancers disappear under the veil of black plastic garbage bags to wiggle around and emerge like cicadas from their shell. Who knows what the message is, and who really cares? The point is, this is fantastic, catchy music that engages your senses on every level. Deerpeople put on a tremendous show, and itâ€™s not one to be missed.

Snag their free EP at their bandcamp page (you could also toss a few bucks in the pot for it, because trash bags and costumes arenâ€™t cheap). They are cutting a second EP right now with Trent Bell at Trent Bell Labs, which promises to be even better than the last.