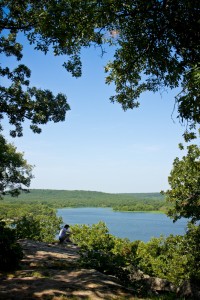 It’s hot right now in Oklahoma, the kind of hot that makes you curse the sky through salty stinging eyelids and clingy jeans. My natural inclination during times like this is to hole up inside my dark living room and catch up on some much needed Mystery Science Theater 3000.

These days however, my attitude’s a little different. Sure there’s plenty of comfort to be found hiding from the sun in a controlled climate, but there’s also a big world out there that needs to be discovered. I can’t let something like a little sweat and a scalding car interior stop me from trying to conquer a small portion of it.
So in the spirit of new experiences, Lacey and I decided to beat the heat at it’s own game and find somewhere reasonably close to the city were we could go swimming without being shooed away by pesky hotel managers.
After a little research and deliberation, we settled on Okmulgee and Dripping Springs State Parks (The name “Dripping Springs” kind of sells itself when you’re talking triple digit heat indexes). The adjacent parks are only about an hour and a half away from OKC, and more importantly, don’t cost a thing to get into. 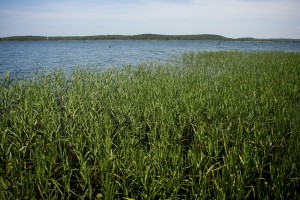 Dripping Spring State Park
The drive out was a blast. We loaded up on iced coffees (our ritualistic road trip drink of choice) and jammed Bathory’s Under the Sign of the Black Mark as we careened through the rolling green hills of eastern Oklahoma.
We arrived at the respective parks in good time, but decided to hold off on the swimming until we had gotten a little exploring under our belts.
After pulling over to check out a few scenic overlooks, we made our way out to Dripping Springs Lake. This lake is actually famous to a lot of Oklahomans as being one of the best bass fishing spots in the whole state. Fishing’s really not my specialty, so I couldn’t really tell you either way, but there were a few people out with fishing poles who seemed to be having a pretty good time.
I was far more interested in the view, which included an array of weathered dead tree tops that stuck out of the lake in an ominous fashion. Perhaps the Bathory had influenced my outlook a little, but I couldn’t help but feel I was witnessing the most metal state park Oklahoma has to offer! Lacey disagreed… 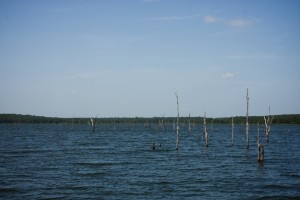 Metal!!!
After checking out Dripping Springs for a bit, we headed toward the spillway dam we had read about while deciding on swimming spots earlier in the day. Built in the 1920s by the WPA, the Okmulgee State Park Spillway is meant to prevent the lake from flooding during Oklahoma’s rainier seasons. Depending on when you visit, the spillway will either be flowing over with water from the lake, or dry like it was when we discovered it. 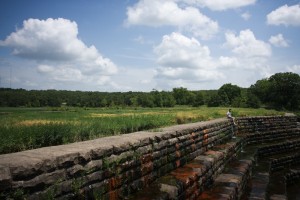 The top of the spillway
We were a little dumbfounded by how huge the spillway was in person. It has an odd ancient mystique, and is quite beautiful even without water cascading over it. Various mosses and other algae-like plants growing over its dripping surface create vivid streaks of green and orange, while the trickles of water that ease its way through the various cracks make the whole thing shimmer brilliantly in the sunlight. 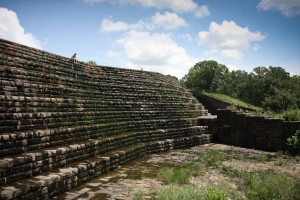 Okmulgee State Park
I climbed to the top (which I’m actually not 100% sure you’re allowed to do) and marveled at the surroundings. 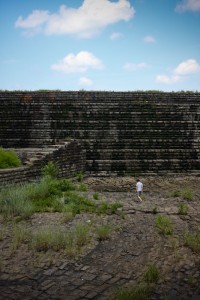 This thing is huge!
Finally, the payoff! After spending a few hours roaming around the park, we finally settled on a great swimming spot at Okmulgee Lake. The water was warm from the summer sun, and we could see turtles peeking their heads above the surface as we lazily floated about. The lake itself was completely surrounded by hills, and made for a great backdrop while seeking refuge from the heat. 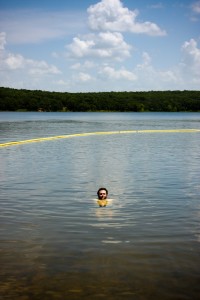 Spiderland?
It wasn’t too long before all we could think about was food. We headed back towards the actual city of Okmulgee after drying off, and settled on the first place we found that had the right amount of charm… 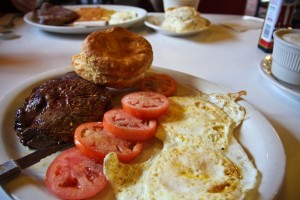 Steak & Eggs, Okmulgee
That place ended up being “Steak & Eggs”, a breakfast-centric diner that seemed to cater to the older locals in Okmulgee. While we are not older, nor locals, its still exactly the kind of place we were looking for. Hearty old fashioned cooking made in a place that has been around quite a few years, and has probably served up plenty of hot coffee to many a trucker-hatted old timer .
We both ordered the titular “steak and eggs breakfast”, and man was it awesome! 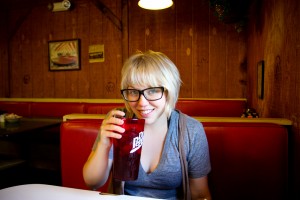 You know you’re in Oklahoma when you’re drinking out of an enormous plastic Dr. Pepper cup
On our way back home we passed a small music shop called ‘Imperial Jewelry and Music’ in Henryetta. As odd as the name is, I probably wouldn’t have thought too much about popping in, except that I saw a billboard a few blocks away advertising the place as an officially licensed Peavey dealer. Now I know Peavey isn’t the first thing most musicians think of when it comes to quality instruments, but I personally have been on a desperate hunt for a Peavey T-40 bass. 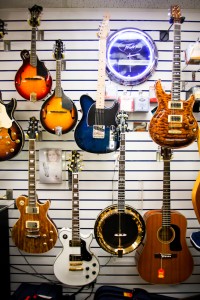 Imperial Jewelry and Music, the official Peavey dealers of Henyretta!
We stopped in just to take a look, and lo and behold, the only used instrument in the store was a beautiful white T-40, and at about half the price that they normally go for! The nice old guy running the shop told me the bass belonged to a country musician who had become a bit of a legend playing local gigs in the area for the last 20 years. He even had a photo of the guy playing the bass framed on the counter… 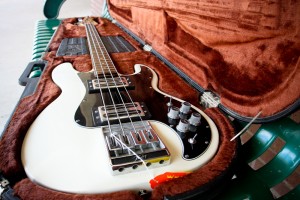 My beautiful T-40 minutes after purchase
So needless to say, the trip was a total success! We got everything we bargained for, and more, and we even made it home in time to catch some MST3K in the air conditioned confines of our home. The T-40 has since been set up masterfully (and afford-ably) by the good folks at Honest Ron’s Guitars in OKC, and plays better than any instrument I’ve ever held.
Lacey has all of her pictures from the trip on the Oklahoma Dispatch’s Flickr.