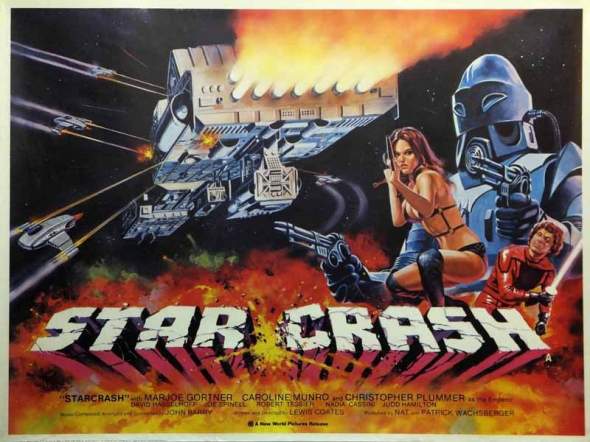 Hosted by Fowler and Patrick Crain, two cinema obsessives whose love of obscure film goes far beyond the realms of the silver screen and into the dumpster behind it, DVâ€™s mission is to bring these classic (and not-so-classic) movies out of obscurity and present them, warts and all, for a public eager for something theyâ€™ve never seen before. DAMAGED Viewing explores a world of wild cinema that only the dark and dirtiest of us even knew existed.

â€œA low, low budgeted film from over 30 years ago, from country not so far, far awayâ€¦â€
For the inaugural DAMAGED Viewing presentation, weâ€™re proud to show the 1979 Spaghetti sci-fi flick STARCRASH! Written and directed by Italian b-movie icon Luigi Cozzi, this STAR WARS-inspired space operaâ€”one of the firstâ€”is, in our opinions, better than anything George Lucas couldâ€™ve dreamed up. Sultry starlet Caroline Munro is intergalactic warrior Stella Star, who, along with her alien sidekick Akton (Marjoe Gortner) and cowboy robot Elle, takes on the evil empire of Count Zarth Arn (Joe Spinell) and rescues the dashing Prince Simon (David Hasselhoff). Itâ€™s sojourn through hyperspace that, in a just, alternate universe, wouldâ€™ve been the biggest movie franchise of all-time!

Like all OKC Film Club events, this is free and open to all.