I know your version of journalism and mine might be different. And in some ways we might overlap. But I think it’s pretty darn hilarious when you’re notified that a Twitter user’s image you’re using actually belongs to a publication. AND you keep leaving it uncredited. Doesn’t do much for your “journalistic” integrity in my eyes.

Here’s the deal. I guess you’re too busy running stories about how women can’t ever get ahead in life. Hmmm. I wonder why? Maybe it might have something to do with the culture at large.

But it’s ok. I mean you’re totally watching dogging issues for women, right? Cause you so support how hard it is walking around out there in the big, bad world with lady parts. Like take for instance, this woman who had to deal with a sick husband and kid yesterday morning before she left to go photograph and write about a protest. Like the woman who ran the non-sick kid to school and back and did some damn errands, edited, published, promoted an article, dealt with some new writers, and managed to produce not one, but two pieces for her publication and work their social media platforms all in one go. I mean, you know the saying, “A gal’s work is never done.”

I would tell you I’m outraged, but that would be a lie. I’m disappointed. Because even when we’re trying to support the rights of women and get others to respect them as equals, we’re still apparently fucking it up as we go along. Hey, “Bro” led publications probably don’t care about the work of other men. Whatever to drive up their traffic and spread their message, right?

I get that Twitter users don’t give flying fucks about crediting photogs and publications. Apparently they think it’s, like, nothing to show up to something and snap a photo. But given the number of shitty photos I see everywhere, it’s real obvious that it’s not just as easy as pointing and shooting on the fly. I guess the years I worked on a photography desk for a paper, all that time I invested in learning the capabilities of my equipment and editing programs (upgrading that shit out of my own pocket), and then this outfit I joined and then became manager of (okc.net) means little. WHATEVER.

Here’s the deal. You could pretend like you give actually give a shit and adequately reflect the work of another woman by giving her and her publication credit, or you can keep on ignoring my requests and that of my co-editor to cite this work. Also, you all make it soooo easy to get in contact with your publications. But hey, if you check your Twitter accounts, I messaged ya there too. So, ball’s in your court.

As for me, I’m going to keep on writing, photographing, and producing content. I won’t be using watermarks since it’s a waste of time – people who want to steal photos for their own use will find ways to crop that shit out or cover it. They’re shitty. Me and about a billion other photogs out there being annoyed won’t change that. What can we do but draw attention to the bullshit as it appears. Although I’m betting some of the more well-established, well-funded photogs probably get extra litigious.

Still, if you persist in participating in this bullshit, don’t expect me to read your articles about equal pay for women and supporting working women, some of them mothers, like I actually believe you care about these issues. Ya say one thing but do another. And as I teach my kids, hypocrites are bad people. People who would want you to treat them a certain way but don’t extend that same expectation to you are hypocrites. Plain and simple. Ergo they’re bad. Like if a guy doesn’t want to be paid less, or go uncredited for his work, or get raped, and demands that not happen, but then goes and does that to others – he’s a bad dude. A hypocrite. A publication that uses women’s issues to sell ads and drive up web traffic for itself and would legally go after people for stealing their work, but then doesn’t extend that same kind of expectation and professional respect to another woman and her publication – yeah, total hypocrites. Like why I am even reading your shit and linking to it. Honestly.

For the record, this photo originally appeared here and was credited to me at the time it was posted. 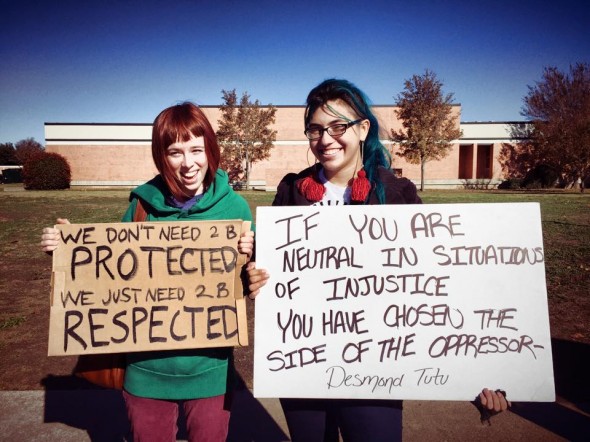 P.S. my friend Alicia and her friend posed for this as I was darting in and out of the crowds. Alicia is another working artist and photographer based in Norman. You can imagine how little we make out here in Oklahoma since people (I guess all over) think it takes like nothing to produce art, words, pictures, all that. Fuck our student loan debt we racked up learning how to do this like the gatekeepers wanted us to, right? ANYWAY, thanks for rocking these signs ladies. And thanks for letting me take your photos.

5 comments to “Dear Jezebel and Cosmopolitan”