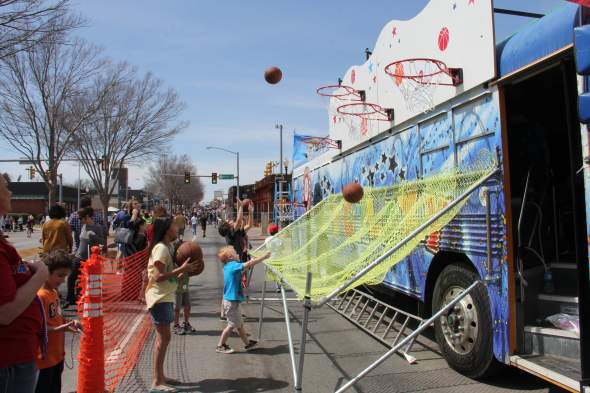 The weather on Sunday was as fair as anyone could hope for in Oklahoma. And on 23rd street, between Robinson and Western, Open Streets OKC held its first event. Given the turn out and the number of people who looked like they were having fun, I’d say it was a success. 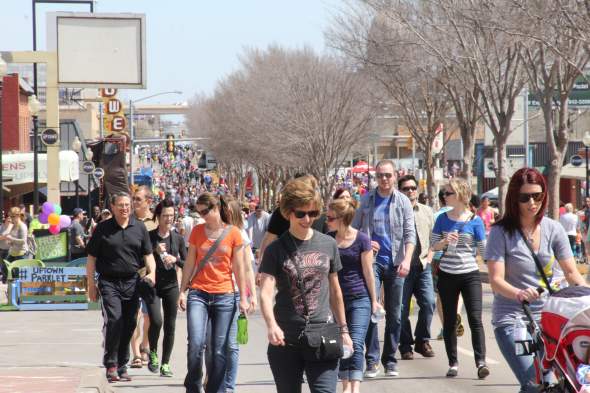 Our office is on 23rd st. But for the first time since I started working at OKC.NET, I can say that walking around the area without having to worry about cars zipping past was a refreshing change of pace. Some of the troubles with crumbling or non-existent sidewalks and poorly-spaced pedestrian crossings were rendered, if only for a few hours, a non-issue. Plus it was heartening to see how many people came to soak up the sunshine and have fun. 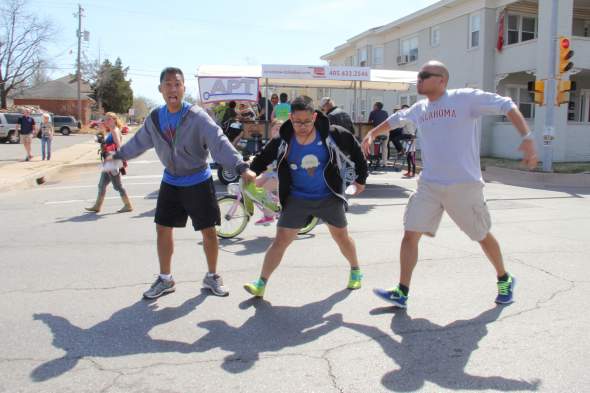 I spotted them doing an impromptu dance in the street before they stopped to move on, not discouraged, I asked them if they’d dance one more time. They were game enough to let me photograph them going through another set of moves.

One of the things I enjoyed most about 23rd on Sunday was the diversity of people out that afternoon. My bias, given I’m a mixed-race woman who has lived all over the world, is that I love seeing mixed groups of people. I’ve lived in places where specter of segregation looms large (Montgomery, Alabama) and I’ve lived in places where the whole population feels like one big melting pot (Oahu, Hawaii). Those are just two examples, but having seen this in multiple places in and outside of the US, I can say that living in and around closed off communities doesn’t seem to make people happy. 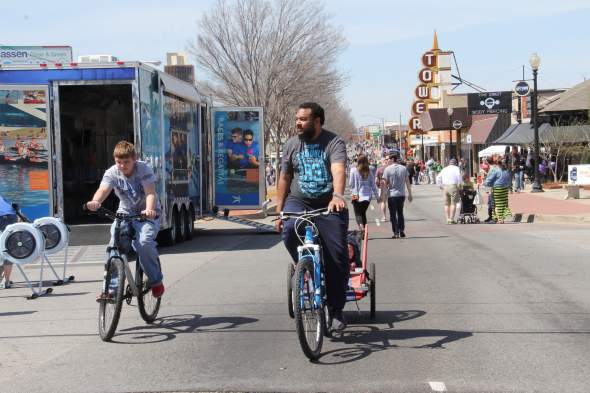 Andrew McIntire and his family biked from Midtown, where he lives, to 23rd St. He said events like Open Streets OKC are important because the neighborhoods in OKC are scattered.

On 23rd street you have State workers at the Capitol, you have businesses, and then you have the surrounding neighborhoods. It is worth noting that this part of the city has a lot of minority groups. Asian-Americans being one such group out and about yesterday, as the Asian District is less than a mile west on 23rd and Classen. 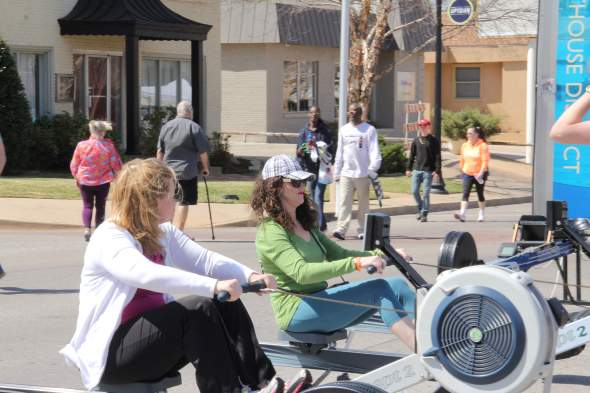 As my children and I waited for ice cream at Roxy’s Ice Cream truck, I got to know the couple standing behind us. The Trans, who are Vietnamese, moved from Ft. Worth, Texas to Oklahoma City. Tiffany Tran, 27, said she hated how much she had to drive to get anywhere in Ft. Worth. Her husband Tam, 30, said they’d been in Oklahoma since last July. They’re still getting to know the area, but an event like Open Streets OKC was exactly what they were hoping to experience in Oklahoma City. I told them April sees a lot more family fun from Festival of the Arts in OKC, another H&8th, monthly art walks in Paeso, Plaza, and Old Film Row, to Norman Music Festival.Â  And if you’re not familiar with those events, now you know! 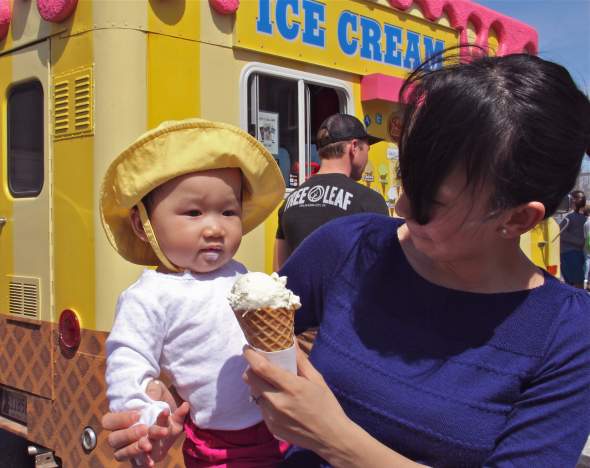 I haven’t heard back on the official crowd size from organizers yet, but sufficed to say, thousands were out circulating through the various activities that ranged from arts and crafts, physical activities, to public safety and health awareness programs. 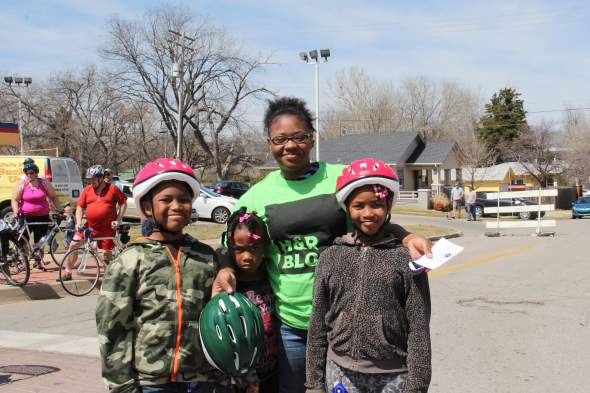 Chere Denmark said Zion Mason, 10, Faith Mason, 6, and Nyrie Mason, 8, all got bike helmets with Safe Kids Oklahoma. The children have skates and bikes at home, but didn’t have helmets, now that they do Denmark said the next items are knee and elbow pads. She also said Faith always looks that serious.

I also saw the Curbside Chronicle Â out and about that day too. For those not familiar, this glossy magazine, that you can pick up for $2 an issue, is a work program aimed at empowering homeless and low income individuals. We’ll have more on them in the future, but I thought it was interesting to see their representatives interacting with the general public, because no matter what you think of homelessness, there were visibly homeless and low income people out enjoying the day with those who are better off economically. When we talk about community building, we need to remember events like these bring back the kinds of varied public interactions we don’t get when we’re shuttling between work, home, and errands. 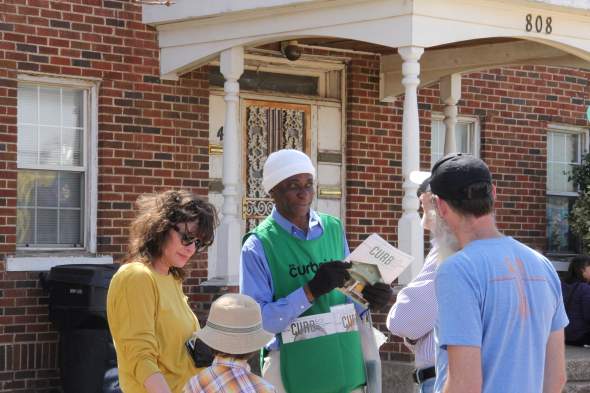 Curbside Chronicle being explained to those interested in it.

There were also a lot of “envisioning” projects at various locations in addition to information about future fundraising and community events. One such upcoming event will be the Uncorked event at the Gold Dome on April 17th. 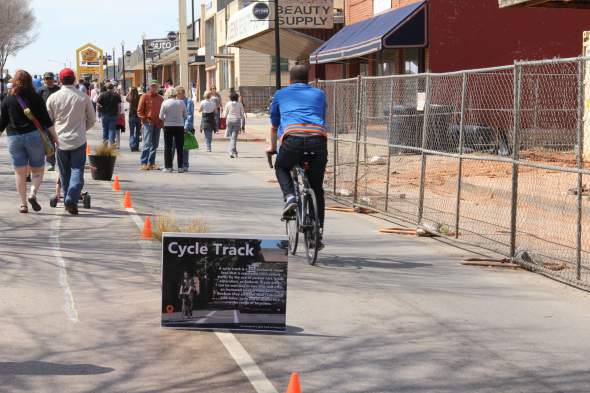 Can you imagine bike lanes on 23rd?

We have more pictures available on Flickr and we’ll be keeping tabs on future Open Streets OKC events.Â  Until then, keep your eyes on social media. At an evaluation tent, it was clear the majority of people heard about the Open Streets from social media. Also I noticed that many drove to get there. You can follow us on Facebook here (365 OKC), here (OKC.NET – where we keep it weirder than the other pages), and here (365 Norman). We do a tweet here and there on Twitter: okcdotnet.

Lastly, while it is not confirmed with an official date as of yet, Justin Price, owner of Pizza 23, says he is planning a monthly street/patio party to take place starting in April. Ideally he will have 3 food trucks parked in front of Pizza 23, live music on the patio, and a whole lot of fun. Our building, as we are upstairs neighbors, has parking in the back. It’s good to know that as a restaurant owner, Price is not intimidated by food trucks operating near his business and that he actually welcomes them to his location. There is value in fostering community. 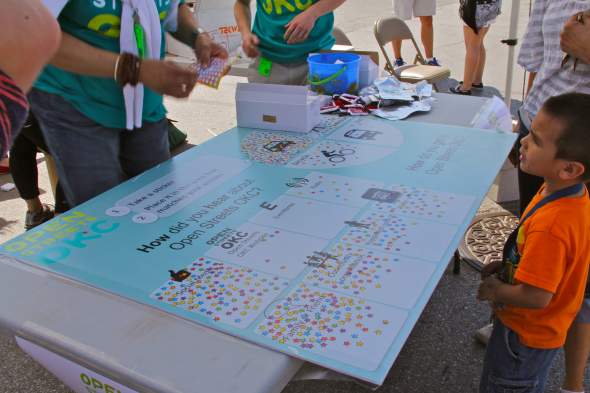