This is my cat, Mr. Breakfast. He is telegenic, he has experience as a leader, he had a hardscrabble upbringing – stray adopted from my wife’s old apartment complex – he knows what it’s like to live in this city without a car, he hasn’t said what he would do as Mayor.Â  He is as qualified as anyone on the ballot in this mayoral race. 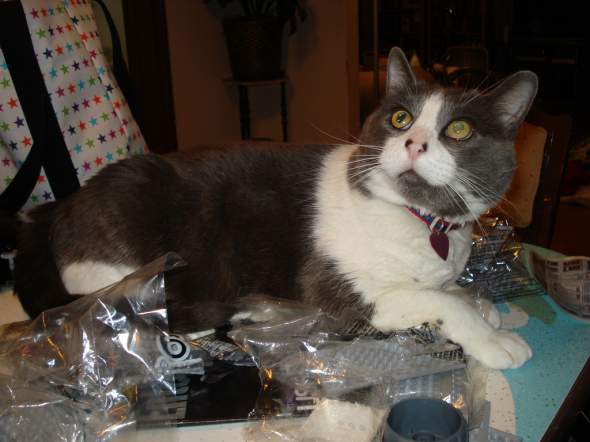 Who should you vote for tomorrow? I have no idea, and neither do you.

Despite round after round of headache-inducing invective, despite piles of junk mail from the campaigns and propaganda sheets from the Chamber of Commerce, neither side has told me the only thing that I actually want to know:

“If elected, what do you plan to do?”

Arguing about things that happened several years ago doesn’t interest me. It holds my attention about as well as a flame war on Facebook, which is to say, not at all. There have been no real debates, no real reporting (reprinting press releases on a blog or digging through people’s divorce papers is not reporting) and precious little of substance.

I voted for Mick last time, and I think he has done a decent job, but I’m big on transparency. I understand that from a strategic standpoint the mayor has an incumbent advantage and he is simply trying to run down the clock. If I ran his campaign, I would tell him to do the same thing.

As a voter, that doesn’t work for me.

For all of his lack of specifics,Â  Shadid has brought up plenty of serious questions about the leadership of this city, and he has shown up publicly to talk about them. Mick Cornett has a broadcasting background, and I sometimes get a “edited for broadcast” feel for his public statements. I want to hear him off the cuff, and I want him to say what he sees happening in the next few years in this city and what he wants to do about it. As mushy as the numbers are in some ways, there HAS been a strange spike in crime over the last few years. We should probably look into that.

I don’t think more Showcase Projects will solve that problem. Detroit is a “Big League City” too. So is St. Louis. If being “Big League” means getting mugged, I would be happy to move to Wichita. They have some nice stuff too, and I can still watch the Thunder on cable.

“Nice things are nice to have.”

That’s the entire message of the Cornett campaign. Again, as a voter, that doesn’t work for me.

I campaigned for Ed Shadid when he ran for City Council, I supported his candidacy for Mayor before he had officially announced it, because I want someone as Mayor who will stand up for the progressive values that I hold. I haven’t heard much about that in this campaign, probably because a solid segment of the anti-Cornett block are anti-tax Republicans.

What, specifically, does being “for the neighborhoods” mean in practice? How many cops do you want to hire, and how will you pay them? The south side is growing rapidly, what will you do for the people there? These are the sort of issues that should have been front and center from day one, not the constant rehash of issues from several years ago that we have seen. It also bothers me that my research into the question of public safety has shown this central issue of his campaign to be more ambiguous than I suspected.

The recent fracas with the anti-gay mailer that the Shadid campaign apparently sent out strikes me as a mostly non-issue. Given that I received no fewer than 3 proofs for my last box of 5oo business cards, it does seem like a striking omission, but I definitely don’t think that Ed Shadid is a bigot. This sort of thing does happen; just ask my matching set of 1″x .5″ OKC.NET stickers that were supposed to be 2″x 1″.

I just hope that the Shadid campaign didn’t pay anything for those mailers, and if they did, I hope they sue them to get it back.

I will vote, because I believe in civic duty, but I won’t love doing it.