Halloween is a ripe time for performance artists to leave their audiences spellbound with all manner of tricks stuffed down their dripping with glitz costumes. And it was at AdÃ¨le Wolf’s Burlesque & Variety Show – Halloween Spectacular, in the Oklahoma Contemporary Arts Center this past Saturday, that a circle of local and national performers worked their sexy hocus pocus.

Adele Wolf, high priestess of her own burlesque and variety show as well as the Oklahoma City Burlesque Festival, greeted us onlookers in a mere silk robe. She flirted and wise cracked with the audience. And she amazed me greatly with my new favorite number of hers. She came in perched upon a bench held up by two shirtless servant boys. She was adorned as an uncanny Cleopatra with liquid gold Isis wings accompanied by a handcrafted capped headdress.

Our next performer put a little spin on the variety part of the show. Sonya Barrett, singer/songwriter from OKC, fluttered onstage as a cobalt witch crooning, “I Put a Spell on You,” which I had learned Screamin’ Jay Hawkins was the original writer of the song from one of the trivia questions being asked between each number. And then Miss Barrett heightened my admiration coming out as Rosie the Riveter singing a sweet version of “No Diggity” with her second song that left me saying “Encore!”

Before the burlesque can begin, there was a slight pause for a relay race that consisted of just buckets, candy corn, and teeth. Two volunteers, a strapping fireman and his saucy devil date, raced back and forth filling their containers. The girl won, of course.

The first lady of striptease was Tana the Tattooed Lady from Portland, OR, she won the Satan’s Angel Award and the Miss Tiki Oasis title this year. During her routine, she stumbles onstage in a dress suit and teal hair looking very bewildered. She wanders around trying to snap photos of floating Caspers running around the stage with her Polaroid camera. “DAY-O!” stops her in her tracks. Her body as if possessed begins to bump and grind. As her clothes are split open and thrown onto the floor she takes on an energetic grace. The music transitions into “Jump in the Line” and I begin to see the masterpieces she has inked into her skin. The tattooed lady is a right and damn good one. Her second routine brought out the gift of song as paired with her monochrome jail jumpsuit. Ermergerd. I think I might take a vacation to the Northwest to see what else she’s got up her sleeve.

We were then treated to the always enchanting sensuality of the belly dance. The bronzed bodacious babe, Lamees Amar, hypnotized me with glittery ornaments and undulating hips. But what is better than one belly dancer? Two belly dancers in united sways! Ayperi Al Jawahir joined Amar in a fiery duet. It inspired me to learn a thing or two.

I was thrilled to hear that a born and bred circus performer was breathing the same air as me. Not to mention she was part of Glee in a Superbowl commercial doing aerial silks and opened for one of Oklahoma’s favorites Willie Nelson. Mariel a la Mode from St.Louis, MO strolled out with a fluffy darling cupcake cushion in a blush pink costume. She sang out about honey buns and her cream pie! Her second act included a static trapeze and she was suited in a leotard that seemed to be made out of iridescent gold flambe. I have never seen such formation of a body slipping and hoisting about on this circus swing. My eyes popped when she hung there just by her Achilles tendons. The Reynolds Family must be quite proud.

Then there was also a set from sassy Jeez Loueez, aka the Shimmy Showdown Champion of 2013 and Miss Viva Las Vegas of 2012, from St.Louis, MO. My first impression of this beautiful woman was watching her dance like an eloquent midnight blue mamba in a ball gown that quickly turned into a firecracker with fringe. I understand now why she is the shimmy champion. Give me chicka-boom then sis-boom-bah. When she came back out, she was none other than that cocky kid Roofio from the movie Hook. YES! She had the ‘come at me, brah’ attitude as set to Michael Jackson’s “Bad.” I don’t think I needed much convincing she was badass after that. All shows must ultimately come to an end. I was very excited to see these performances and now I, as a rookie Burlesque dancer, need to hunker down and up the anty in my costume closet. If you need to be inspired, keep a look out for AdÃ¨le Wolf’s Burlesque & Variety Show on New Years Eve to experience the voodoo as they do. It’ll be a great show. 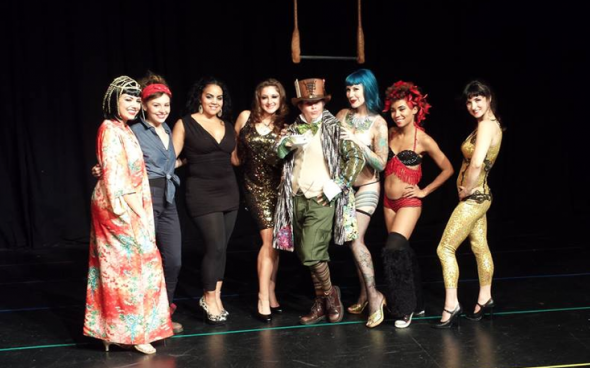