The Paramount continues to be a unique and rich haven for local arts happenings. Last night I walked in thinking I was on time for Mickey Reeceâ€™s â€œQueerbaitâ€ film premier. There was still a movie playing inside, with a piano accompaniment, to a full house. In the coffee shop there were teams of people, one of them, asked pointed questions about the improv comedy in â€œQueerbaitâ€ with the cast after the film. This is to say they held court to two different sold out movies and managed to run a business next door.

So it should come as no surprise that tonight The Paramount will hold an impromptu reunion (with soul food dinner included!) of old friends, headlined by one of OKCâ€™s singer songwriter treasures, and a woman who left our state in 1981 for San Francisco,Â California. Paula â€œTuffyâ€ Eldridge anchors a bill that includes the elegantly great Mary Reynolds, Â stalwart guitar maestro Peggy Johnson, Rebecca J. Brock, newcomer JL Jones and Ivan Thompson. She will be reunited with various members from the different incarnations of her bands, True Star and The Tuffy Band.

Eldridgeâ€™s style blends deep-from-the-diaphragm vocals (sheâ€™s active in her local church choir) with the introspective stringy lyricism of the Joni Mitchell heyday. Growing up in Muskogee, Oklahoma she set out for a diverse record collection. â€œBeing a black person, I was so eclectic people never knew what to do with me,â€ she says. Perhaps they may not have expected her to be absorbing all the Steely Dan, Led Zeppelin and Willie, Waylon and the Boys. But as the line-up shows she fit into the folk milieu fine here.

Like Mary Reynolds, whose latest CD Nightingale is a find, Tuffy has a background in jazz standards. Hers goes back to her childhood in Harlem (149th between Lennox and Eighth in a home called The Dunbar which once housed novelist James Baldwin). Tuffyâ€™s mother took her to museums and concerts that exposed her to a world of great jazz. Seeing Benny Goodman live was an experience she never forgot.

Moving to Muskogee was different, but overall enriching for Eldridgeâ€™s imagination, she said. Her story runs contrary to a modern notion today that the small town is a place to leave for the urban metropolis. At school she was active in a big band and some musical theater. Other than navigating some regional differences in accents, Tuffy had a more positive outlook on Muskogee seeing as she’d been mugged more than once in Harlem.

â€œI thought (Muskogee) was an awesome thing,â€ Eldridge says. â€œTo have the freedom of being in a place like that was astounding. You could ride your bike wherever you want. They had some of the best music programs in the state. I played flute guitar in stage bands.â€

The only hang up was something she could get over.

â€œI spent the first couple years in Muskogee trying to find egg and onion mazza. Much to my chagrin there wasnâ€™t any in Muskogee.â€

In Oklahoma Eldridge was a regular at what was then known as (Bill Faulkâ€™s) Paseo Junction. Sipango was a music spot, as was VZDs and Chadwicks. The KATT had a local music showcase, called â€œHomegrown.â€ The program’s host would support Tuffy here, and then later in Calfornia, booking her a gig at the Fillmore West once. However after having enough of playing in bars where people came to talk, Eldridge left to try that other city. She told The Oklahoman upon leaving that she had seen people talk over Joni Mitchell and Emmylou Harris here and that was it.

Today OKC has a strong and earnest media campaign in favor of the arts, but Iâ€™ll leave it up to the reader to judge whether itâ€™s become more nurturing for this kind of thing than it was in Tuffyâ€™s day.

Eldridgeâ€™s homecoming will be warm though Iâ€™m sure. She will also be joined by fellow musicians who await her arrival: James Coffey, Jerry Griffen, Robert Follsom, Rickey Hutchison, and Elyse Angelo.

Tickets are $20 online and $25 at the door. A Soul Food dinner is included. 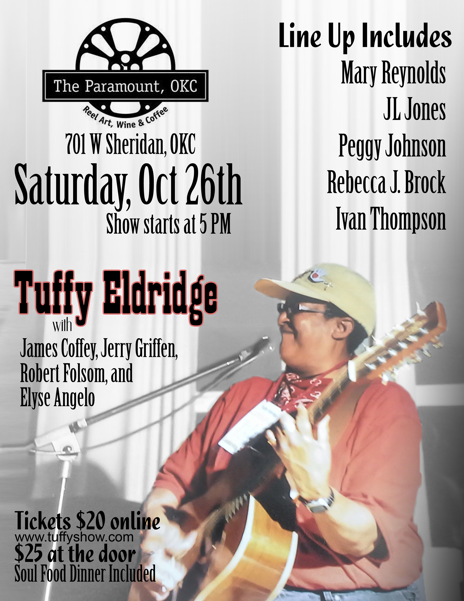