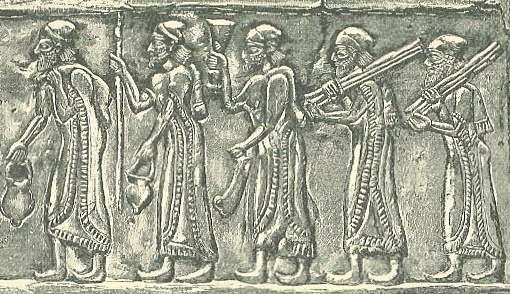 Detail of Israelites from a Roman obelisk

They are most likely members of the Israelite Church of God In Christ here in Oklahoma City, or at a branch located in Chickasha. The ICGJC is one of hundreds of “Black Hebrew” groups tracing their history back to the early 1900s. Their message is that Black people (the “pure race”) and those of Latin American and Native American descent are actually the real Israelites who fled from the rule of the Persian King Cyrus. (This of course can be seen as dismissive if not insulting to Native American tribes who have their own very personal sense of history and spiritual beliefs.) Those of Jewish decent are white imposters. White people are basically what youâ€™d expect given the scenario. Not good. All of this “pure race” talk caught the attention of the Southern Poverty Law Center, who have included them in their comprehensive list of American hate groups.

In the last four to five months, this group has held at least 3 rallies within the inner northwest side of Oklahoma City. So far, these rallies have taken form as gatherings of 10-30 African-American men young and old (some appearing as young as 14-16). The group uses the tactic of keeping to the median or sidewalk areas in front of a 7-11 or other local convenience store. This strategy leaves the clerks with little choice but to carry on as usual until the situation becomes unsettling enough to call the police. I have on one occasion witnessed the arrest of at least one ICGJC member for unknown reasons while driving through the intersection of NW 23rd and Pennsylvania Ave.

The first time I saw the ICGJC was on the corner of NW 10th and Western Ave. Before this I was completely unaware of the groupâ€™s existence. They seemed at first glance to be dressed as KKK members, wearing white robes but with black caps and the Star of David. My attention was initially drawn to them because they were exchanging words with a group of people across the street. The group across the street was yelling that they were â€œUncle Tomsâ€ and the ICGJC members were aggressively yelling back, but I couldnâ€™t make out what was being said. Their sign was also illegible from my perspective. My curiosity was piqued and I looked them up based on their outfits.

A quick Google search found a post from LukesCorner.net, an Oklahoma City blogger, who recalled a Christmas encounter with the Oklahoma City chapter of ICGJC in which their signs read the following:

The IGCJC is the second largest Black Hebrew Israelite organization in the United States after the Nation of Yahweh, and claim a following over a hundred thousand strong. They follow 1800â€™s Pentecostal interpretations of the Old Testament in which those with black skin are the true Israelites, having fled the rule of the Persian King Cyrus.

A representative sample of their literature makes their point clear:

“ARE THE SO-CALLED NEGROES IN AMERICA AFRICANS? NO! THEY ARE THE REAL HEBREW ISRAELITES (JEWS).
Read: Exo: 11:7 “… That ye may know that the Lord doth put a difference between the Egyptians and Israel.” THE REAL JEWS ARE BLACK (referring to people of brown color) ACCORDING TO THE BIBLE. Read: Jer. 14:2- “Judah mourneth (in sorrow) an the leaders) thereof languish (grow weaker), they are Black unto the ground (meaning different shades of brown)…”

Want scriptural support? They site :2 Esdras as well as Deuteronomy 33:17, which states:

From this dense passage and others from non-canonical christian writings, the ICGJC somehow gather that the dark-skinned are the true children of Israel.

They also site The Song of Solomon, which supposedly consists of letters between King Solomon and his lover, the daughter of the Pharaoh. The passage in question is:

â€œI am black, but comely, O ye daughters of Jerusalem, as the tents of Kedar, as the curtains of Solomon. Look not upon me, because I am black, because the sun hath looked upon me: my motherâ€™s children were angry with me; they made me the keeper of the vineyards; but mine own vineyard have I not kept.â€

Most biblical scholars think the author of this passage isn’t Solomon, but his lover- who very well may have been black. That interpretation does little to sway the ICGJC.

Their leader, Tazadaqyah, is known as â€œThe Comforterâ€. His followers believe he is the human incarnation of the â€œholy ghost.â€ Tazadaqyah has made many television appearances, including an episode of Jerry Springer in which he and his followers faced off against the KKK in a racism-fueled slap fight for the ages.

Tazadaqyah formed the ICGJC somewhere around the year 2000 from what remained of a former Black Hebrew organization known as the Israelite School of Universal Practical Knowledge (ISUPK), after their leader made Apocalyptic prophecies about the coming year 200o. As often happens when the world fails to end on schedule, the group fractured, with a faction following Tazadqyah, who claimed the angel Gabriel had come to him on top of Mt. Sinai bestowing him with the Holy Spirit to spread Godâ€™s message on earth.

A quick tour around www.saintsunit.org, a prominent ICGJC reference website, can lead to some odd places, including links to blog articles on topics as disparate as the â€œWar on Christmasâ€ and the truth about UFOs (which are â€œangels of God, not little space menâ€). Any semblance of economic and political rationale soon breaks down against the power of their true message; spreading Tazadaquahâ€™s gospel of a vast conspiracy of lost and suppressed histories. Real world issues such as economic or judicial injustice are simply recruiting tools for an eventual indoctrination into the world of ICGJC beliefs.

So far none of this really seems all that hateful. So they think they’re the true Jews; so what? Itâ€™s really within the flyers, radio show transcripts and blog entries that you start to trip over hate speech. Being the chosen people of God is an exclusive gig, and they have no intention of sharing the duties. The Jewish people are referred to as â€œimpostersâ€ who hide the truth of the Christian Apocrypha. Anti-LGBT sentiment is pervasive; they follow the old testament judgement that gays should be put to death. White people, however benign seeming, are the children of Satan.

The peculiar thing about the ICGJC is not that they believe these things. Given the history of Black people in America, it’s easy to see how the Yahweh of the Old Testament who freed the slaves of Egypt and rained down vengeance upon their captors would have a strong appeal. It’s unlikely that there *wouldnâ€™t* be a Biblical interpretation along these lines. Holy books in general seem to offer a never-ending source of rabbit holes in which to follow to almost any end.

What is strange is that they have recently become more aggressive in terms of tactics and visibility. Yelling their messages at passing cars and confronting people in person as they fill up at gas stations. While their numbers at the Oklahoma City rallies vary somewhat, they have never been weaker than 10 men and boys, and at most 30 strong and barely able to fit on the curb without pushing each other into traffic. These events seem to be an effort to recruit young black men here in OKC to the cause while at the same time aggressively announcing their presence in the city to the general public. I suppose itâ€™s working.

4 comments to “Black Supremacy in OKC: Who Are The ICGJC?”