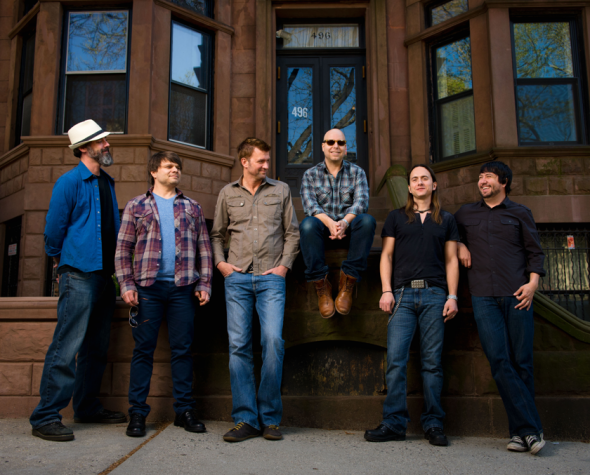 What goes around comes around. And sure enough nostalgic interest returned for the serious minded post-grunge music of the late nineties. Lead singer of the multi-platinum band The Verve Pipe, Brian Vander Ark, heard it through gig opportunities.

â€œWe were offered to go on these 90s reunion tours and that did not appeal to me whatsoever,â€ Vander Ark says. â€œRock boats and those kinds of things. We said letâ€™s do something different.â€

After a friend offered them a slot to record a kidâ€™s song on a charity album, Vander Ark says the band fell into recording a bunch of kidâ€™s-family music. There was 2009â€™s â€œA Family Album.â€ And now, â€œAre We There Yet?â€ a set of high energy tunes told from the earliest impressions of school days– â€œIâ€™m Not Sleeping In (Cuz Itâ€™s Saturday),â€ for example. Â The reshuffled group enjoyed it. And found plenty of gigs through it.

â€œWhen we did The Family Album we had no idea that Lollapalooza had a kidâ€™s stage. We fell ass backwards into these opportunities to do this fun music. Â We were doing [a lot of shows again]. WeÂ sometimes doÂ two shows a day. [In OKC] we could very well do a bar show that night.â€

The Verve Pipe started as a successful high energy bar band in Lansing, Michigan, inspired mostly by Nirvana and Bob Mould. TheyÂ made their splash into pop and alternative radio with the song “The Freshmen” from their 1996 album “Villains.” When I heard “The Freshmen” for the first time, Â over the loudspeaker on an elementary or junior high field trip to Frontier City, the song instantly joined otherÂ voices as aÂ gateway to â€œserious music.â€ The largely fictional song gave itself space and dealt candidly with a girl who gets an abortion and later overdoses on Valium. â€œI wonâ€™t be held responsible,â€ the young narrator sings, trying to hold onto his innocence. The singleÂ echoing notes at 1:50 took the emotions home. There were soon other songs about death that stood out among the angsty youth culture of the time: Â Blink 182â€™s â€œAdamâ€™s Song,â€ Third Eye Blindâ€™s â€œJumper,â€ Counting Crows â€œRound Here.â€

Vander Ark remembers the song being different from everything else on “Villains,” tracks withÂ straight rock productionÂ and ambiguous lyrics. “The Freshmen” was a story song that cut right to the chase.

â€œThat song had been written five or six years earlier,â€ he says. â€œI think it really was the production and mixing that made it make sense. When people bought the album it wasnâ€™t too much of a grasp to get to the other songs and have itÂ make sense . I recall it having the same guitar tones and the same feel. I still think it fits with that genre and that time.â€

So in steering his songwriting for kids it was a nice change for Vander Ark to write less angst driven material from a new perspective, or throw an oboe in here andÂ there. Indeed, the family songs brought the band back together into the 2000s. Â But still, the heavy stuff was a presence. In writing the song â€œWhen One Became Twoâ€ on “A Family Album,” Vander Ark had toÂ reformatÂ the song he was writing,Â â€œWhen Three Becomes Two,â€ about the death of a child. Finger snaps, a woodwind, barbershop harmonies and a snappy beat accompany the new,Â finished lyrics.

This new direction doesnâ€™t please all audiences. The band once played a festival in Birmingham on the kidâ€™s stage. Fifty kids, appreciative of the lighting-quick sets, watched, while the adultsÂ yelled forÂ “The Freshmen.” The band declined to play it. The adults booed.

But Vander Ark does appreciate the song. A self-described nomad, he sticks to the road, making living money on the new niche andÂ solo shows too. While “The Freshmen” comes in handy.

â€œSure, thereâ€™s always going to be ‘The Freshman,’â€ he says. â€œ It would be nice to have three or four more of those in me; Â but itâ€™s enough to pay the mortgage. Â But thatâ€™s about it. It doesnâ€™t take care of the taxes.â€

Wiggle Out Loud is free and open to the public. There will be fitness activities and hands-on arts and crafts. A side stage will feature junior local musicians, a bell choir from Cleveland Elementary and Mariachi band from Fillmore Elementary.