I forgot who used to write “Video Shitbox” for OKC.NET because it was before my time. And while I thought of dredging up that feature again, I decided to do something else. Here’s the deal. A few weeks ago I was trying to share a moment with my oldest daughter. Because I’m kind of ridiculous, I thought we could watch Sofia Coppla’s poignant, but bitter-sweet romantic comedy “Lost in Translation.”

As we prepped for “movie night,” she asked me the following:

Her: Whatâ€™s your favorite movie?

Me: I donâ€™t know, itâ€™s like choosing a color. How can you just pick one?

Her: Yeah, but everyone has a favorite movie.

Me: You asked me what my favorite movie is, and my favorite dumb movie right at this second is Encino Man.

I may have opened a can of worms, because what I did next was let her watch the trailer to both “Lost in Translation” and “Encino Man” before picking the movie we’d watch that evening. If you’re familiar with most 11-year-old’s sense of humor, then it shouldn’t come as a surprise that she picked “Encino Man” over the loveable, sad-clown antics of Billy Murray.Â  Plus she determined that “Encino Man” was, like, “way weirder than that other one.”

We did eventually get around to “Lost in Translation,” but I got to thinking about the nature of the ridiculously absurd. You see, instead of watching “Sharknado” last night on Syfy, which is exactly how it sounds, my family picked “Airheads.” We were in the mood for something goofy, bonkers, just completely bat-shit. Actually “Sharknado” would have been perfect, but we’ve been opting out of cable services since 2005. Mostly because cable shows are too vapid. Yeah, I know it looks like I just contradicted myself.

Honestly being ridiculously goofy is great fun every once in awhile. Especially if it is not mean-spirited, exploitative fun, like say watching “Toddlers and Tiaras.”Â  Shows like that are why we gave up on cable in the first place. Ok, and also because of the sick amount of advertising aired to push things no one truly needs. So faced with the task of raising media-literate kids, who we’d like to retain some shred of humanity by the time they reach adulthood, we decided to jump into the multimedia world of the Internet. I know, seems like another contradiction given the prevalence of porn and youtube trolls, but we actually do monitor their Internet usage and talk about responsible searches and trolls.

So NetFlix, Hulu, Amazon Prime Instant, and a few other platforms have now shaped our viewing habits. And I’m really not often sorry for the switch, except for missing “Sharknado,” but it’s only a matter of time before it releases its blood storm on the Internet too.

At any rate, I decided to test out this new feature on Netflix called “Max.” The idea is to offer an alternative to “Taste Preference Categories.” You know, not everyone wants to watch “Cerebral Romantic Comedies” or “Understated Indie Comedies” every night of the week. And because NetFlix has been mining your data since the first time you logged-in, “Max” is the platform’s new way of getting you to do more self-reporting. It does this by giving you suggestions in the form of a game show. One of the games has you pick a category, like Goofy Movies, and then you start rating 0-5 stars if you liked a movie, skip it all together by hitting “Not Interested,” or watch it right there and then by choosing “Play.”

This is how we landed on the 1994 movie “Airheads.” Our kids had never seen it and Lance and I hadn’t watched it over a dozen years. I think another reason we picked it is because my oldest might have a mini-crush on Brendan Fraser now, and because my husband challenged me earlier in the week to come up with a death metal/heavy metal/hair metal mixtape at some point.

I’m not going to tell you this is the best music comedy in the world. It’s not really even like “Wayne’s World,” which is the closest thing I could compare it to for a few reasons, like the various connections to SNL alumni. But if you have pop culture-music nerd moments, you may really enjoy this movie for what few subtleties it has to offer. Not that you need to catch all the throw-away references, but it certainly gives it an extra layer of ridiculous if you do catch them.

Take for instance actor Michael McKean playing the radio station’s douche-bag programming director, Milo Jackson. Not to ruin anything, but he’s kind of a sell-out and doesn’t really care about the “music.” And he’s at odds with Ian, played by Joe Mantegna, who is KPPX’s rock DJ. In a really great scene where Ian pushes up all the control knobs to their max levels and says, “You know what they say, Milo, you know you’re old when the music is too loud!,” one can’t help but laugh at a certain old ass reference. You see along time ago (in the ancient days of 1984), Michael McKean was in a mockumentary called “This is Spinal Tap.” While McKean wasn’t in the scene where the audience is informed that these amp’s knobs go up to 11, it was a nice reference of sorts. And in its own way I think this scene in “Airheads” underscored the movie’s overall premise that it is the tendency of “old” guys in the industry, the ones who lost their outrageous passion for the music, to become dried-up old cronies who only want to exploit the next new band or next new music trend.

Actually, Ian was headed down the same jaded old-guy path until The Lone Rangers (Brendan Fraser, Steve Buscemi, and Adam Sandler) break in and take everyone in the station hostage somewhat unintentionally. This loveable band of misfits just wants to be heard in an industry where getting a break is nearly impossible unless you know someone who sees the potential to harness your talent for their bottom line, ethics be damned. Also Judd Nelson, who you might recognize as the malcontent rebel John Bender from “The Breakfast Club,” plays a loathsome, oily industry yuppie named Jimmie Wing. There’s even a wonderful little subplot about being an artist with something to “say.” It comes up a lot in conversation, like when Buscemi asks, “Well, did have Hendrix have anything to say with ‘Purple Haze’?” I’m not sure “Airheads” ever does more than proclaim “ROCK AND ROLL.” But maybe that’s all that needs saying. 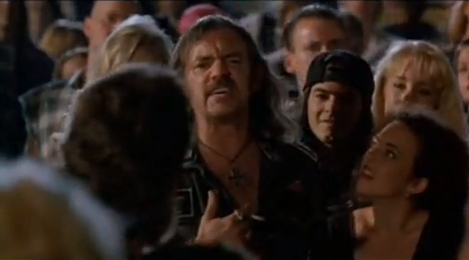 Did you know being nerdy before turning metal is ok? Lemmy Kilmister shouts “I was editor of the school magazine” to prove he wasn’t all rock and roll before he was all rock and roll. Others talk about their love of D&D and other less “metal” hobbies in a lead up to the film’s utterly ridiculous finale.

P.S. Random fact that ties Ernie Hudson to Billy Murray, both of whom are mentioned in this post, is their time together in the movie “Ghostbusters.” Also Harold Ramis, also in “Ghostbusters,” is in “Airheads.”