Perhaps one might even call it privileged or entitled.

I’ve always been fairly open about my atheism. Not in a militant way, but I don’t shirk the question or otherwise divert attentions when the conversation rolls around to “So, where do you fellowship?” At times that’s been awkward, other times less so. Sometimes I even throw it out there unbidden so people can make their own choice if they want to associate with me. You know, like making an informed desicion about who you can be friends with or whatever. I found being open in this way has lead to some unlikely friendships with Christians, but also deterred the real hardcore fundies from getting too close.

It wasn’t till I watched this video of a pastor going to town with shaming his entire congregation, that I realized how hard it must be for others to be as brazen with their lack of faith. While I grew up under the banner of the Catholicism, I didn’t have to contend with this level of mental bullying from the pulpit, mostly because I’ve been to mass conducted in Latin, a language I barely speak/read, and then a few masses where the priest was inclined to lecture us with boring “Star Trek as Life” analogies. Was I shunned a little bit for speaking out about the faulty math in the Bible during youth groups? Yes. Did I care? No, not really. It was really just small petty stuff, like being called by the wrong name openly, so I didn’t really feel a reason to get too worked up over it. So pretty much from 18 and onward I just completely abandon the ritual of going to church. It wasn’t for me. It wasn’t my community. Even so, I can’t imagine growing up with this guy for a pastor. He reminds me of the Phillip Seymour Hoffman character Lancaster Dodd from Paul Thomas Anderson’s “The Master.”

It is uncomfortable to watch Pastor Standridge when he calls people out for being less than perfect, make examples of them in front of the entire congregation, tell them all they’re wretches, but that they need to thank the Lord and hear his message that they have Standridge as their own personal savoir. You know because he is the man who will, I assume like Moses? (I really drowned out that part when it was being taught to me), lead them to the promised land by telling them the “truth.” Unfortunately, he’s just an asshole. He even calls out the video production kid, Cox, for laughably trying to establish his own “kingdom” in the video room. Apparently Pastor Standridge walked in on an informal “young people” meeting. But this unseen Cox could be a man too. It’s hard to tell with Pastor Standridge. At one point he hugs a guy who looks like he’s in his late 20s and calls him “big boy.” It’s a little creepy.

Another creepy thing that Standridge does to his congregation is to really belittle their sense of self worth to him as people. I believe “big boy” and his bride-to-be, because of course she had to be dragged into this diatribe, were estimated to be worth less than .15 cents. Inject a big heavy sigh here. I really feel for these people. I can’t imagine someone having the gall to say that to me, and then expecting me to return the next weekend, and not only that, but offer up my paltry .15 cents to pay to be harassed. And for what? Not knowing your direction in life? For what it is worth, that appeared to be “big boy’s” transgression.

And like a domestic abuser with mental control over his subject, Standridge threatens to withdrawal his “love” and leave his congregation for a more loyal, poorer community if they don’t get their act together and start listening to his sage advice. The people he would ditch them for are poor rural people who are basically described as those without a pot to piss in and who will gladly shout Jesus’s name for him. Shockingly this does not lead to more people in his congregation standing up to shout “Jesus” or “Amen.”

If you want to get the full experience, by all means watch the video.

Anyway, I’m an atheist, so what does this have to do with me?

The Pastor Standridges out there are producing some miserable, downtrodden people. And probably a lot of pissed off ones too. Some might think they’ve been genuinely helped by him, and maybe in some way they have. I wouldn’t deny them their comforts, it’s kind of a rough world out there. But I think divorcing people of their ability to make informed choices in their life runs contrary to promoting community spirit. How does tearing down a person encourage personal growth and motivation? How does it allow people to connect with each other if they’ve been publicly humiliated for being adrift or daring to hold an unsanctioned church meeting? I think about all the Joe Kleins out there who give secular folks a hard time for not being visible enough, but where in this picture do the Standridges of the world fit?

Since this video was obviously leaked in that “fair use” kind of way, I think that church A/V people such as Cox feel like they need to provide that viewpoint. I do imagine it stems from drive to show Standridge at his worst, or possibly how he is everyday, but I also think it is out of frustration for what they have to deal with every Sunday or however often their told they have to congregate. For all we know, “young” Cox dared to have a film discussion up in his “kingdom” or whatever.

I’m not going to be silly enough to tell people who have to deal with the Standridges of the world that they just need to become atheists or even agnostics. I won’t mock them for staying with guys like that. Ideological belief systems really belong to those who hold them. But if you’re miserable because a pastor is taking out his frustrations on you, take these guys up on their offer to be booted out to another congregation who will “love” them more. Or just establish another religious community. America is certainly all about freedom of and from religion. Remember, you have rights people. If your idea of community is to find more like minds and establish something that works, then shoot for that. 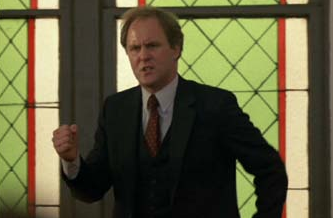 Screen shot from a google image search, amusingly found on the website: http://thecomposite.wordpress.com/2011/06/20/when-beach-bums-sort-of-kind-of-attack-the-sequel/

I’m going to conclude with John Lithgow’s loveable, but angry “fire and brimstone” preacher-type from “Footloose.” A movie inspired in part by Elmore City, Oklahoma. What you may not know about Lithgow is that he gave a really great Harvard commencement speech in 2005. He talked about his two Harvard educations. The one where quietly graduated from the Ivy League school and hid the existence of his degree because it didn’t exactly help him win roles for soap operas or potato-chip commercials. And then there was the “other” education he received when he was asked to be the on the Board of Overseers in 1989. This was a role left vacant by an arts graduate since the days of Robert Frost (so think the 1930s).Â  Lithgow used the position to build an annual community festival celebrating the arts. They handed out medals, and in doing so he had several epiphanies about the people they were rewarding.

“Several of the Medal recipients had something in common. They told us about pet projects they had initiated that went outside and beyond what they were known for. Having achieved success in their fields, they had looked around, spotted problems or challenges, and figured out how they could help. Then they had boldly used their success to make good things happen. They tended to tell their stories without self-aggrandizement, only after being prodded, and they tended to tell them in a sensible, businesslike manner, as if they were describing good carpentry or a well-run board meeting. I began to see that many of the qualities that made them great artists were the same qualities that made them good people. It was through their words that I began formulating my simple lessons to live by. They were creative, God knows. But their actions were also eminently useful, practical, and generous.”

That’s his advice to the 2005 class by the way: be creative, be useful, be practical, and be generous. Oh, and also finish big. You can read more of his advice for creating a proactive community here. But in the meantime, I don’t think it’s a stretch to imagine a world where “preaching” doesn’t have to carry the ugly connotation of degradation.

While letting your children decide whether they will believe in a God, become a vegetarian, play Sims instead of Minecraft, or giving them a choice between Encino Man or Lost in Translation, does seem like a weird mix of choices to be randomly thrown together, thatâ€™s just kind of the way life is. These things exist. They occupy a space.

Everyone has the right to make their own choices.