I’d given consideration to writing about this park for a couple of days, but when I got an e-mail from a woman who’d asked if we write about the efforts to help get it some extra funding, that sealed the deal. I know this park is insured, but since I’ve been using it with my family and to meet up with other families, I’ve really come to enjoy it. Partially because it reminds me of my husband, who is a combat veteran, and partially because I used to enjoy walking there at night. Obviously after the May 20th tornado a significant portion of it became a disaster zone. 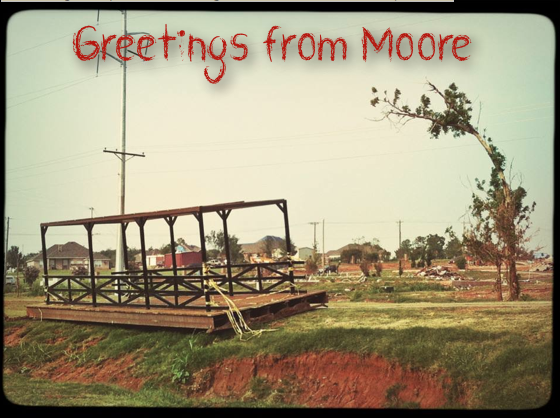 As you can see Veteran’s Memorial Park has seen better times. I took photos of my family on that bridge and smiled at many a stranger as we passed them on the trails. This happened frequently in the days before the zombie apocalypse, obviously. Still I was heartened to see people using the park just the other night. Parts of the park may look like hordes of the undead clawed away at it, but I swear to you on the souls of the damned, there were people running, walking, taking pictures, and meeting up with friends.

I don’t think I should have been as surprised to see people out and about, even though I had been actively staying away from that part of town, it doesn’t mean those who live closer to the area weren’t using it. It also bears mentioning in the first few weeks that place was backed up with traffic and there weren’t a lot of working lights. Not that they are many now, but it’s slowly improving. I think seeing at least a dozen different people yesterday proves that people are going to bounce back and rebuild their lives.

While I didn’t take an active part in the first round of efforts to build the park other than to donate some change and talk to the people who were raising awareness for it, I have come to find that I feel like a stakeholder in its future. This will once more be a great meeting place for people from all walks of life. And so while maybe I have a complicated relationship with Moore, because I know it’s not my forever home, my husband and I decided that for as long as we are here, we’ll do what we can to help make Moore a better community.Â  This is why we joined the a Facebook group page called: Vote 4 Moore – Live Positively.

It turns out Coca Cola is engaged in some philanthropic publicity campaign. While my cynicism dictates that this is Coke’s way of trying to say they promote “healthy lifestyles,” the more practical side of me realizes a concerted effort stands a chance, thus practicality wins. So everyday we’ve been logging into our “coca cola” accounts to vote in one way or another. I use Four Square because it equals five votes compared to an online vote, which only counts for one, which isÂ  how my husband prefers to vote. 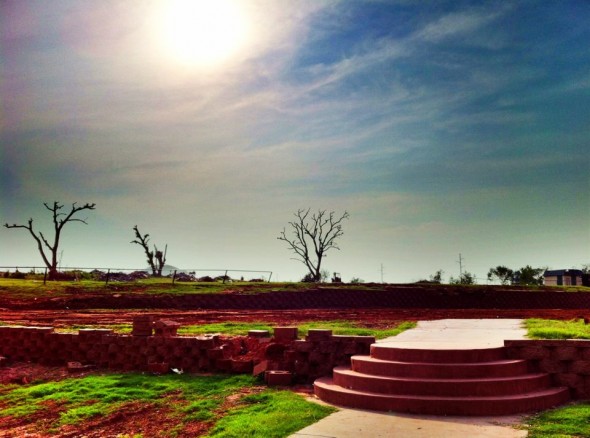 I find it a little surreal to view this image while recalling scenes of when kids used to play on really nice equipment here. One day I hope I’ll be taking happier photos here.

These directions come via the Vote 4 Moore – Live Positively page should you want to phone in any efforts to help rebuild a better and stronger community:

Get a Coca Cola account to vote online by registering your e-mail here (registering also allows you to sign in and check on your voting activity so you can verify that your votes are being counted and to change the park youâ€™re using to log activity with Map My Fitness): https://www.mycokerewards.com/register.doTo vote online (you must have a Coke Rewards account and sign in to the voting site with your Coke Rewards account):https://parks.livepositively.com/parks/index.html#/voteTo be eligible to vote via foursquare and receive 5 votes per day, set up an account (if you donâ€™t already have one) here:https://foursquare.com/mobile/login?continue=%2Fmobile%2FcheckinTo be eligible to vote via Map My Fitness by logging your daily fitness activity (20 minutes per day) and get 10 votes per day, register here: http://www.mapmyfitness.com/ (There are a lot of activities eligible, so donâ€™t let this part scare you.)

[Edit 7/3/13: I believe with Four Square you have to do it before 7 p.m. in order for your vote to count. And you have to link the Four Square account it via Coco-Cola’s site too. You can also vote via all three methods each day should you choose to.] 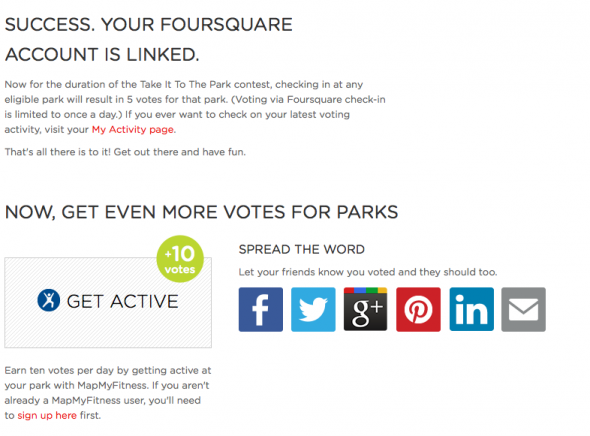