With May’s crazy weather behind us it’s time to welcome back the H&8th Night Market. Last month organizers called off the event because of severe weather. Despite the clouds of the apocalypse, there had been a promise made that when the night market returned it would be even bigger and better .

â€œWhen severe weather interceded last month, we made a promise to our supporters that we would return in June with our biggest, most epic event ever to make up for it,â€ said Laura Massenat, H&8th co-founder and co-owner of Elemental Coffee. â€œWe think the additional space, particularly the addition of 7th Street, will make our event much more dynamic and interesting for attendees, and it also gives us the ability to include an even more diverse array of the cityâ€™s best food trucks.â€

True to their word the organizers asked the City of Oklahoma City to expand the market’s footprint, not just in June, but for the entire 2013 season. So next Friday June 28th from 7-11 p.m. plan to grab friends and family and go down to Midtown off Hudson and 8th to go check it out. Keep in mind this food truck, music, beer and vendor block party will now include 7th Street between Walker and Hudson avenues too.

The Nature Conservancy will host interactive nature activities including a scavenger hunt and a hands-on exhibit of artifacts from its preserves in Oklahoma. Scissortale Salonâ€™s monthly pop-up shop guest will be The Salvage Room. Oklahoma Contemporary Arts Center will host a face painting booth. Wine & Palette will host a group art project in the Elemental roast room: painting poppies on a giant canvas.

CASA, a nonprofit that provides advocates for kids who have been abused and neglected, will sell raffle tickets for a trip for two to Los Angeles to attend the October premiere event for AMCâ€™s â€œThe Walking Dead.â€ The trip will include hotel and airfare, and an after party with the cast. Twenty percent of ticket sales will be donated to the United Way of Central Oklahomaâ€™s May 2013 Tornado Relief Fund.

For more information about H&8th Night Market, visit h8thokc.com or call 633-1703. Updates will be posted on Facebook and Twitter (#OKCNightMarket). 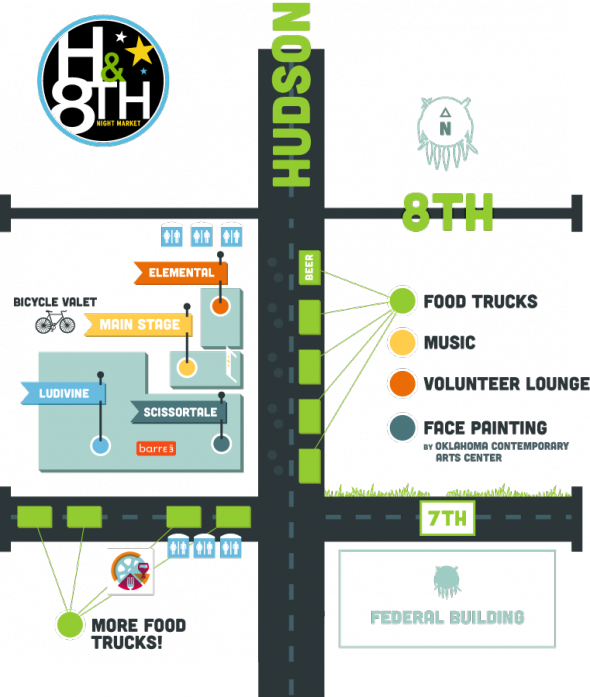 5 comments to “H&8th Night Market Returns with More Everything”