I don’t believe in high art and low art. I never have. There is only good art and bad art. The idea that it is medium and subject matter rather than craft and concept that makes a work good or bad is asinine. This concept didn’t even exist until the mid 19th century, and it thankfully is on the way back out today.

This is part of why I was so happy to see Dear Mr. Watterson, a documentary that gives Bill Watterson, author of the seminal comic strip Calvin and Hobbes, his due as a brilliant artist and writer. I should disclose my bias here; I first read Calvin and Hobbes in the early 1990s, and have probably read the entire decade plus long series of daily and Sunday strips. Like most kids, the only part of the newspaper I cared about was the comics page, and Calvin and Hobbes was so different from the standard joke-a-day strips that accompanied it in the Daily Oklahoman, which was too conservative to even print Doonesbury, that it couldn’t help but draw my attention. Calvin and Hobbes had everything that a thoughtful 12-year-old could want; dinosaurs, space adventures, talking animals, philosophy, satire, irony. The brilliance of Calvin and Hobbes comes from taking the inner life of children seriously.

Bill Watterson is a notoriously enigmatic figure, eschewing publicity, merchandising, and the trappings of fame. Every single piece of Calvin and Hobbes merchandise is a bootleg. It would have been easy to structure this film as a â€œRoger and Meâ€ style quest to find Bill Watterson, but this film is more interested in discussing Watterson’s art and demanding that we take it seriously. Through interviews with other cartoonists, art historians, and fans both ordinary and famous, the documentarians make a strong case that Calvin and Hobbes is a unique and significant body of work in the still evolving art of comics, perhaps rivaled in the daily strip format only by Walt Kelly’s Pogo and Charles Schultz’s Peanuts.

The film devotes a bit of time to the uncertain future of the comic strip in the age of the internet, or more to the point, the post newspaper age. I saw this film the same day that I saw Out of Print (review here) and this film in some way colored my perception of that one. On the one hand, anyone who can draw and write can now publish their own comic strip. Even here at OKC.NET, we don’t draw like highly-trained professionals and yet we published one. This is a great boon in a way, because there is no filter on artists. This is also the great failing of the current system. The great flood of new material makes it impossible to see all of it, so a lot of good work goes unseen and unread, and projects that would have blossomed with a little encouragement and time die before they have a chance to find an audience. This is the great contradiction of our new media landscape. 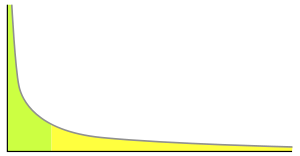 This is a power law curve. It occurs in systems with massive inequality. The music industry is the textbook example of this. When the mp3 era hit, people thought this would go away. The assumption was that the â€œsuperstar effectâ€ as it was called was an artificial creation of record labels (or, in this case, press syndicates) which would even out to a normal distribution once the means of cultural production were democratized. It didnâ€™t happen. What happened was that different people ended up on the left side of this curve than would have in the 1980s, often seemingly at random. This is where the concept of â€œgoing viralâ€ comes from; as Rebecca Black and Psy and any number of other momentary internet sensations prove, sometimes ideas just take off and no one is sure why.

So hereâ€™s the trade-off: the barriers to entry go away, but they go away everywhere at once. The only, only, only things that can get you from the skinny part of that curve to the thick part are promotion and luck.

Would Bill Watterson be able to find an audience today? That’s hard to say. I like to think that if you have the amount of raw talent that Watterson has, your audience will find you, even if it’s a small or marginal one. The more important question is, in an environment where self promotion is as much a part of the formula for success as raw talent, would an artist as media shy and private as Bill Watterson even enter the fray? What do we lose by forcing the quiet, reticent people who often become artists to be their own record label, or press syndicate, or printing press?

I have no idea where to find the answer to this question, but I do think this film is a good place to start looking.