Texas has a well-earned reputation as the most capital punishment friendly state in the union, executing more people since the reinstatement of the death penalty than any other state. You may be surprised, however, to find out that Texas doesnâ€™t execute the highest percentage of its populace. We do. Oklahoma has executed more inmates per capita than any other state since the US Supreme Court reinstated capital punishment in 1976. Oklahoma is third in the nation in overall executions, behind Texas and Virginia. 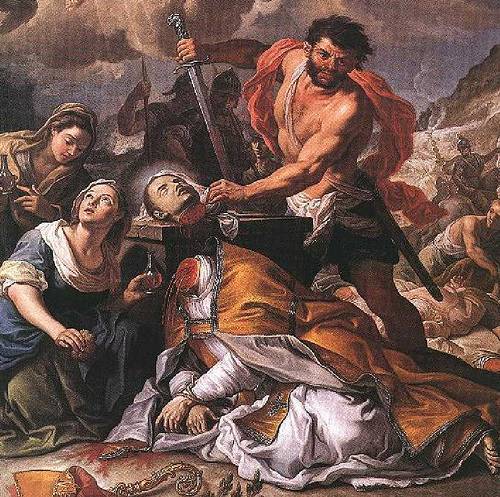 Beheading in the Renaissance, which we’ve replaced with chemicals. Because we’re more enlightened now, I guess.

In 2003, Oklahoma set a high water mark when it executed 14 inmates. Just two years before, it had set a national record by executing three women in the same year, making up a quarter of all women executed since 1976 nationwide.

Oklahoma is on track to surpass Virginia in overall number of executions soon. We also have over six times as many death row inmates as Virginia.

Even so, execution rates in Oklahoma, along with the rest of the nation, are on the decline. Oklahoma executed six men in 2012, but only one so far this year. Steven Ray Thacker was killed by lethal injection for the 1999 rape and murder of Laci Dawn Hill, an incident that led to three deaths in as many states.

Since Mary Fallin took office, Oklahoma has executed eight men. For a little perspective, Frank Keating had 51 executions on his watch, and Brad Henry had 39. Granted, both were two-term governors, but Mary Fallin is not on track to hit even half their numbers. Currently, Oklahoma has two inmates scheduled for execution in June.

Much like violent crime, Oklahoma is following but not keeping up with a national trend. Nationally, the execution rates in the United States have been on a slow decline over the last decade and a half. While the majority of public opinion has consistently supported capital punishment, the number of executions keep dropping. Currently, the United States is on track in 2013 to fall below its 2011 and 2012 numbers of 43 a piece.

So, why the drastic decline in death sentences? A little of it might be explained by the nationâ€™s falling violent crime rates, but the fall in death sentences have dramatically outpaced the decline of murders. A better explanation has been posited by political scientists Frank R. Baumgartner, Suzanna De Boef, and Amber Boydstun in their 2008 book, “The Decline of the Death Penalty and the Discovery of Innocence.” In it, they argue that the decline is largely explained by a change in the framing narrative around the death penalty. Polls consistently show that people are not morally opposed to the death penalty in principle, but they are increasingly concerned about the possibility of executing innocent people.

In a 2008 interview with Pennsylvania Inside Out, Baumgartner described the way the argument is being framed by current capital punishment opponents. Their effective approach is to describe â€œthe death penalty as a government program run by bureaucrats, and it is prone to cost overruns, mistakes and inefficiency.â€ He explains that historically the death penalty has been discussed publicly as a moral issue. As long as that was the case, support for the death penalty remains fairly high, but as the narrative changes to discussion of the economics and mistakes in sentencing, support erodes.

The use of DNA evidence and the rise of organizations like the Innocence Project led the change in narrative. Founded in 1992, the Innocence Project is a non-profit organization dedicated to using DNA evidence to overturn wrongful convictions and lobby for institutional reforms to prevent future mistakes. Currently, there have been 306 post-conviction exonerations through the use of DNA. In 148 of those cases, the DNA evidence was able to lead to the actual perpetrator. Last July, Sedrick Courtney, an Oklahoma man who had already been paroled after serving 16 years for a robbery and burglary he didnâ€™t commit, was exonerated through DNA testing of a hair found in a ski mask used in the commission of the crime.

The Innocence Projectâ€™s efforts coincided with, and was partly the cause of, a rise in the awareness in both academia and the public of the lack of reliability of eyewitness testimony and coerced confessions. There have been numerous high profile cases of death row inmates who have been exonerated after having been identified as the culprit by eye witnesses under testimony or convinced by police to admit to a crime they didnâ€™t commit. Most recently, in 2012 Louisiana inmate Damon Thibodeaux was proved innocent after spending 15 years on death row. Thibodeaux had confessed to the rape and murder of his cousin to police after nine hours of continuous interrogation.

It is almost certainly the case that innocent people have been executed in the modern era. For example, Texas executed Cameron Todd Willingham in 2004 for killing three of his children by arson. In 2009, after pressure from the Innocence Project, the State of Texas re-examined the case and found that there was no reason to believe the fire was caused by arson. Two days before the report was scheduled to be discussed by the Texas Forensic Science Commission, Texas Governor Rick Perry replaced two members and the chair, who cancelled the meeting. At the time, Perry was still claiming he wasnâ€™t interested in running for president. In 2011, the commission made recommendations to changes in arson investigation procedures in Texas, but based on an opinion from Perryâ€™s Attorney General they refused to consider misconduct or negligence by the prosecutors and investigators in the case.

Nobody, except maybe the governor of Texas, wants innocent people to be executed. The obvious response for politicians, if people are morally in favor of the death penalty but opposed to how it is practiced, is to reform the system. That has been the approach in a number of states, and Oklahoma is no exception. For example, House Bill 1068 was signed by Governor Mary Fallin after passing both legislative chambers with unanimous support. It allows any convicted felon in Oklahoma with a sentence of 25 years or more to get any biological material recovered in the investigation DNA tested at the stateâ€™s expense.

According to the fiscal impact report for HB 1068, it has the potential to cost the state quite a bit of money. There is no telling how many inmates there are in Oklahoma that want to have materials tested, but itâ€™ll cost $1,000 for each test on each item. Additionally, the state will be on the hook for appointing counsel to each inmate that requests the procedure.

This outlines the other problem that the modern capital punishment system faces. It is expensive. There is a long judicial process for capital cases that doesnâ€™t exist for life sentences.

In a May 7 speech to the Oklahoma Chapter of Americans United for Separation of Church and State, Rev. Dr. William Tabbernee, Executive Director of the Oklahoma Conference of Churches, argued that the financial costs of capital punishment make it unfeasible. Tabbernee referenced a report out of Loyola University that looked at Californiaâ€™s costs for capital punishment, and found that the state spent millions more per inmate than it would have for life sentences. Some of the increased costs came from more expensive trials, enhanced security on death row and attorneysâ€™ fees, both prosecution and defense. It found that the state is spending an additional $184 million a year by having the death penalty. So far, the state has spent $4 billion to execute 13 inmates since 1978.

Proponents of capital punishment historically have appealed to itâ€™s potential deterrent effects to mitigate any economic arguments. That was the justification put forward by the Supreme Court when it reinstated the death penalty in 1976, but according to Tabbernee, those appeals havenâ€™t held up to the data.

â€œMost crimes where somebody ends up being executed are committed either in the heat of passion or as a result of trying to escape from some other crime,â€ Tabbernee said.

A group of scholars from the National Research Council published a 2012 review of all of the academic literature on a link between capital punishment and deterrence, and found that it canâ€™t be justified. Echoing Tabbernee, committee chairman and criminologist Daniel Nagin told the New York Times, â€œNothing is known about how potential murderers actually perceive their risk of punishment.â€

Over the last few years, a number of states have opted out of costly reforms to capital punishment and moved to abolish it altogether. On May 2, Maryland become the sixth state in six years. Last November, voters in California defeated a ballot initiative to eliminate the death penalty by just 4%.

Other states are going in the opposite direction. Floridaâ€™s House and Senate sent a bill to Governor Rick Scott that would fast-track executions. Thatâ€™s definitely one way to save money.

Republican-controlled states like Oklahoma are going to face a real dilemma on this issue in the foreseeable future. Republicans have a reputation for being tough on crime, but the narrative on the death penalty is changing to one of concern about incompetent and corrupt government practices. Capital punishment is a state action on behalf of the electorate, and people generally see a strong ethical interest in making sure that we donâ€™t execute innocents. When there is a viable alternative like life in prison that doesnâ€™t have the finality that execution imposes, legitimate concerns about false incarceration are going to push public sentiment.

The current situation creates a catch-22 for any state that wants to keep capital punishment. If a state moves to solve for the problem of executing innocents, it will drive up costs. If a state moves to drive down costs, itâ€™ll increase the already high-risk of executing an innocent person. Oklahoma is about to take the first fork, while Florida is heading toward the second. In the meantime Massachusetts will be reaping the fiscal rewards while avoiding the ethical concerns altogether.

Note: Clayton Flesher was a paid speaker at the Oklahoma Chapter of the Americans United for Separation of Church and State Spring Dialogue where Rev. Dr. Tabbernee was quoted.