This time last week I was brimming with anticipation to hurry up and get to Austin Psych Fest. Rather than feel rushed to immediately exclaim “Yes! I wanna go back right now!” I decided to let the experience sink in and catch up on sleep. I’ve also been waiting for the official numbers to come in about attendance and other areas of festival growth. Word had it that this was the biggest turnout APF had seen in its six year history. 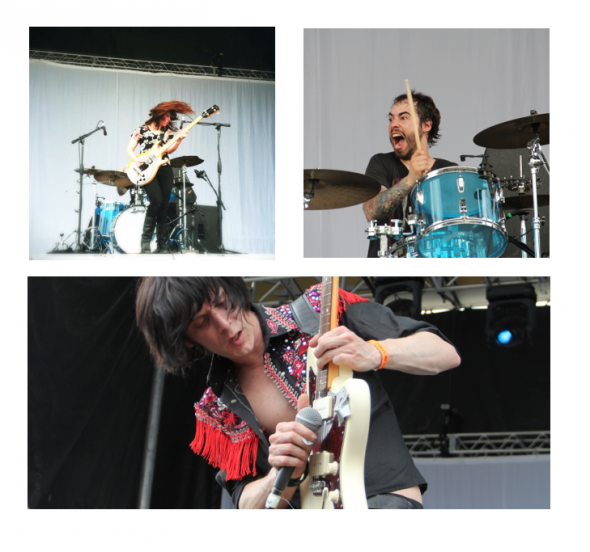 I had many favorites, but Capsula is amazing live, so much energy. This was their first time play Austin Psych Fest too.

If you love reverb-drenched psych rock and want to hear amazing national and international bands, than Austin Psych Fest is well worth the amount of effort it would take to attend. I know there’s a lot going on in the OKC metro that same week, but if you’re a multi-tasker it shouldn’t be a hard to sample a little bit of Oklahoma City’s Festival of the Arts, since it runs all week, and even hit up Norman Music Festival on Thursday night before heading out of town to Austin on Friday morning.

The weather was great Friday night and Acid Mothers Temple ended the evening with a Japanese group chant you could hear from the camp grounds. Were you in your tent by that point, like I was, it would be akin to experiencing a psychedelic Japanese lullaby. Saturday morning we woke up to rain and chill, which would have been fine, but the showers weren’t working. If I were in regular camper mode, I would have just hung out at the tent and slept some more, but duty required a shower and electricity for our equipment, so we got a hotel room. It is also worth noting that the camping area also had nice portable bathrooms. Read: toilets that flush and sinks with running water. Since we had bought the camping passes, we did visit the okc.nap station, as we started calling it, and availed ourselves of these facilities, which surprised us as they were on par with with artists/press facilities. 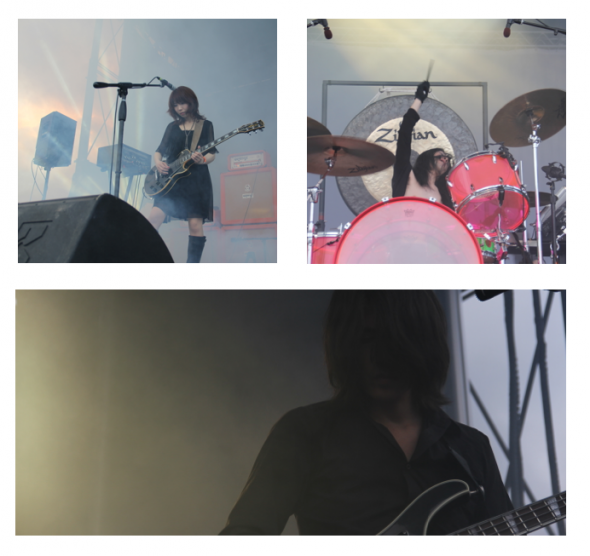 From what I saw, which was not every night of APF, the security around the camping area seemed to do their job just fine. We left the okc.nap station in the family camping area for the duration of the weekend. Each day when went to check on it, it appeared to us that no one had messed with it nor stolen anything. This is the beautiful thing about all of us weirdos: no real desire to take other people’s shit. 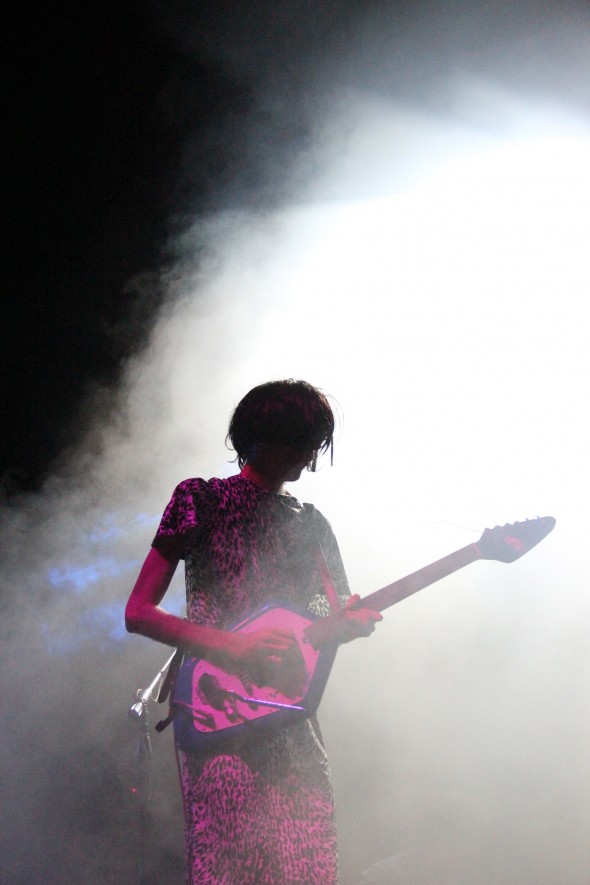 I’ve had my fair share of dealings with security at various venues over the years, and APF’s security seemed fun when compared to some of the stone-faced bouncer types I’ve encountered elsewhere. And while you could tell who the weekend was starting to wear on by the time Sunday rolled around, the staff seemed to be handling festival-goers with a smile and a quip throughout. 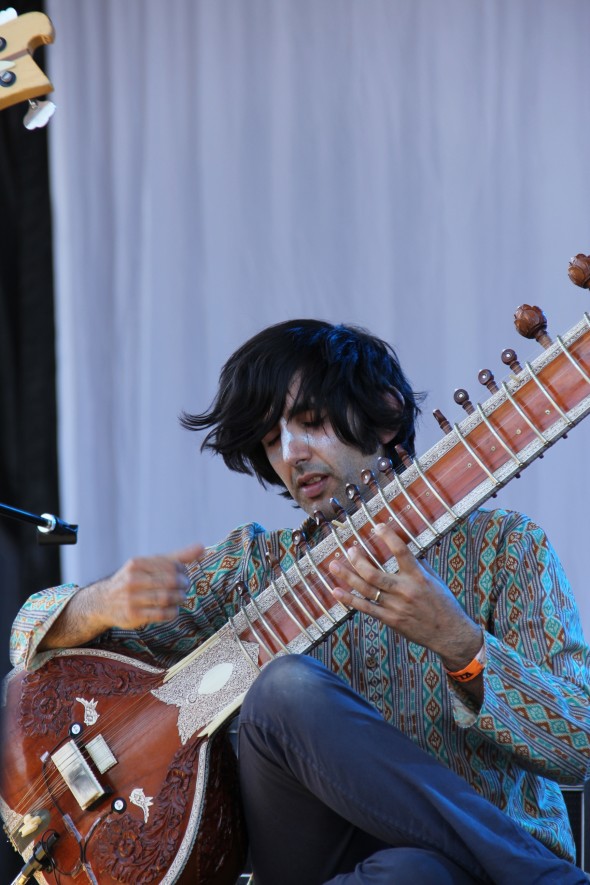 Would I take my children to this event? No, not anytime soon. But it’s because APF isn’t set up for young kids: pony rides and kid attractions there were not. This isn’t to say there were not any families around, because there were, especially in the camping area. But I suspect given how few children I saw on the festival’s concert grounds, that it is likely parents and caretakers might have traded-off with each other to catch shows. I know that’s what I’d do if I didn’t want to miss APF, but had young children I couldn’t leave at home just yet. Random aside: there were lots of families in the press/staff/artist area. It warmed the heart to see moms nursing babies as people burned sage and swayed in hammocks, while at the tables and various couch groupings bands hung out and networked with the press or others.

It was a great time. Having had a look at this year’s numbers and reflecting on the way the majority of the weekend went, I can see it growing even more in future years. Austin Psych Fest started out as a small word of mouth event in 2008 and has been gaining popularity every year since. According to Austin Psych Fest, ticket sales were up 74 percent and at the peak of attendance they estimate 4,ooo people were on the grounds. Of that number, they estimate roughly 613 were festival campers.Â  80 bands performed. 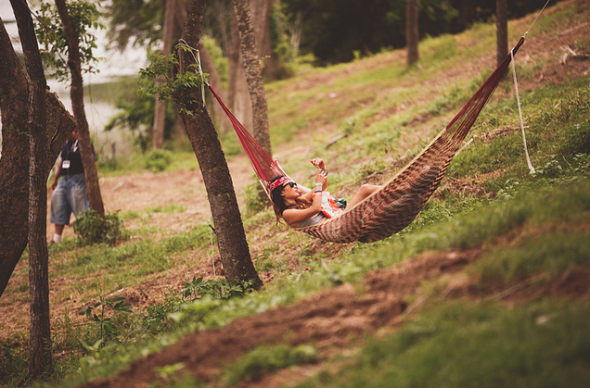 There were hammocks else where too. Quality power naps are essential. Photo: Pooneh Ghana via APF flickr

At any rate, we got a lot of good photos and met some bands, festival goers, and vendors that impressed us in one way or another. For months I’d been excited about APF’s line up, and I was not disappointed with performances. My only regret is that we missed Os Mutantes because of the rain. But that’s not their fault; and press contact Erica Shamaly was great about responding back about the rain situation to let us know we still had time to catch Deerhunter. Next year, I will definitely be factoring in some kind of rain gear in the event that happens again. 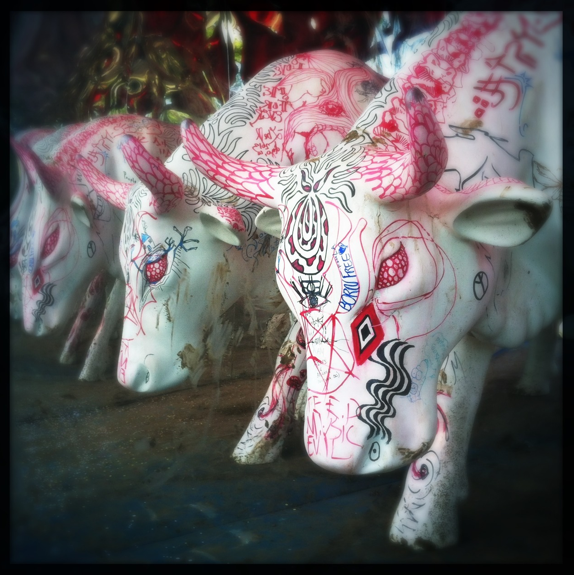 I’m told this was an unintended art project. I’m not buying it. You don’t leave an unblemished white cow around people with sharpies. Photo: Helen Grant

All said, this was a kick ass festival. I would totally rearrange what I’m doing to attend again. And without the learning curve thrown in, I’m betting next year will be an even better time. Watch this space for the remainder of our interviews and coverage, it was a lot to digest. 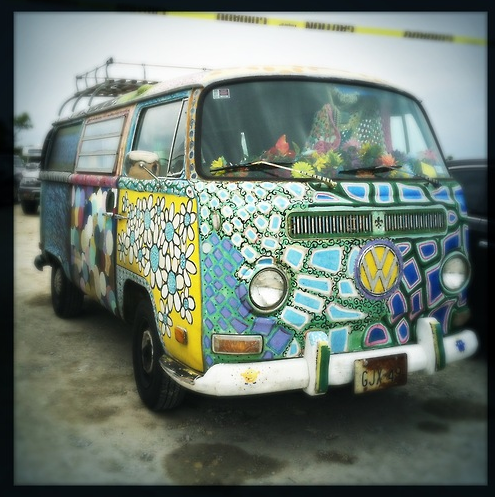 On the bright side, even though we didn’t spend much time camping, we did get to see some interesting vans on our hike from the okc.nap-station to the concert grounds. Next year I’m hoping to snap a pic of this epic Venus in Furs-looking van I saw parked next to me on Sunday. It wasn’t as colorful as Beatles-land van, but it was painted with the spirit of fun too.
Photo: Helen Grant