We are living in the most peaceful time in history. There is less violence in the world today, on average per person, than at any other period. Not only that, but rates of violence in the United States are lower now than they have ever been. Oklahoma is almost certainly no exception.

Taking out the part about Oklahoma, this is the thesis of Steven Pinkerâ€™s book, “The Better Angels of Our Nature, Why Violence Has Declined.” Pinker argues effectively that violence has declined both in the long and short term, and proposes explanations for why this is the case. Wikipedia summarizes Pinkerâ€™s position as well as anyone:

“Among these social changes cited as bringing about the ascendancy of our “better angels” are: the emergence of a strong government/authority with a monopoly on violence, the interconnectivity of cultures through the need for trade; increased literacy, urbanisation, mobility and access to mass media – all of which have exposed different cultures to each other – and the spread of democracy. Pinker stresses, however, that ‘The decline, to be sure, has not been smooth; it has not brought violence down to zero; and it is not guaranteed to continue’.”

Pinker does a wonderful job in the first half of his book demonstrating that violence genuinely has declined throughout history. The key to understanding Pinkerâ€™s case is to keep in mind that he isnâ€™t talking about actual incidents of violence, which very well could have increased, but to look at rates of violence compared against the overall population. Incidents of violence per 100,000 people has plummeted to all-time historical lows.

While some people have tried to argue that Pinker may be mistaken in the long-term, his argument that violence declined in the last half of the twentieth century, particularly in Western democracies, goes undisputed. In the United States, there was a peak in the 1960s, followed by a steady decline in all kinds of violence since. In just the last twenty years, the United States has seen the rate of violence decline so much that the incidence drops have outpaced population growth, which is to say violence has declined by over 37 percent at the same time that the population has grown by over 22 percent. If you combine the numbers, the actual rate of violent crimes per 100,000 people in the United States has dropped by nearly half in just twenty years.

Oklahoma has not bucked the national trend. It also has become less violent in the last twenty years. In 1993, there were 20,498 violent crimes reported in Oklahoma. That number peaked in 1995 at 21,748. Since then, the number of reported violent crimes dropped to 17,630 in 2011. 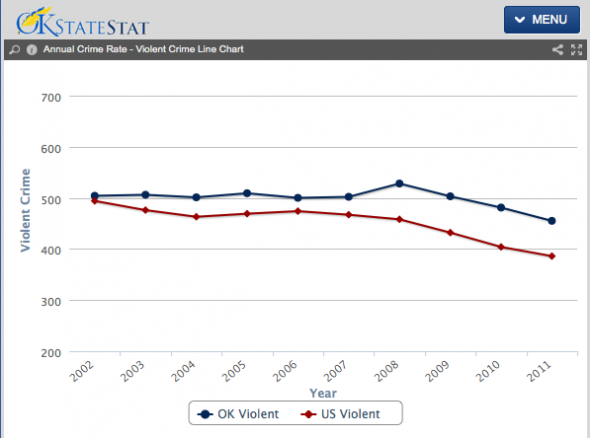 The sections of the country that are the most violent might be surprising. Wikipedia has a nice graphic showing the most violent states as of 2004. The states shaded in the lightest pink means under 100 violent crimes per 100,000 people were reported in 2004, while the states shaded with the darkest red indicates over 800 violent crimes per 100,000 people were reported. 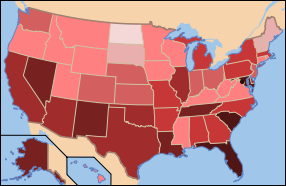 As you can see, Southern states tend to be more violent than Northern states. Pinkerâ€™s explanation for this is that the people who tended to immigrate to the Southern US were herders and just happened to live in a more anarchic situation than the agrarian settlers of the Northern half of the nation. Now add in Americaâ€™s frontier history, where the cliche of the lawless cow town and dangerous gold rush community depicted in popular culture isnâ€™t too far off the mark. After all, Deadwood is based on a true story. Pinker sums up the impact of this cultural remnant in an editorial he wrote for the New York Times called â€œWhy Are States So Red and Blue?â€:

“But then why, once stable government did arrive, did it not lay claim to the monopoly on violence that is the very definition of government? The historian Pieter Spierenburg has suggested that â€œdemocracy came too soon to America,â€ namely, before the government had disarmed its citizens. Since American governance was more or less democratic from the start, the people could choose not to cede to it the safeguarding of their personal safety but to keep it as their prerogative. The unhappy result of this vigilante justice is that American homicide rates are far higher than those of Europe, and those of the South higher than those of the North.

If this history is right, the American political divide may have arisen not so much from different conceptions of human nature as from differences in how best to tame it. The North and coasts are extensions of Europe and continued the government-driven civilizing process that had been gathering momentum since the Middle Ages. The South and West preserved the culture of honor that emerged in the anarchic territories of the growing country, tempered by their own civilizing forces of churches, families, and temperance.”

Oklahoma was one of the last states fully tamed by government, with only Alaska coming relatively later. Another book Iâ€™ve been reading through, â€œAn Oklahoma I Had Never Seen Before,â€ is a progressive history of Oklahoma. It openly discusses how weak the territorial government had been in the decades prior to statehood, and how there was a time in Oklahomaâ€™s pre-state history where a majority of the population were illegal settlers. These settlers would have not had the same level of recourse for government intervention in disputes as nearly everyone else in the country.

One thing that hasnâ€™t dropped as much in Oklahoma over the last few years is the murder rate. The number dropped from a high of 400 in 1995, the Murrah Building bombing accounts for 168 victims, down to around 200 a year in 2000, and has hovered around that number ever since. The murder rate in Oklahoma in 2010 was 5 victims per 100,000 people.

There is a very useful chart in the Performance Statistics section of ok.gov that shows that Oklahomaâ€™s murder rate has either met or been above the national rate every year for the last decade. 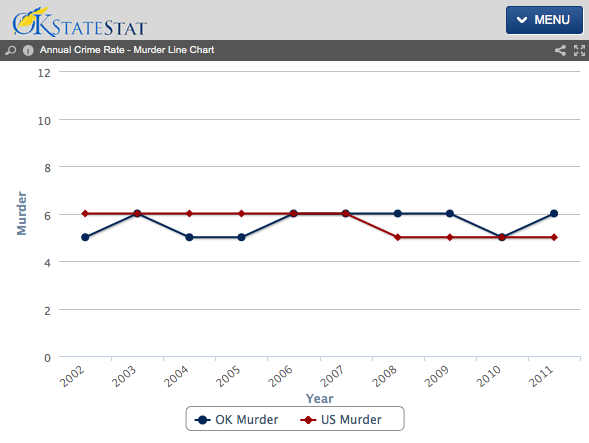 Comparing Oklahomaâ€™s violent crime rate to some other states might also prove interesting. Remember, Oklahomaâ€™s violent crime rate per 100,000 in 2010 was, by my count, 478. Compare that to New Yorkâ€™s at 391.3, and Californiaâ€™s at 413.3. Even Texas beats us, just barely though, with 450.6 incidents. Oklahoma doesnâ€™t compare that well to any of the places we begrudgingly glance toward when trying to decide whether weâ€™ve arrived.

According to the arguments laid out by Steven Pinker, if Oklahoma lawmakers and leaders want to make this as safe a place to live as say, New York, they have to embrace role of government as the only legitimate use of force in settling disputes, encourage urbanization, and accept that government has a legitimate role to play in spreading the ideals of Enlightenment through education and rational inquiry. Unfortunately, we have a political climate right now where counter-Enlightenment groups like Oklahoma Conservative Political Action Committee (OCPAC) and the Oklahoma Tea Party have a disproportionate role to play in the stateâ€™s public discourse.

If you want to skip the book, here is a short 2o min presentation from Steven Pinker about the decline in violence over the course of human history:

For fun: Do you recognize the phrase “The Better Angels of Our Nature”?
Here’s a hint: Abraham Lincoln.

Wikipedia Entry for “The Better Angels of Our Nature: Why Violence Has Declined.”

Steven Pinker on “Why Are States So Red and Blue.”

One comment to “The Better Angels of Our Nature: A Look At Oklahoma’s Violent Crime Rates”