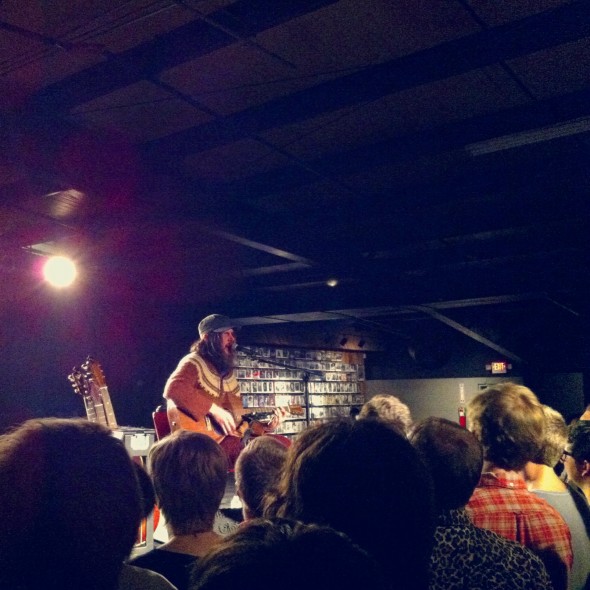 Jeff Mangum performing at the Diamond Ballroom this past Saturday. Photo by Helen Grant

“I’m too old for concerts.”

That was the feeling I had this weekend before the Jeff Mangum concert at the Diamond Ballroom. I haven’t been to a concert in over 2 years, coincidentally, my son is almost exactly 2-years-old, and the way the evening was shaping up, I didn’t want to go to any more in the immediate future. I missed the exit that takes you from I-240 to Eastern Ave. and instead went down a few streets and got to enjoy a journey that made me feel like I was hosting a travel channel show called â€œAmerica’s Terrifying Backroads.â€ I figured that I apparently had become one of the 30-year-old dudes I would see at shows years ago, standing in the back, arms folded, thinking â€œYeah, The Pixies were better live.â€

I always hated those guys. I felt sorry for them. Why go to a show if you can’t be in the moment and enjoy it?

It’s safe to say that the promoters of this show underestimated the demand by quite a bit. It was originally slated for the ACM@UCO Performance Lab, a decent, but smaller venue that Mangum, the man behind the cult band/bedroom studio project Neutral Milk Hotel, could easily fill. He did fill it, almost instantly, and then added a second show, which also filled up. That’s what prompted the move to the Diamond Ballroom, usually reserved for mid-to-high demand metal acts and some larger Indie bands. I expected to see a room of 30-something guys and girls reliving the glory days of 1998. (If I knew that 1998 would one day be seen as the good old days, I probably would have given up then and there.)

Instead, the crowd was packed to the brim with high school kids. My jadedness started to ease. Neutral Milk Hotel is best known for their second, and to date last album. “In The Aeroplane Over The Sea” is the sort of dense, literate album that demands and rewards repeated listening. It it is packed with lyrical and sonic surprises and is delivered with disarming earnestness. In short, it’s a record very nearly designed for thoughtful 10th graders, past and present. I was happy to see that this piece of art had effected them the same way it effected me 13 years ago. Concerts are actually for them, in the same way that Christmas is actually for 5-year-olds. Adults can still enjoy it, but it’s all diminishing returns after that magical peak.

The things that annoyed me – the heat, the BO, the beards, the people wearing heavy coats in the midst of the heat, the way that teenage girls apparently draw out the laaaast wooooords of every sentence now, the way that people abandon all notions of civility as they jockey for position trying to be as close to the stage as possible – all of that sort of went away when the show started. It was one of those lovely scenes that sounds hokey if you weren’t there. It was basically a huge sing-along. When you only have two records, you don’t have a huge pool of songs to pick from, so it seemed like everyone who was there knew every word to every song and was belting them out with the same sincerity as the artist himself. I bet that doesn’t happen at Guided By Voices concerts; actually it probably does, but that’s because GBV fans are weirdly obsessive.

The scene of all of these people, from those as young as 5 to old enough to have a long gray beard, standing in this huge country dance hall singing along with these strange songs about life and death and reincarnation and love and Anne Frank- it was really kind of lovely.

I eventually yielded to my old man-ness and went to the back to stand below one of the ceiling fans, but I didn’t have my arms crossed or my nose up. I was glad to be there. I think I probably will start standing further away now, though. If there were chairs I would have sat down. I’ve stood right in the front at enough concerts at this point. My ears and knees have had enough of it. I think I will start going to concerts again when I can; I’ll be the guy who buys his merch first thing and stands close to the door …because it’s after 10, and I don’t want to have to wait in post concert traffic. I’m still getting used to this â€œadulthoodâ€ thing.

One comment to “Jeff Mangum at the Diamond Ballroom: My First Concert As A Grown Up”