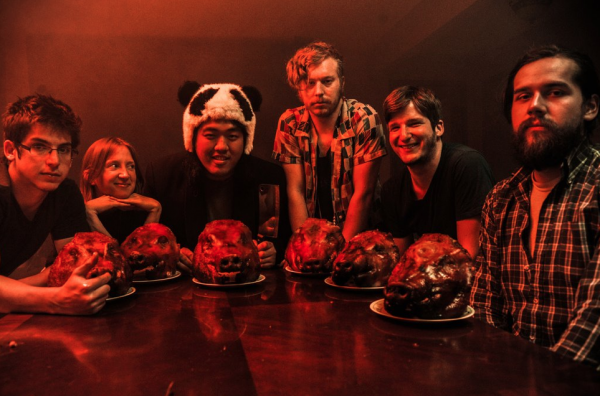 OKC.NET: So your celebratory show at the Conservatory this Saturday, got any special plans for confetti or the like since this is the first show the band will be playing now that Julian is back from his sojourn across Iceland?

Brennan Barnes: I don’t give away our crazy…(I also rarely plan it.)

(He might not give away any hints of future cray-cray, but here’s the deal readers, Brennan has said, perhaps jokingly or maybe not, that he would like to construct a big paper mache penis and explode confetti all over you and your best friends at one of their shows. If you can help them in this endeavor, and you should if you have intimate knowledge of gluey bits of paper, chicken wire, and air cannons, then contact them here.) 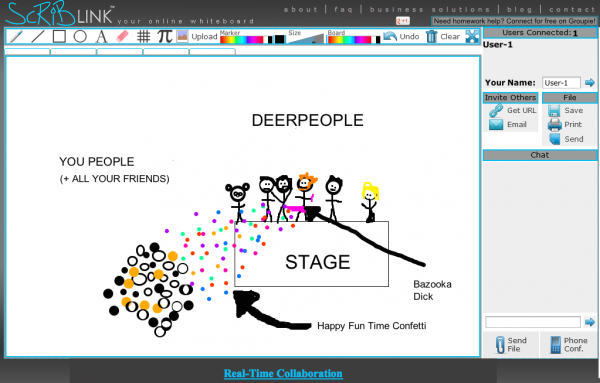 This is only a rough schematic, as I am up at the office yet the pen and tablet are at home, but it can be a reality!

OKC.NET:Â  Noted.Â  Alright, for the soon-to-be DEERPEOPLE listeners, list off the members of your band and a few adjectives and/or animals you feel best describe them.

Brennan Barnes: Julian is a panda. The rest of us are human. We were never given names.

OKC.NET: OR, you can watch this video that Doug Schwarz put together and I can just tell you who they are by order of appearance. Although clearly Julian is the panda, and a smart one at that since he brought a meat cleaver to dinner.

To the right of Julian Shen, aka Cleaver-Weilding-Panda, is flutist and back-up singer Kendall Looney. Next to her is guitarist Alex Larrea, next is drummer Jordan Bayhylle, then we have eccentric lead singer and keyboardist Brennan Barnes, and last is bassist Derek Moore. (Derek, for those of you who keep track of such things, plays in another band called Limber Limbs, which was formerly known as People, People. It got confusing hence the name change.)

Their collective biography states: “We simultaneously emerged from a sticky, moist womb and proceeded to rock.”

OKC.NET:Â  Were you all bored as hell while Julian was gone or did you have things to work on in the interim?

Brennan Barnes: We worked on writing, mainly. I knew before he left that I needed to have a full length record written by the time he got back. So not only did I have things to work on, I had the comfort of a deadline.

OKC.NET: What’s the story behind Impala Abdul and will you be playing it and other new songs at this show?

Brennan Barnes:Â Impala Abdul was one of the first songs for this new record. It really started with this campy (almost vaudeville) piano part, and somehow morphed into a punchy guitar/bass driven song with no piano at all. Funny how that happens. I’m sure we’ll play mostly new stuff, maybe some old ones. Haha, I guess those are really our only two options.

OKC.NET: Since we’re talking about new songs, what’s up with the new album: do you have a name for it, how close is it to being completed, and do you plan to tour when it is finished?

Brennan Barnes:Â  There’s not a name for it yet. We have a working title, but I’d rather not say. All the songs themselves are done, we’re currently trying to refine them. Play them live. You know, to get our parts all worked out as well as get some feedback from our friends. We ARE planning an extended tour for next Spring/Summer, but until then we have some little week-long tours here and there. Oh, and a lot of Oklahoma shows. I miss our OK shows.

OKC.NET: I noticed you had some videos come out this Summer too, especially the one for Walter Matthau, which seems a little Lord of the Flies-ish. Who’s idea was it to get all Fear Factor and devour them? (And tell me those things didn’t have their eyes still in them.)

Brennan Barnes: The Walter Matthau video was my original idea, because I like gross things, but between the rest of the band and Doug Schwarz we tweaked the look of it all. The single-camera, continuous shot, smoke, lights and all that stuff was Doug. I just liked the idea of eating gross stuff. And yes, the eyes were still there, but the eyelids were closed. So to access the eyeballs, you had to go in through the inside. I’ve been kind of bitter about this since then, they were supposed to have bottom jaws, tongues, brains, etc. but they didn’t. They were actually a lot closer to “food” than I had ever wanted.

OKC.NET: Randomly just for fun – if one of you won a million bajillion dollars, which band mate would be the most likely to take a portion of that and invest it back in the band for touring and studio time? Which one would be most likely to blow it all on coke whores, drunken bets placed in Vegas, bling, and a three year stint around the globe on a yacht?

Brennan Barnes: That’s a tricky question. I think Jules is most likely to do ANYTHING responsible. And on the other end, Jordan and I are the most likely to do anything irresponsible. But money changes people, or so I hear, so I don’t know. I think we could handle the first million bajillion with grace, it would be the second million bajillion that turned us into six Lindsay Lohans. 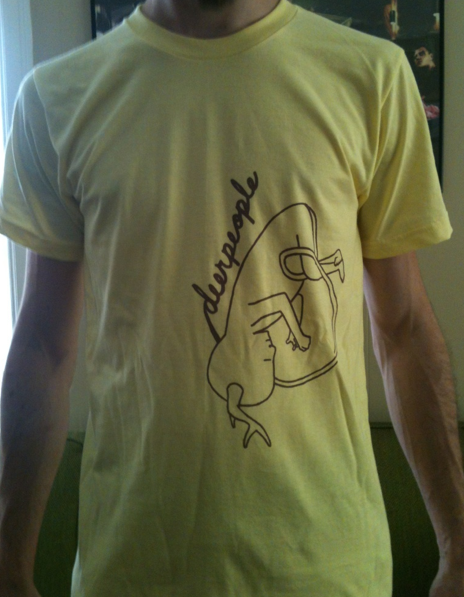 Just think: you will go to a show, get “Bazooka Dicked,” and after a time passes, THIS!