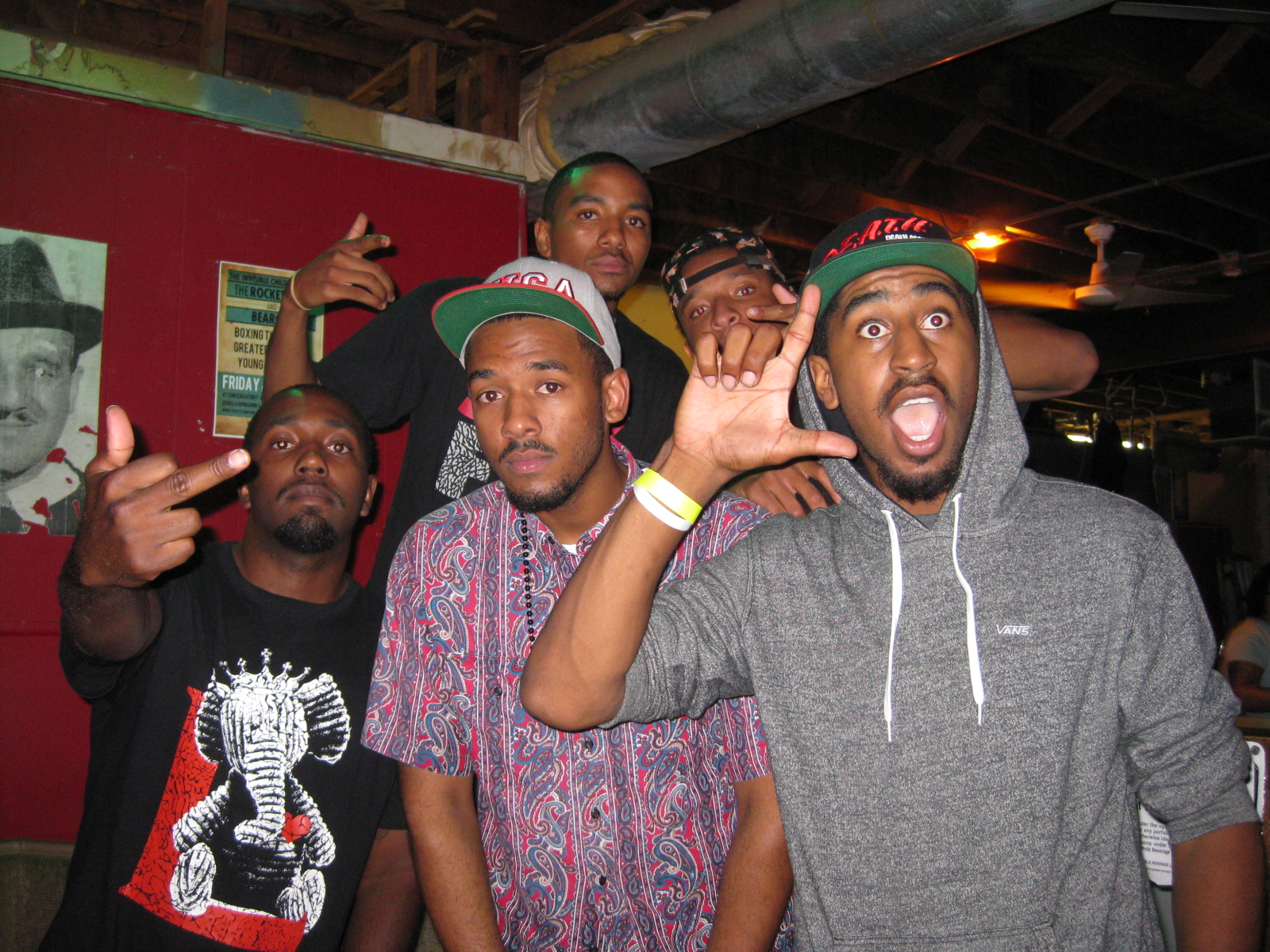 Members of GLC The Team at the Conservatory.

The Love Story Tour concert, hosted by Chris McCain, August 20th at The Conservatory was a really great show that got me to thinking harder about the nature of Oklahoma hip hop. Resista and Militant Mindz (members: Tyson K. and Dereck Cantu Methotrexate) kicked it off and made me nod my head. They are very passionate performers and their subject matter is engaging. This is the kind of hip hop I first learned to love, a la Talib Kweli and Lupe Fiasco. Maybe they would rather be compared to Dead Prez, but I find Militant Mindz so much less offensive. Resista performed a song featuring Original Flow and asked us “Whatchu stand for?â€ By way of letting us know exactly where they stand, they told us “fuck a deal, fuck the fame…rebel on the scene/this is all black everything,” which is a Lupe Fiasco allusion, and then “fuck your crew, get ready for some real shit.” I took the CD home that night and bumped it three times on repeat. Shoutout to the young and the conscious.

I was lucky enough to see GLC The Team for the second time. They are young, fresh, quirky and legitimately good. I like their one-liners, like “half of us are patriots, the other Tom Brady,” and the story about one rapper and his girl “on our way to an art museum…yeah, nigga, picture that.” What I appreciate about them is similar to my draw toward Beetyman: they drop random tidbits of insight in the middle of their fun semi-flighty songs. One second youâ€™re listening about any old Saturday night and then youâ€™re “picking up some poetry.” Another line they rapped went something like “stop hesitating/ make a move before your soul is levitating.” Then there are songs where they wax very political: “work a double shift and we still struggling…we just puppets in this government.” I guess this only suits me because I agree with them. They make me want to “stay fly like the right wing,” or like the left. GLC stands for â€œGood Life Coming.â€ While it comes, Iâ€™m wishing, begging, and yearning for something more, something more.

Beetyman and L.T.Z. hit the stage together next as a throwback to H.A.Y.B.I., the duo they used to be. Talking about how dope you are as a rapper gets really old; unless you really are dope. Beety says, “I’m on hooks like minnows is.” Truth. “I put my All in it like I’m washing clothes.” Truth. I appreciated hearing â€œCool Shitâ€ featuring Tom Tucker (of GLC The Team) again. It reminds me of what persistence will do for you. That and â€œTake It There.â€ The whole crowd was going crazy on this song. Everyone who has an art or a passion felt like we were on the brink of greatness in that moment. â€œO City, best believe.â€ And I donâ€™t know if it was my Screwdriver or the crowd of people from all different walks of life, but when L.T.Z. started going in, I felt like I had never heard half of his beats before. Everything was new to me in that moment, and brilliant! 360 Dunk, his last album (although thereâ€™s one on the way), proved itself to be a hit, again. â€œRadio Raheemâ€ always gets the crowd moving. â€œPep Rallyâ€ had us screaming â€œGo TeaZee go!â€ and we closed out “say[ing] a prayer in Jesus’ name” that we never have to “just picture me running drugs again/that’s a Instagram.”

The venue was jam-packed with artists and performances. Iâ€™ve got never-ending love for our locals, but this show wouldnâ€™t have happened if not for the out of state talent. Hollywood Floss from Houston did a short set, just two or three songs. Everyone rocked out to “She a dime piece/ I think I love her/ she a 10/finer than a motherfucker.” Hollywood jumped in the crowd to dance with the front row for “Line Me Up.” Before exiting the stage, he let us know: “OKC, I fucks with y’all,” and tossed some CDs into the crowd, one of which I took home. Later El Prez, from LA, â€œthe city of the fucking champs,â€ did another brief set, but the beats went hard. He had everybody on his â€œLdrsh!t,â€ jumping around and dancing at 1 a.m. instead of winding down. He wants to get so notorious he can “pop bottles on the White House lawn.” He was much anticipated due to his three tracks on the mixtape. I can definitely ride around talking about being â€œborn to lead so I donâ€™t never follow.â€

DJ Printz really got the crowd dancing with his mixes from Jay-Z, Kanye West, Lil Wayne and more, then he spun for Sean Falyon. Falyon is a Philadelphia native, but he made sure we could “tell them I be everywhere.” He called out the “cute” girls on the sideline, which I appreciated. If youâ€™re too cute to stand by the stage with everyone else, why are you here? Falyonâ€™s lines are a mix of knowledge, artistry, and misbehavior. He called it â€œprofanity with a purpose.â€ He impressed me with the track â€œMouthful of Lies,” which is about the music industry and their labels: “they hittinâ€™ me with that bullshit/I pay them niggas no mind/They got a fistful of dollars and a mouthful of lies.” Shoutout to all of the independent artists out there. I was reminded of Lupe Fiascoâ€™s â€œDumb It Downâ€ and â€œState Run Radio.â€ But I have to say, sorry Sean, I’m not “givinâ€™ up that pussy for dinero.” He seemed to really relate to the guys in the audience, mostly other rappers, with the songs â€œFuck Being Humbleâ€ and â€œAll My Damn Life.â€ Beyond the music, Falyon is a cool dude who hung out with several people after the show and even went to BoBoâ€™s.

Raven Sorvino, â€œa country girl from Texas,â€ was up next. Admittedly, I was nervous about the female rapper. Nicki Minaj is our only current hip hop femme, and Iâ€™ve been praying for more ever since she came out. Not that I donâ€™t like her, I just donâ€™t understand why it seems like dudes are the only ones with bars. She performed â€œGold Chainzâ€ from the mixtape and then freestyled: “it’s my life, I’m gonâ€™ make it how I wanna/ fuck your feelings.” It was dope. I like her swag a lot. She can definitely hang with the dudes. She sometimes raps like one of them too, caring primarily about “music, money, clothes, sex” and taking us to “Fantasy Island” where sheâ€™s the “icing on the cake/ put me on the centerfold/ I’ll be your playmate.” I was surprised to hear that this was her first tour. Her set was short but well done and people were into it. I hope she blows up.

Jabee got in there with DJ Paula on the turntables (or computer). Iâ€™m proud of him for getting on a bit with this tour. Oklahomaâ€™s scene owes him some of its visibility, I think. And he raps a lot of what I can stand behind artistically. “Truth is in the life if you livinâ€™ it right/ proof is in the struggle if you winninâ€™ the fight,” he says. He performed â€œBeautiful Dayâ€ from the mixtape and â€œTeach Me How to Fly.â€ With â€œSuper Uglyâ€ Jabee said, “I made a vow: never end up like these rappinâ€™ cats.” And he ended his set as usual with â€œNobodyâ€ about how you can only depend on yourself and only you can make progress for yourself. He does it mostly acapella and most of the crowd knows it well. Itâ€™s interesting how we all can connect around a song about singularity and self-reliance.

Last and most importantly â€“ because thatâ€™s how it works in music â€“ was Shawn Chrystopher. He came in and let everyone know who he was and what he was about. I typically prefer the underdogs to the high-handed bosses, but he was hard to argue with. “You in the game to get famous/I’m in the game to get rich/I fucked around and did both/now you feeling like a bitch,” he said. And if itâ€™s true then we can all have a seat. He did all the songs from the mixtape. I really like â€œSituationsâ€ and â€œOne of My Homies.â€ He says, “the key to life is working harder than your situations,” and I think heâ€™s right. The dude has a great stage presence. I wanted to like him really bad. If every one of his songs was like “One of My Homies,” I would be a fan. He tells several stories in it, including: “one of my homies just fucked a bitch he knew I was fucking/one of my homies found out/none of my homies said nothing” even I can feel that. That’s real life. Betrayal hurts. My official opinion is that you will love Shawn Chrystopher if you are not as conservative as I am. He just talked about marijuana too much for me.

This show made me acknowledge all the lenses that I view rap through. I see it in light of my own morals and lifestyle. Thatâ€™s why I am moved by TeaZeeâ€™s song about not having to worry if he dies â€œbecause I already know that my life is right with Godâ€ and Jabeeâ€™s line “if God donâ€™t like ugly/ He ain’t fond of beautiful either.” Thatâ€™s why promiscuity and intoxicants donâ€™t have to be part of the deal for me. But Brenda LaFressh (Shannon Moham) made a good point to me just the other day: â€œthere’s room for everything in hip hop.â€ Thatâ€™s why we love it.

I must point out, though, that lately Iâ€™ve realized my love is localized, and I rep Oklahoma City as hard if not harder than I rep rap. This is my third reference to Lupe Fiasco in here, and I loved all his music up through Lasers, but at the end of the day, Iâ€™ve never been to his shows and he has no idea that O Cityâ€™s about to take it there. Everyone has his frame of reference, but with everything out there, I find it useful to be selective. I love the message in Jabeeâ€™s â€œDecencyâ€ because he calls out to the game players, the game makers, and the game changers. All he asks for is â€œa little decency, a little substanceâ€ and he acknowledges some refuse to do that â€œwe got a long way to go when youâ€™re tryna reach stars.â€ When he says, â€œmy homegirlâ€™s sick/got cancer in her body and sheâ€™s fighting just to live,â€ heâ€™s talking about my friend who died without ever hearing her shoutout. So Iâ€™m proud that our artists make friends with other artists and convince them to play our town. We get exposure to so many things that we never would have. When people like Kendrick Lamar get more and more famous, we get to say, â€œI was there when he played Kamps.â€ But, that night when Shawn Chrystopher was rapping “I know it’s hard to grow when your city hating,” I was thinking I don’t feel like we really have that problem around here. I like his message, but that might be a West coast thing. The O City I know shows love. While the world is following the rise of these guys â€“ and girls! â€“ around the country, Iâ€™m shouting my friendsâ€™ lines like â€œI gotta put my city on my backâ€ (Beetyman). I know Iâ€™m biased. All I care about is progress and the city that Iâ€™m from.

See more photos from the show on our Flickr.