Ph.D. Entertainment started Sunset Sundays in 2009 with a vision for Oklahoma Cityâ€™s urban culture. Quintin Hughes and his friends had a love for live music and neo soul, for upscale event venues and more mature fashion trends. After observing what the young, diverse, and educated were doing for fun in cities like Houston, they were ready to get started. With the summertime on, Oklahoma heat brewing outside, and school out until late August, Ph.D. Entertainment decided to showcase a different kind of event. â€œWe saw a need for events in general for people who are African American or just diverse; an atmosphere conducive to middle class or upper middle class,â€ Hughes said. â€œThere’s not necessarily a lot to do for them to do together.â€ So Sunset Sundays was born, originally 8p.m. to midnight at Paralogia in Bricktown. 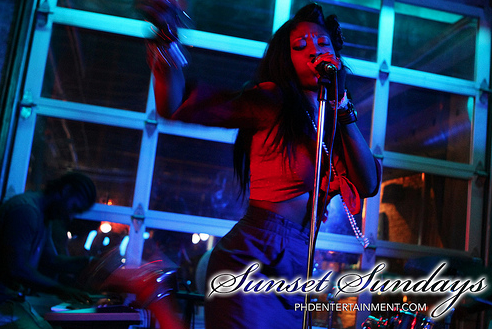 This photo is from the “Sunset Sundays 07-24-2011 Reggaefest After Party,” to see more examples of the kinds of events they do visit: http://www.phdentertainment.com.

They ensured the success of these gatherings by hosting it on Sundays when they wouldnâ€™t have to compete with other events, enforcing their dress code (no shorts, tennis shoes, or ball caps), and promoting their artists well. They have, however, experienced a few bumps in the road. Their venue, Paralogia, used to be located on the Bricktown Canal at Reno Ave and Oklahoma Ave, under the current Centennial condos and Bolero. The owners were bought out of that location (and now own The Office) partially because the noise from events like Sunset Sundays had bothered their upstairs neighbors. Hughes said they then tried out Pepperoni Grill in Penn Square Mall and Bourbon Street CafÃ© in Bricktown, neither of which were ideal. The pattern has become a change of venue every season. So their patrons came to Sapphire Lounge in 2011. Hughes said it has been the most perfect location because of the intimate setting. The group is currently set up at Purple Martini, 315 E. Sheridan and they are trying to draw a larger crowd in order to fill up the much bigger space.

While Sunset Sundays routinely attract â€œa ton of beautiful women,â€ there have generally only been â€œa few fellas,â€ said Hughes. There are plenty of chic, intellectual, artsy ladies around, but Hughes thinks the culture of Oklahoma City hasnâ€™t reached a point where men value styling. Hughes admitted that it might be easier to fill the venue and make a bigger profit by relaxing the dress code, but it would diminish the vision of the event and dissatisfy their patrons. â€œWe try to focus on the experience,â€ Hughes said, and that includes the aesthetics of well-dressed people.

I attended Sunset Sundays for the first time two weeks ago when Spence Browne performed with the house band Superfriends. The entertainment was great and the drinks strong. There were a few lively women really enjoying themselves, dancing and sitting up front, and it seemed to pick up a bit more as I was leaving just before midnight. I am excited to go back this week for the â€œSheek to Geek 2.0 Labor Day Edition.â€ Hughes said they chose the theme for the second year to allow people to go all out and have all their geek style and chic style. Branjae and Austyn King from Tulsa will be gracing the stage with DJ Music Man and Superfriends. Ph.D. Entertainment has been hosting a â€œName That Geekâ€ Contest on Facebook and Twitter (@phdent) for free entry. Otherwise thereâ€™s a $10 cover charge after 11 p.m.

Sheek to Geek and back again.

Check out Ph.D. Entertainment Facebook’s page to keep up-to-date on their events and play “Name that Geek,” or follow their updates on Twitter.