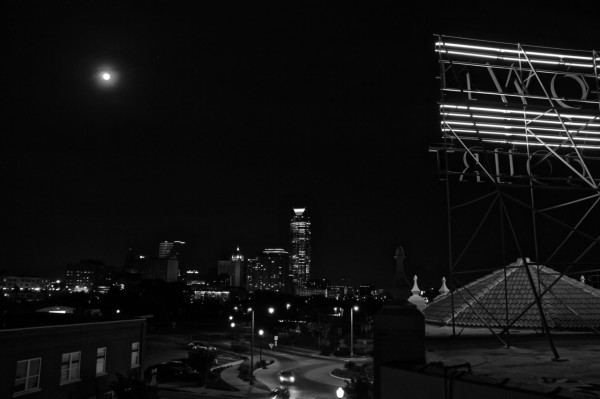 OKC is now in the (inter)national spotlight. The NBA finals are the largest sporting event ever to be held in Oklahoma City. It’s a big deal, any way you look at it.

Some people are probably going to be mad at me for asking this question. Local is a sort of pseudoÂ  cult around here, especially among the 20-something cohort who have worked so hard to make this city what is is now. I’m not doubting them or their effort. That being said, is what we have accomplished to this point enough?

I fear that we may have crossed a crucial threshold, from being a place where people arrive with low expectations and leave wowed, to a place where people arrive with high expectations and leave disappointed. It’s the difference between being the best city in the minor leagues and the worst city in the majors. If we want all the things that we think we have earned- respect, self-regard, a good economy, the nebulous “creative class”- we need to quit trying to have it both ways and commit to the changes that are necessary to make it happen.

If I learned anything in my years as a history major, it’s that structural change leads to social change, not the other way around. Our last major structural change happened in the late 1980s, when the energy industry imploded and we were forced to diversify our economy. Many of the changes we have seen in our lifetimes date their genesis to this time. I remember when Bricktown was Ghosttown, when the river had to be mowed, when the mayor wouldn’t let gay people sponsor light pole banners. This wasn’t that long ago. The MAPS projects did something very important: They told us that change was possible, that we weren’t Amarillo (apologies to the two dudes there who are reading this) and that we thought bigger, better things were possible.

Even so, the same things that were structural impediments 20 years ago are largely still in place; the “good old boy” network that looks at newcomers as a threat, a deeply conservative political culture that stifles and snuffs out innovation and diversity of opinion, the resigned and insulated “progressives” who don’t really care what happens around the corner, so long as they can still get Sunday delivery of the New York Times, and the bureaucratic class at and around the Capitol, which mostly looks out for its own interests. We have a habit, as a city and a state, of taking the safe, pragmatic approach. This is a common Midwestern trait, but we are not living in safe, pragmatic times. Bold action is necessary to bring us from “pretty good” to “great”, and we owe it to ourselves to make that happen in our lifetimes.

I love OKC. I love my little community of freaks and weirdos, I love my passionate writers and editors, I love that we are one of the places in the USA that is on the upswing, not the downswing. I think we have great things in our past, present, and future. That being said, if someone told me that they wanted to move to Austin, I wouldn’t be able to argue with them that much. It’s easier there. I get it.

Our foibles and failings are detailed elsewhere; I won’t get into them here. What I want to focus on, what we Oklahomans have always looked to, is the future.

Here’s the article that inspired this piece; actually, The actual piece is kinda vapid- the haters in the comments section inspired this. I think they are mostly wrong; OKC is more progressive than it is retrograde, at least the part that matters, the part that anyone who doesn’t live here would think of as OKC proper. We have forward momentum, and we are getting better every day. A more insightful commentary is here, from a Spurs fan who travelled here for the western conference finals. The money quote:

“Oklahoma City has all the right building blocks to become one of those “Best Places to Live in America” cities. People also seem to legitimately like living in Oklahoma City. There isn’t a feeling of “I want to get out of here.” Maybe it’s an awesome place to live, or maybe they just don’t want to miss out on the construction of a dynasty, which is the best reason to live anywhere.

Oklahoma City is hoping to ride the Thunder into a new decade of prosperity and development. The city seems destined to be overpopulated with ‘trying too hard to look urban’ new developments surrounding their downtown, just like in Austin, Texas. The personal culture is a more tolerable version of Dallas. It will be interesting to look at the city when Kevin Durant retires and there’s a pretty definitive model on the impact of a Hall of Fame player on the economic development of a ‘small market’ city.”

As much as it pains me to hear that we have anything in common with Dallas, this is a pretty fair assessment of where we are right now in our development. I think we can do better.

Here are some things that most Great Cities have that we don’t. Please get on these immediately, OKC.

-Reliable, affordable public transit. I rode the bus for a year when I was blind (double cornea replacement! Thanks, government insurance!) and the damn thing is slow. We need either rail transit or dedicated bus lanes. Make up your mind and make it happen.

Retail downtown. BC Clark and Guestroom are good starts, but I really wish someone had somehow talked that outlet mall into locating within walking distance of Downtown instead. Also, we need at least one grocery store there if it’s ever going to be a sustainable urban neighborhood. Most visitors to OKC will never leave downtown. Think about that for a minute.

-Representation. James Lankford is an idiot. I’m sorry, he is. Quit caring more about the next show at The Conservatory than who represents you in congress, register and fucking vote this guy out.

-Less back-biting and drama in the music/art/media/general creative “scenes”. We are all on the same side, we are all working to make this a better place to live. Quit it with the jealousy and the angst and the gossip. I don’t want to hear it.

That being said, OKC is on the right track. I love the 405, and I will stay and fight for this place. I hope you will too.

Oklahoma City can be all the things we hope it to be, but it won’t be easy. We have to get over some of the obstacles that have held us back, we have to have faith, we have to stay and work.

The world is full of haters; ignore them, do your thing.