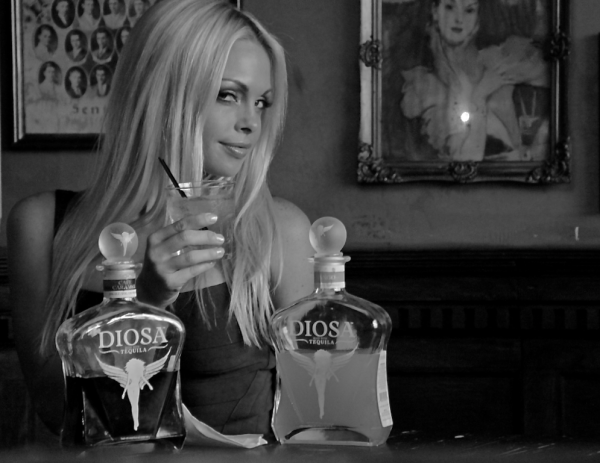 Pull up a chair and try some tequila.

We sat down with her recently to discuss the newest addition to her extensive resume, a designer tequila called Diosa. Jane said her friends urged her to make a sex-themed drink, but that she decided not to do so because she knew those drinks weren’t really profitable. Another formerly disreputable industry experiencing a boom in mainstream respect, tequila seems like a good fit for an entrepreneurial minded adult film actress.

Our staff had never tried flavored tequila before; flavored tequilas have only existed since 2004, so we were slightly wary upon first glance. Given how well tequila mixes, as testified to by the millions of drinks with the suffix â€œritaâ€, we needn’t have worried. The sweetness of the flavored tequilas – especially the excellent almond and mango flavors – takes the edge off and complements the agave flavor nicely, while the silver 100% Blue Agave Diosa is sweet, smooth, and packs a hell of a kick, not unlike it’s high profile sponsor. It would be nice to see a Reposado or Anejo in the future, but this is a brand new operation.

Jesse Jane is not the first adult film star to dabble in the world of liquor, witness designer rum label Ron de Jeremy – yes that’s a real thing, but she is unique in that she is a co-owner of the brand and helped to develop it rather than simply licensing her image to outside producers. It’s a savvy move, positioning herself to reap any potential financial windfall from the brand. In some ways the most striking thing about Jesse Jane is that she is, first and foremost, a clever businesswoman, not at all out of place in suburban OKC. She was solidly on message through the entire interview- the mark of a true pro- and the way that she has built her personal brand over the past decade would earn her high marks in any MBA program.

Diosa may or may not conquer the already competitive world of designer tequila, but I wouldn’t bet against it. After all, if Sammy Hagar can do it…