Ahhhh, the cupcake. Â Is there anything better in the dessert realm than a delicious cake in miniature? Â I think not.Â  And millions of other must agree given the popularity of T.V. shows like “Cupcake Wars” and “D.C. Cupcakes.” Feeding this trend are all the specialty bakeries that have popped up in cities throughout America.

There are several of these specialty bakeries here in the Oklahoma City Metro, and today I am reviewing three: Cuppies and Joe, Green Goodies by Tiffany and Sara Sara Cupcakes.Â  The only requirement for this assignment is that each establishment had to be locally owned and operated, so no chains (sorry, GiGi’s!). Â I embarked on my culinary adventure this past Saturday and brought along my husband, Jake, as a neutral second opinion. Â Jake isn’t that into sweets. I knew if he liked the cupcake then it had to be good.

Our adventure started at Cuppies and Joe on N.W. 23rd Street at 10 am. Â When we arrived there was already a small line. People seemed perfectly at ease in the cozy atmosphere as they enjoyed their coffees and desserts.Â  We were ready to place our order, but were informed that today’s cupcakes wouldn’t be ready for another thirty minutes. But all was not lost. Cuppies and Joe said they had leftovers from yesterday, along with some fresh cranberry-poppy seed cupcakes that were also available. Â Rather than wait, I opted for the cranberry-poppy seed (the Return to Oz), and Jake ordered the carrot cake cupcake (the Horsebite). Â I had already drank a cup of coffee at home, so I only ordered a bottled water to cleanse my pallet.Â  Jake had complained about the cost per cupcake, which is about $2.50. But then he took his first bite.

His reaction: “Nevermind, this is GOOD.”

Not only was Jake’s cupcake incredibly fresh and moist, despite being a day old, but you could actually see the freshly-ground carrot in the cake itself. Â I took my first bite of the Return to Oz cake and instantly was hit with a tangy-sweet burst of fresh cranberries. Â The almond glaze had a hint of lemony zest, which perfectly complimented the fruit in the cake. Â My cake was also fresh, moist, and delicious. Â I’ve had their Bangarang (chocolate cake with mocha icing) at a LIVE! On the Plaza event, and even then I enjoyed the dessert tremendously, especially the icing. I could live on that icing alone, it is that good. 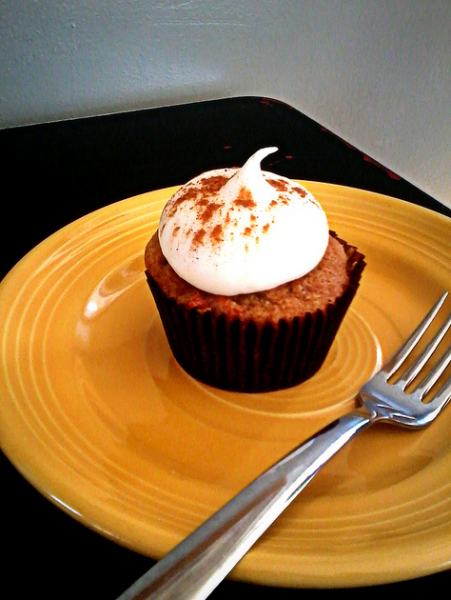 Horsebite cupcake from Cuppies and Joe. Photo by Natalee Dobbs.

Cuppies and Joe is open 8am – 10pm Tuesday – Saturday. Â You can find more information, including their menu on their website, or follow them on Twitter.

The next stop was Green Goodies by Tiffany, located in the Classen Curve shopping center.Â  Because it is a corner store with large glass windows, there is a lot of light that illuminates the white and pink decor within. Â Green Goodies promotes itself as offering the finest organic, gluten-free, and vegan desserts. They also offer frozen yogurt with a dairy-free option. Â The offerings here were so diverse and enticing, I had a hard time making a selection. Â I eventually chose the Sopapilla Cheesecake cupcake and Jake chose the Banana Pudding cupcake. He also ordered a dish of swirled frozen yogurt that combined dark chocolate and salted caramel. Â Green Goodies goes the extra mile in the presentation of their cupcakes. Jake’s cupcake was topped with aÂ miniature vanilla wafer, while mine had been topped with honey drizzle and cinnamon-sugar dust. Â Like Cuppies and Joe, our cakes here were extremely fresh, moist, and super tasty. Â I was amazed that so much flavor was packed into such a small cake. Â The cinnamon in my cake was not overwhelming, and Jake’s cake had visibly fresh banana slices in it too.Â  He also enjoyed Green Goodies fro-yo, but is still partial to Orange Leaf when it comes to frozen yogurt. Â I had heard good things about Green Goodies from friends, so I’m glad we decided to finally try it. 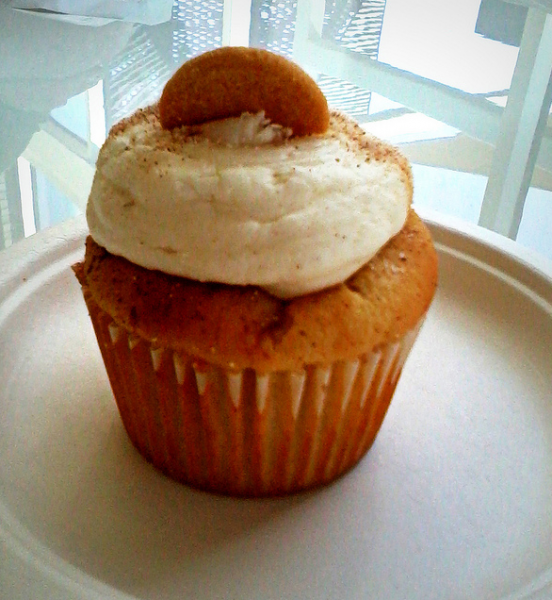 Green Goodies by Tiffany is open Monday – Thursday 10am – 8pm and Friday – Saturday 10am – 9pm. Â You can find their menu and catering options at their website, receive daily updates (including the latest daily specials) on their Facebook page, or follow them on Twitter.

The final bakery on our agenda was Sara Sara Cupcakes. They are located on N.W. 9th Street in Automobile Alley, next to the Iguana Grill and the WOMB gallery. Â I’ve had goodies from Sara Sara back when I was an office drone downtown. But this time I wanted to deviate from my usual go-to, which is their strawberry cupcake.Â  So for this trip I chose the Pineapple Upside-Down cupcake and Jake chose the Elton John, which was described as a “cherry cheesecake-type” of cupcake. Â We also decided to take advantage of Sara Sara‘s milk bar. I got a chocolate milk and Jake had the strawberry milk. Â I always love coming to Sara Sara. The white interior brings light into the space and it is quite chic in a stark sort of way.Â  The offerings at Sara Sara are much bigger (almost 2 times as large) as the previous cupcakes we consumed. A fork is definitely needed; unless you can unhinge your jaw like a snake. Â While both of our cupcakes were quite moist, the texture of Jake’s cupcake was extremely dense. I found the flavor of my Pineapple Upside-Down cupcake somewhat lacking. Â The icing on my cupcake was almost too sweet, and it overwhelmed the caramelized pineapple ring. Â Jake enjoyed the flavor of his cupcake, but could only get through half as the texture was very rich. Â We both enjoyed the flavored milk, especially as it was served in frosted glasses. Â Even though this visit was a slight disappointment, I would still recommend Sara Sara to friends. Â The strawberry cupcake is a regular favorite and I can’t get enough of their seasonal pumpkin cupcakes with cream cheese frosting, so I’ll definitely be back again. 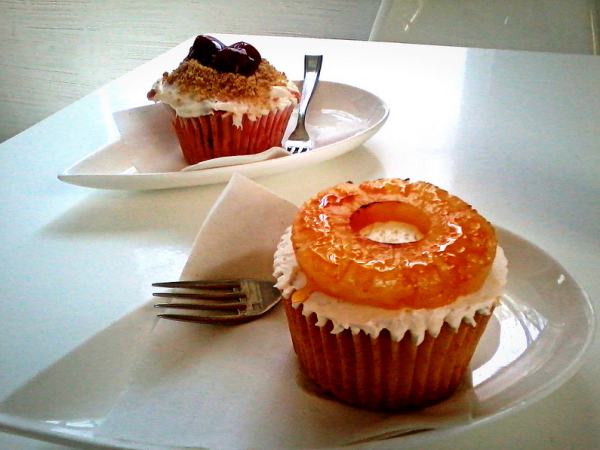 Sara Sara cupcakes is open Monday – Friday 7:30am – 9pm, Saturday 9am – 9pm, and Sunday 11am – 6pm. Â You can find menu and catering information on their website and updates on daily specials on their Facebook page.