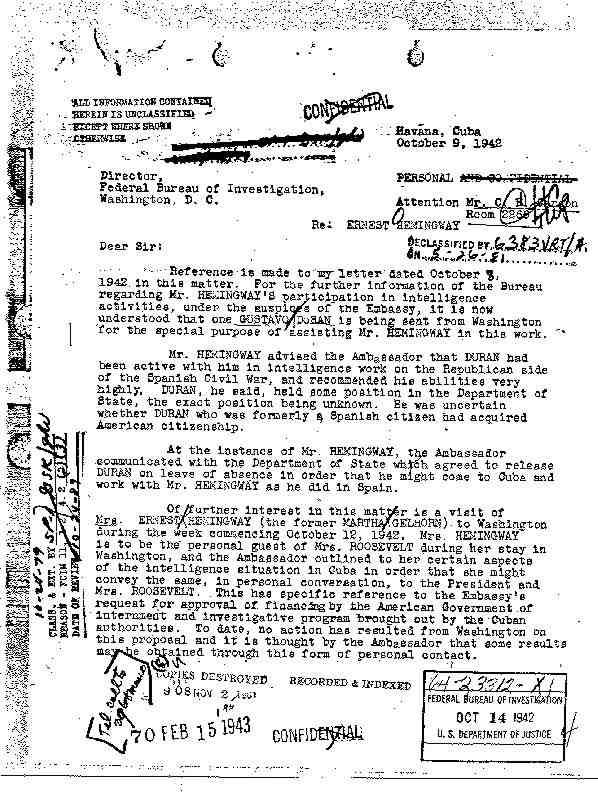 Much has been written about the FBI’s COINTELPRO operations; the cold war era domestic spying operation that tracked civil rights workers, leftists, and other â€œsubversivesâ€. Less well known is the widespread surveillance of artists and writers of the same era. Allen Ginsburg, James Baldwin, John Stienbeck, Arthur Miller…practically everyone you have ever heard of from the 1950s and 1960s had a file a mile thick.

In this daring work, Herbert Mitgang criticizes the FBI for the dossiers that have been created and kept on some of the worldâ€™s most revered authors. Mitgang uses his platform to address the corrupt tactics utilized by the FBI and other government agencies to track novelists, playwrights, poets, and artists that were deemed subversive by J. Edgar Hoover. Mitgang isn’t interested only in the injustice of a government keeping tabs on it’s most prominent cultural figures; emphasis is also placed on the extraordinary waste of time and money by the government as they perused these baseless investigations.

Years of research went into this text, and Mitgangâ€™s findings are chilling. The book is flooded with information regarding the contents of the dossiers and their emphasis on the authorsâ€™ possible â€œUn-Americanâ€ associations. Although the prose can be a bit dry, it’s revelatory to see what the FBI found to be most interesting in the backgrounds of these artists. Specifically, Mitgang demonstrates the FBIâ€™s focus, not on the authorsâ€™ actual content or writings, but on the audience those writings garnered. Mitgang argues that flawed motives and sloppy research were endemic to the entire enterprise.

The tone of Mitgang’s book is wildly suffused with outrage and anger; this is an unabashedly and unashamedly biased work. This makes makes the book simultaneously more readable and less scholarly. A more straightforward â€œjust the factsâ€ book could be written on this subject, but would anyone care?

Mitgangâ€™s emotional stance works to humanize those being profiled and demonstrate the violations being incurred by them. In unveiling page after page of documents that are still heavily censored, Mitgang exposes readers to a reality where the ability to voice an opinion, even if that opinion is in agreement with government actions, puts one at odds with their own government. John Steinbeckâ€™s file grew after his work The Moon Is Down was included on a reading list for a group associated with Communist activity. The work is about defying Fascism and Nazi-occupation, yet the government found Steinbeck suspect for this piece at a time when they were participating in a war against the Nazis. The irony of the story is not lost on Mitgang, and he uses pieces like this to bring touches of humor into his research.

While Mitgang’s point seems to be that the government is able to stifle creativity with heavy handed policing, he is more successful at demonstrating the way in which the actions taken against writers were not only harmful, but hugely wasteful. At a time when a war was raging overseas, the American government spent unimaginable amounts of time and money focused on writers and what influence they may have. Resources were invested into people that were never arrested, tried, or convicted for their â€œUn-Americanâ€ ways. These are the ideas that Mitgang becomes obsessed with in this work, and which he allows readers to become obsessed with as well.