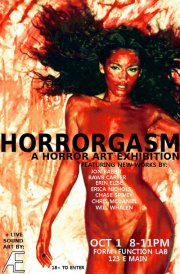 Ghosts, he half thought; these are ghosts. I’m spying on the past, being re-run in front of me. The thought propelled him from hiding. If his assumption was correct then they might vanish at any moment and he wanted to drink their glory down in gulps before they did.

Thanks to Erin Elise and eight other artists, Halloween is starting early in Norman this year. That’s because they are collectively putting on “Horrorgasm”, a horror-themed art exhibition at the Form and Function Lab, a small art studio located above McNellie’s Pub and Forward Foods on Main Street in Norman.

The show mainly consists of art Elise and the other artists, including Chase Spivey, Chris McDaniel, Erica Nichols, and Jon Babbit, did not feel comfortable displaying in “mainstream” galleries, especially considering the generally conservative cultural climate of Oklahoma City. As the name suggests, the art show will not only display art depicting horror tropes and scenes; some of the pieces with also have an erotic or sexual flavor. With a mischievous glint in her eye, Elise described one of her pieces to me involving something known as “vagina dentata”. Go ahead, google it. I’ll wait. Back? That should give you a pretty good idea of whether or not you’ll be interested in attending Horrorgasm.

But even if there weren’t going to be paintings of genitals with teeth or eviscerated organs, Horrorgasm sounds like a great way to spend your Saturday night. “[Horrorgasm] will be a more organic art experience than seeing paintings hanging on white walls in a stuffy gallery,” Elise says about Saturday. “We want it to have a haunted house vibe.” There will be live ambient music the entire night, along with a bathtub full of beer and glowsticks to take advantage of the low-light atmosphere of the show. Additionally, there will be an antique bed that will be turned into an altar, as though there will be supplicants to some obscure Lovecraftian deity in attendance. All these add extra ambience to the affair that is sure to please fans of the horror subculture. Anyone who’s a fan of horror novels or cinema will find something to enjoy here; Elise and her comrades would be sure to enjoy discussing horror movies just as much as their art (her favorite recent horror films are “Ginger Snaps” and “The Orphanage”). Fans of David Cronenberg’s early films such as “Videodrome” may find themselves simultaneously delighted and disgusted by works emulating the look, feel, and texture of flayed skin.

Horrorgasm will be held in Norman at the Form and Function Lab in Norman on Saturday October 1st. It begins at 8 p.m. and lasts until 11 p.m. It should perhaps be said that Horrorgasm will not be for everyone, but those of us who did not find it necessary to google vagina dentata are quivering with anticipation.

One comment to “Horrorgasm: Pain, Pleasure, and Decadence in the Heart of Norman”