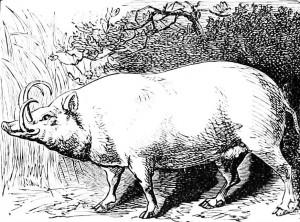 EDMOND, Oklahoma: In a recent appearance, Labor Commissioner Mark Costello, who was elected to protect all workers in Oklahoma, used disparaging language to describe state workers, including teachers.

In his comments, published in the Tulsa World, Costello compared state workers to â€œferal hogs.â€ Stating, â€œ’I don’t know if you know much about feral hogs, but they reproduce three or four times a year, they eat anything and everything, and I kind of think there is some comparison between bureaucrats and feral hogs.’â€Â  He clarified his remarks in an interview with the Oklahoma City Fox television affiliate.

â€œWe expect our Labor Commissioner to be professional and to act as a guardian for all workers in Oklahoma, not for just those who line his pockets and agree with his unorthodox and insulting views,â€ stated Brennan Society Justice Tom Guild. Guild continued, â€œCostelloâ€™s anti-worker and anti-public school teacher comments are similar to those of Representative Sally Kern who made disparaging comments directed at blacks, women and gays. They are unacceptable and a throwback to past centuries and are not an accurate reflection of the diversity and progressive nature of our state.Â  These types of comments have a chilling effect on diverse and talented groups of people who are badly needed to help build our state, and discourage them from settling or remaining in Oklahoma.â€

â€œCommissioner Costelloâ€™s statements are stigmatizing and counterproductive to the growth and development of our state and they confirm either that he is out of touch with the people of Oklahoma, or that he is posturing his new nonprofit Parity for Oklahoma which opposes collective bargaining. Whatever the case, Oklahoma deserves better,â€ stated Brennan Society Justice Ismat Esrar.

â€œCommissioner Costello is an elected public servant and his personal agenda should not come into play during his term of office. We believe his new non-profit, and his recent language during his event are inappropriate and we ask him to stay impartial during his tenure,â€ Esrar concluded.

The Brennan Society is a progressive group that strives to build a more compassionate, community driven and competent government in Oklahoma. Visit our website for more information: www.brennansociety.com