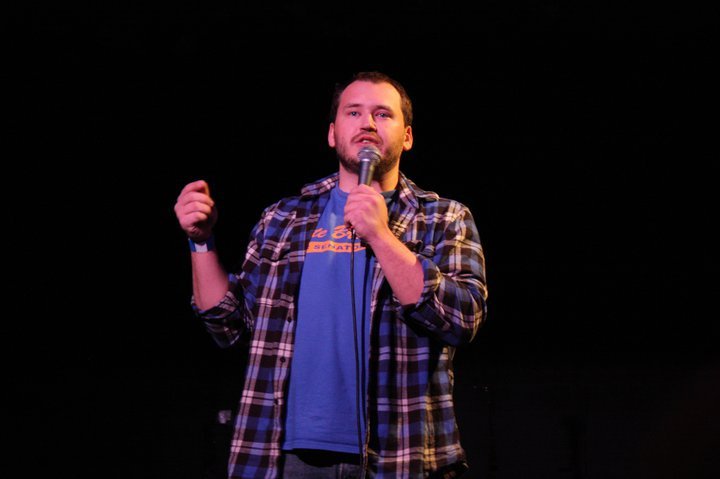 Local funnyman, Zach Smith, has been tearing up the scene lately. I’m still giggling over this one-liner: “Going house to house to tell people you are not a sex offender is just as creepy as telling them you are one.”

This young comedian (who will try to convince you while on stage that he looks much, much older. He does.) recently opened and MC’d for Maria Bamford. The fact that Zach is an up-and-coming comedian in Oklahoma, and the fact that his hard work with other local comedians is bringing in talent like Maria Bamford might tell you something about the burdgeoning comedy scene here today.

Catch Zach at the Tulsa Loony Bin Sept 7 through the 11th. He also has a show at UCO on Sept 26 with Spencer Hicks and other comedians!

Tell us a joke. Just kidding. Tell us about your very complex joke-writing process.

A priest, rabbi and redneck all walk into a bar, because we live in a society that allows people to get past their preconceived notions. Well, I started just doing one-liner jokes that would pop in my head, but Iâ€™ve started moving towards more storytelling and trying to fine tune that which is incredibly more difficult. My main writing process is just practicing new material on stage and seeing what works and what doesnâ€™tâ€¦most of it doesnâ€™t.

Howâ€™d you get started in comedy? How are you finding the Oklahoma comedy scene?

I started doing comedy when I was going through a pretty hard time in my life. I had a ton of bad personal issues. One night I just decided to head up to The Loony Bin in OKC and give it a try and have never stopped since. I love the OKC Comedy scene. We are all working towards something amazing and putting ourselves on the map. People like BradChad Porter, Dan Skaggs and James Nghiem are working tirelessly to make this city great and they are succeeding. I was never more proud than when I got to open for Maria Bamford and it wouldnâ€™t have happened without those guys.

James Nghiem and James Draper are my two favorites for sure. Dan Skaggs, Spencer Hicks and BradChad Porter. I know it makes six but Jeramy Westbrook is new on the scene and is tearing it up. He has amazing potential.

Bob Newhart is hands down my favorite of all time. Louie C.K., Patton Oswalt, Jon Wurster and Steven Wright.

Waiting for Guffman, Rushmore, The Devil and Daniel Johnston, The Burbs and A Mighty Wind.

Ween, Fleet Foxes, The National, The Pixies and Lemon Jelly.

Cousins Bar and Grill. Itâ€™s where my jokes come from.

What projects are you working on right now?

Iâ€™m in the beginning stages of working on a web series with James Draper called â€œQuit it, James!â€ I will also be working on more video sketches with James Nghiem. Iâ€™m running a comedy show at Belle Isle Brewery in OKC starting in mid-September.