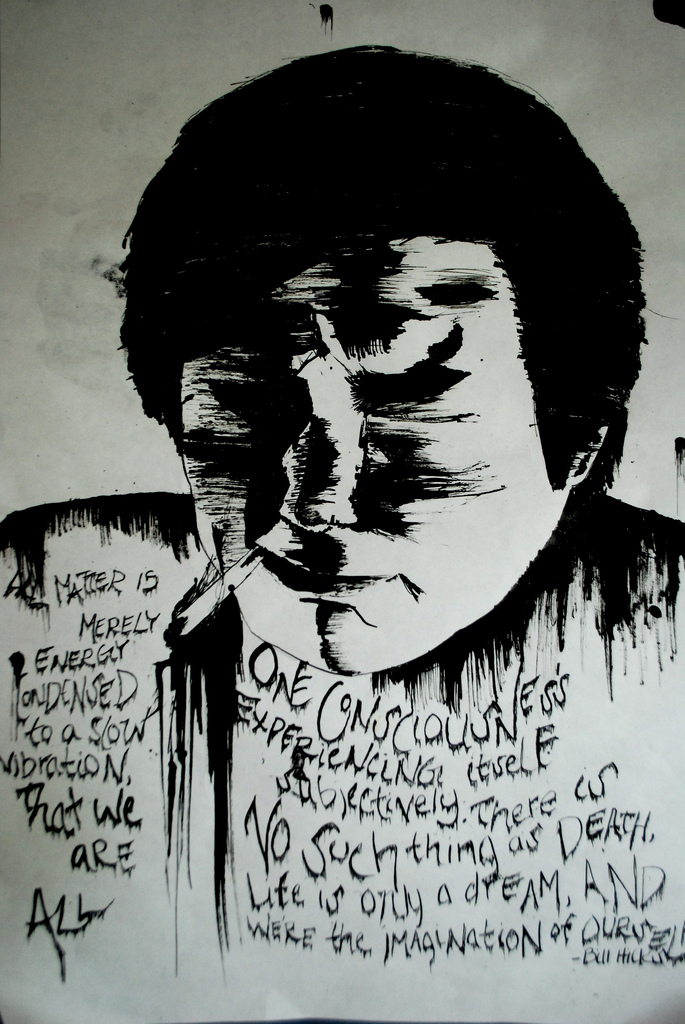 Daniel Johnston and Bill Hicks are two of the most enduring cult figures of the past three decades. Both are widely acclaimed as geniuses, both have small armies of devoted fans, and most Americans have never heard of either of them. These two excellent documentaries make the case for why more people should know about these two remarkable artists, while also revealing why more people don’t.

Bill Hicks is perhaps the most acerbic, insightful social critic that Americans have consistently ignored. Hicks began doing stand-up comedy as a teenager in the Houston scene of the 1970s and 1980s, where he made a reputation as a quick and talented comic. Most of his material was nothing groundbreaking; suburban slice of life vignettes, spiked with the occasional gentle social commentary. As the 80s dragged on, Hicks began to abuse alcohol and drugs more heavily and became, as a friend says in the film “just a drunk on stage”.

I’ve always had a problem with bio pics that end with the subject’s sobriety. The recent films about Ray Charles and Johhny Cash are notable examples; it makes a convenient story arc, but both artists did their best work after they got clean, not before. The same is true of Bill Hicks, who emerged from addiction not simply as a better comedian, but a completely different kind of comedian.

If you have never seen Bill Hicks perform, I recommend you pop open your netflix account and rent Sane Man, a concert performance from his late 1980s/early 1990s peak. Hicks once described his brand of comedy as “Chomsky with dick jokes”, and indeed his incisive demolition of consumerism, advertising, banality, and ignorance covered territory rarely touched by comics before or since, especially in the comedy boom days, when the holy grail was a perfect “5 clean minutes for Carson”. Predictably, Hicks never made it big in America, seeing wide success only in the UK, where his ambivalence about American culture and general cynicism were more socially acceptable.

Hicks’ intensity can make watching him at length a lot to take in; if you’re looking for a lighthearted evening of whimsy, you might want to look elsewhere. The documentary is well put together and makes for a good introduction to Hicks and his work. What it hits on rather well is that the things that made Bill Hicks a great comedian were also the things that made it hard for him to reach the masses. The America of the Gallagher Decade wasn’t the ideal environment for a drawling, raging pop philosopher with a scalpel wit and no commercial instinct. Watching footage of Hicks wondering aloud why he was nearly anonymous in the states, I wonder what he would have thought of his posthumous esteem. I imagine he would waste no time mocking it.

The music of Daniel Johnston could scarcely be more different from the comedy of Bill Hicks, yet there are also striking parallels. Both men were prodigies, both were raised in stifling fundamentalist religious settings, and both had contentious but loving relationships with their parents. But where Hicks was perhaps too clear headed to deal with the world as it was, Daniel Johnston is clearly living in a radically different world from most of us.

I first became familiar with Johnston’s music 10 years ago, when someone turned me on to his tape â€œSongs of Painâ€. Recorded in Johnston’s parent’s basement in West Virginia in the late 1970s, his early recordings are scratchy and stark. Johnston’s reed thin voice rises above virtuosic piano playing with incredible intensity over songs that range from nearly un-listenable to some of the most perfect pop songs ever recorded. His best songs have an indefinable quality to them, somewhere between unvarnished brilliance and the sound of someone coming completely unhinged. I was fascinated right away.

Johnston’s life story is, if anything, even stranger than his music. He grew up in the West Virginia panhandle, briefly attending Kent State university, where he developed an obsessive love for one of his classmates, who continues to pop up in Johnston’s songs to this day. He eventually landed in Austin, Texas (after literally running away with the circus), and has been an underground icon in Austin for the better part of three decades.

Johnston suffers from severe manic depression with frequent psychotic episodes, so there is always the uncomfortable feeling that there is an element of exploitation in his some of his popularity. Thankfully, the film treats his illness with compassion and understanding, and retells his most famous episodes (throwing the keys of his father’s airplane out the window because he thought he was Casper the Friendly Ghost, refusing to sign with Elektra Records because he was convinced that Metallica was possessed by Satan) in a way that avoids unseemly voyeurism. More than anything what comes across is that Johnston is a likable, talented guy, but also sometimes very frightening and hard to deal with. I think anyone who has loved someone with mental illness can relate to that. The film makes a point of playing up the parallels between Johnston and fellow troubled musical genius Brian Wilson, and I think that is probably appropriate. Johnston is certainly every bit as troubled, and almost certainly a genius.

What these two films have most in common is the way that they highlight the importance of art as a catharsis, and the power that the act of making art has over the artist. One senses that for artists like Johnston and Hicks, the compulsion to create is a constant companion, and an obsession unrivaled by any other.

One comment to “DVD review: 2 Great Documentaries about 2 Visionary Weirdos”